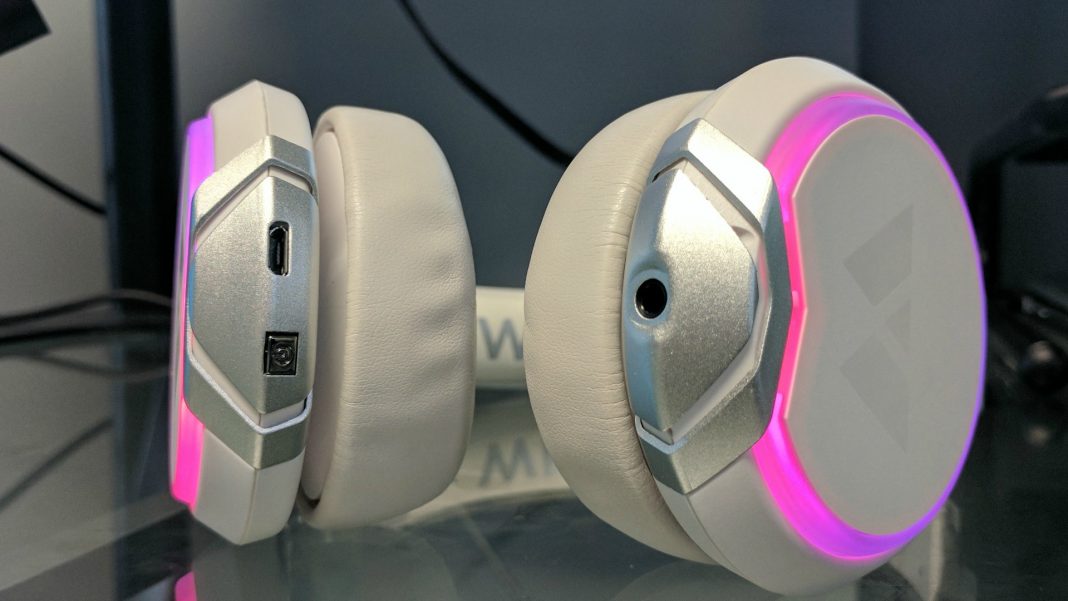 Be honest. You’ve been in a situation before where you’re listening to a killer playlist that you want to share with someone nearby. Man, you’ve picked out some great stuff! The problem, however, is that you don’t want to give up your cans. No, you want to enjoy that carefully curated set of music.

If you have earbuds, you’ll probably pull one out and give it to your friend in the seat next to you. Unfortunately, doing this gets rid of stereo. Moreover, it requires that you sit in very close proximity to the other listener. If you’re using on-ear over over-the-ear headphones, then you’re likely stuck.

The Wearhaus Arc seeks to fix that problem.  Billed as the first “social headphones”, these let you sync up with other friends so that you can listen together. Available in black or white, these wireless headphones let you keep listening to that playlist while your friend joins in with their own pair. 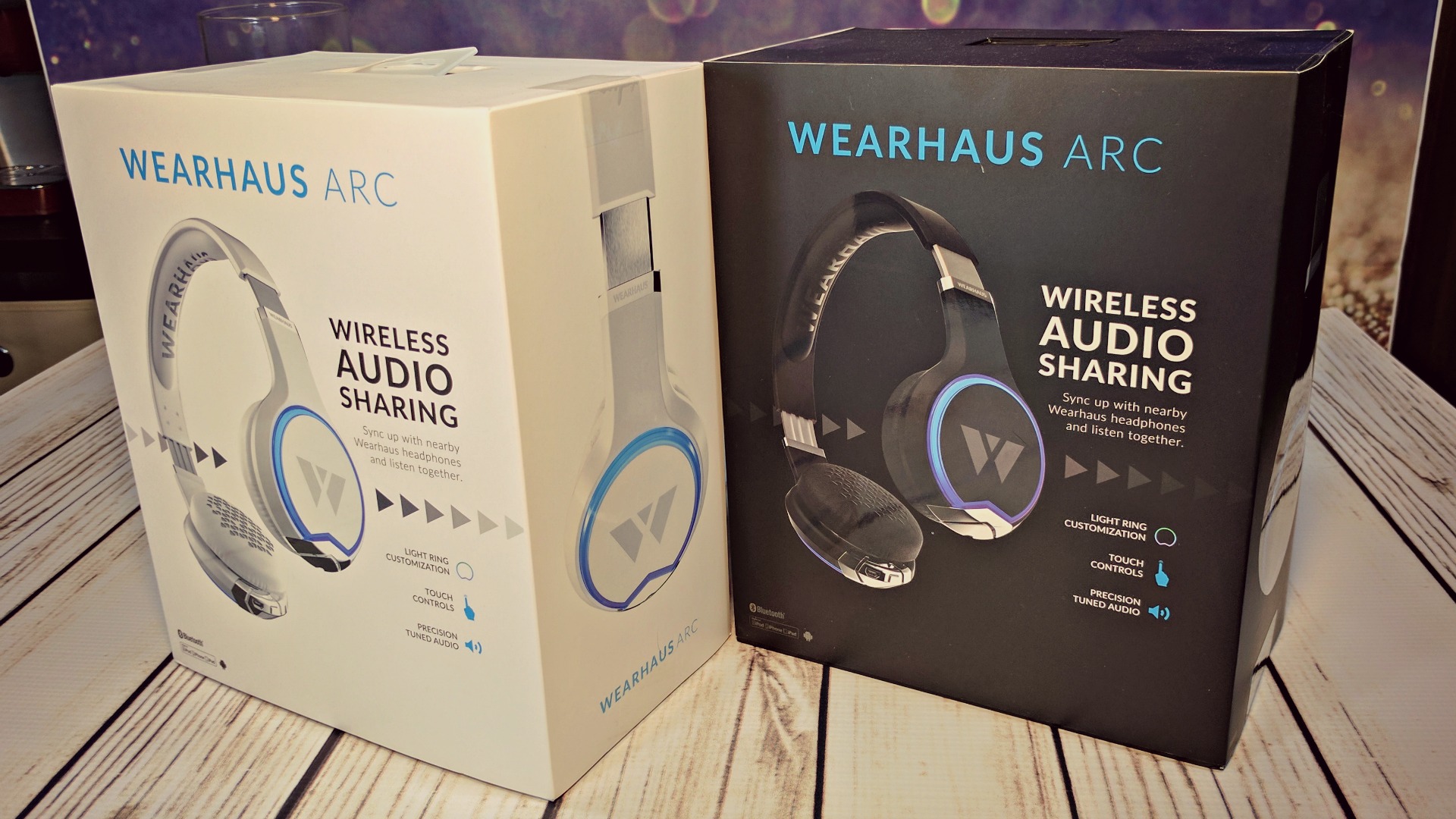 Initially offered through Kickstarter some years ago, the Wearhaus Arc are now available in brick and mortar stores. As of mid-April the headphones can be purchased in Fry’s Electronics store. This is great in our opinion as you’ll want to experience this in person. While it’s easy to envision, there’s something really cool about actually doing this in the real world.

Setting up the Wearhaus Arc was quite easy in that you basically start out as a single user. Power on with a long press and then pair to your phone.  A voice prompt signals your connection is done at which point you can go about your listening in a standard manner.

If you have a favorite music app or podcast app, feel free to get going. The internal microphone allows for you to take calls; a future firmware update figures to enable active noise canceling. 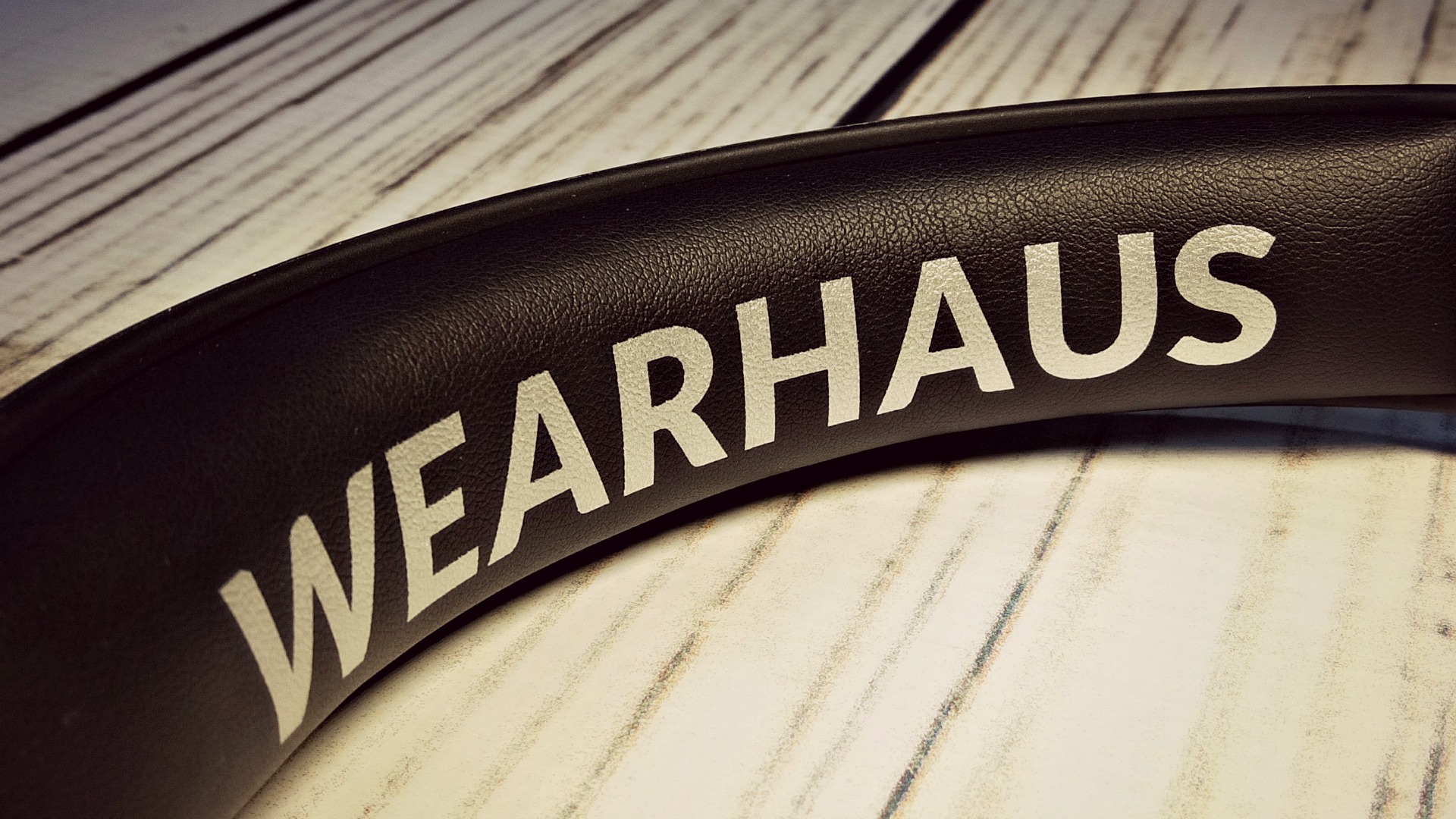 Pairing a second set of Arc headphones is a little more involved, although not by much. To do so, tap and hold on the right ear cup until you’re prompted with “ready to share”. At this point, swipe forward and enable the broadcast mode. To ensure this is working, glance at the outer part of the cups and look for blue and red light cycling.

Now, grab the second pair of headphones and do the same thing: press and hold the right ear cup. Instead of swiping forward, you’ll go backward to synchronize. Again, look for the colors. A voice prompt will confirm you’re all paired up and ready to roll.

The Wearhaus app (Android, iOS) is where things get really fun. It’s here where you get to customize the physical headphones. Do you have a favorite color? Select that for the ring around the outside of the ear. Indeed, you can choose any color in the spectrum or pick a tri-color palette. Or, even cooler, let it match the rings to your album artwork or let it pulse to the track. 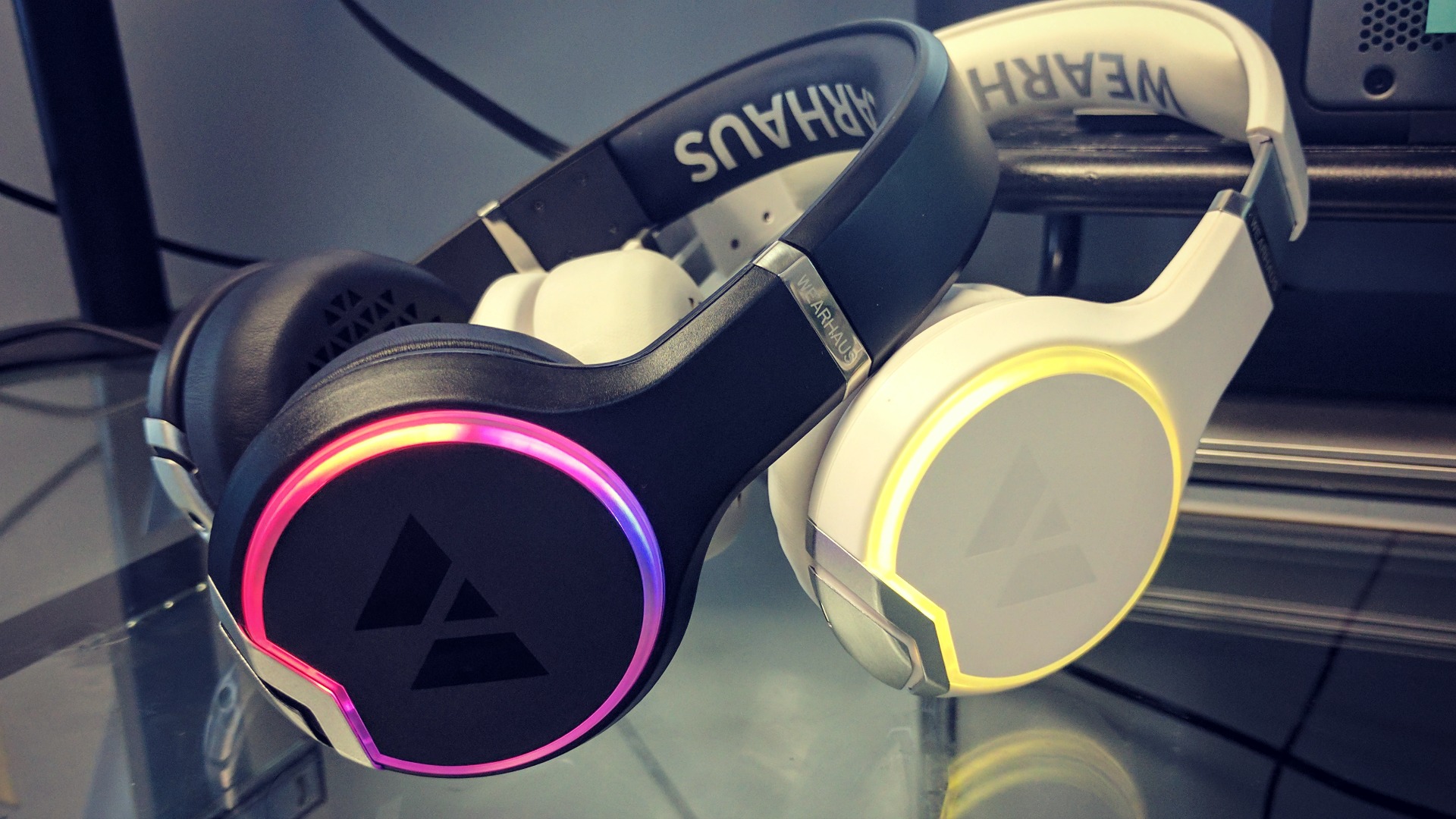 It’s worth noting that you can also turn off the color so that you’re not distracting anyone on the train or at work. The app also lets listeners broadcast or join a station making it easy to find or share music and audio.

If there’s one thing we weren’t fond of, especially at first, it’s the buttons. With nothing tactile to feel, you’ll be flying blind when it comes to adjusting volume or playback. Tap the right ear cup in the center and it pauses; a second one resumes. We definitely recommend leaving the sticker in place for a few days just so you can see the right orientation. 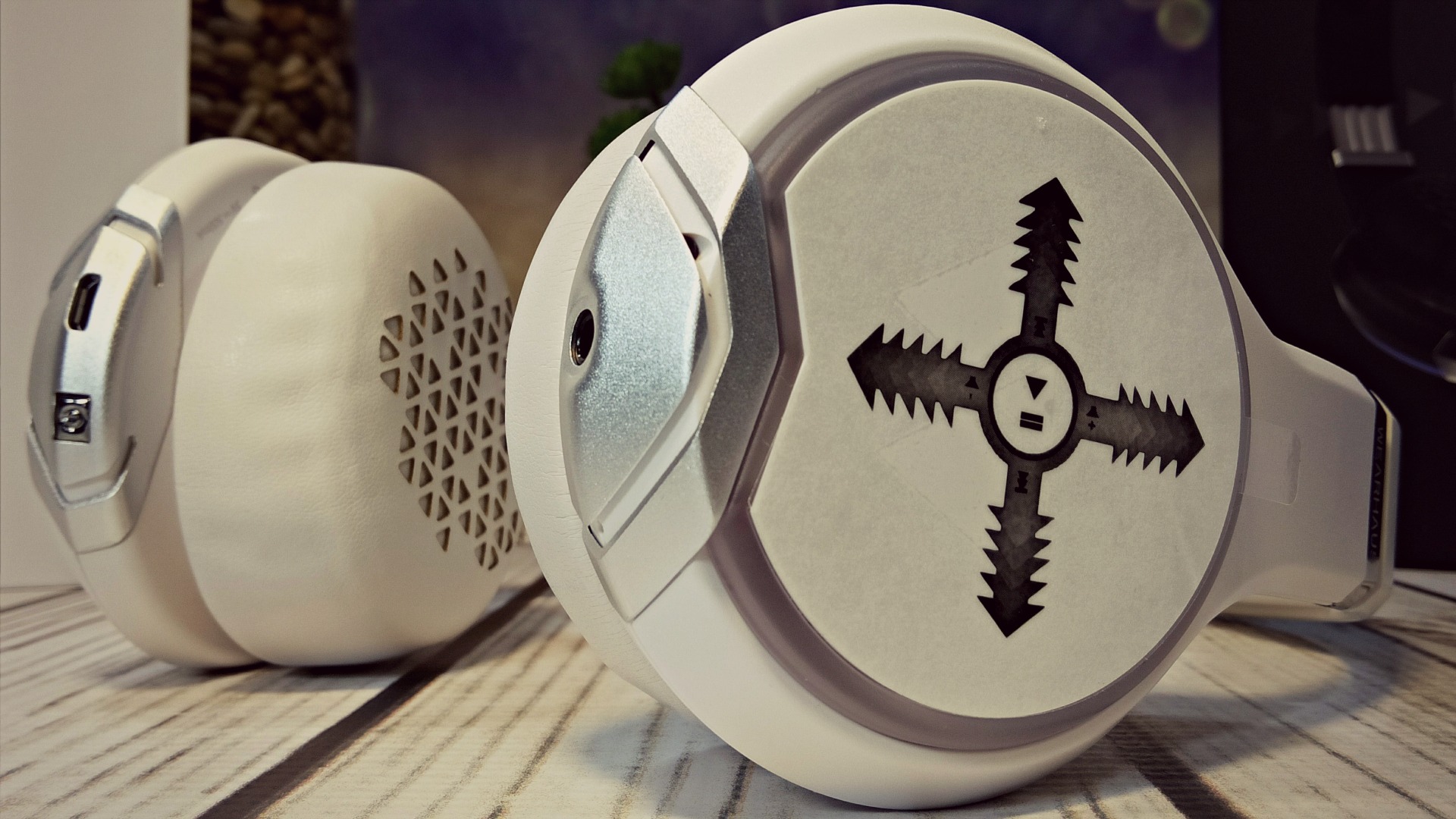 To turn the volume up or down, you have to do a gesture which starts in the center; tap the middle and slide a finger up to increase volume, etc. Skipping songs or backing up is done the same way, but swiping left or right across the cup. This proved somewhat maddening in the early days. We found ourselves accidentally pausing music or bringing up Google Assistant when all we wanted to do was back back up one track.

The battery life of the Wearhaus Arc is tremendous, providing anywhere from 15-20 hours of playback. Results will vary based on how much you are sharing or using the lights, but there’s no reason you can’t get through nearly a week of average music, YouTube, Netflix, and podcast streaming.

Although charging is done via a microUSB port, you might not want to put the headphone box away. There’s actually a small cut out in the bottom which turns the stand into somewhat of charging station. So, when you put them up for the night, plug in and top the battery off. Doing this almost ensures there’s enough battery for anything you’d want. 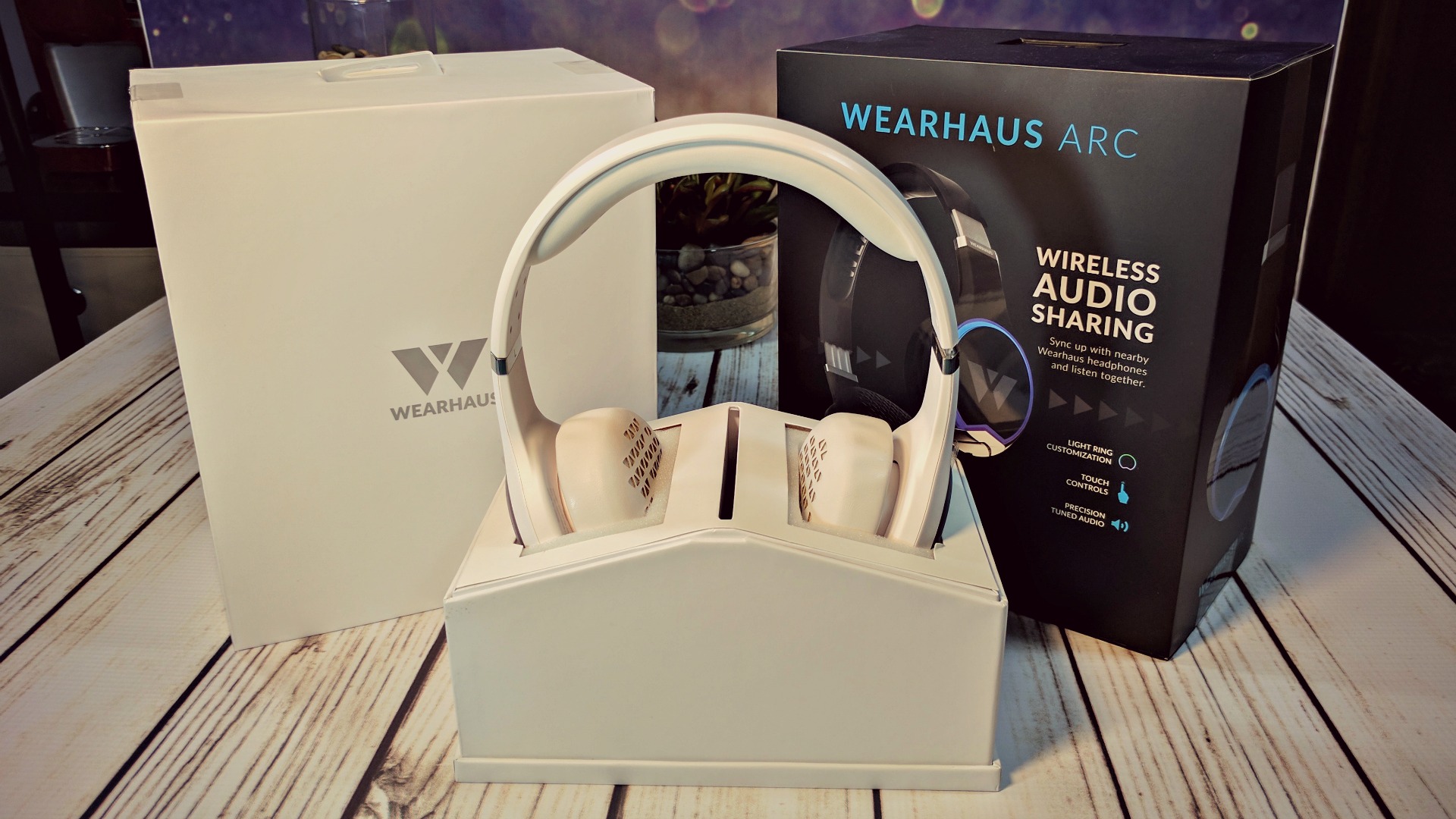 There’s also an included 3.5mm cord so you can directly plug in your headphones. This way you’re not using any of the battery. Moreover, you can also tap into pretty much any music source, including that portable game console that’s all the rave.

The Wearhaus Arc are comfortable to wear, even for longer periods. The faux leather feels good on the ears and never gets too warm or moist.  The same can be said about the arm, which includes a memory foam.

We initially expected the sound quality to not be all that great. Our incorrect assumption was that these were more of a gimmick headphone experience that was more about sharing and aesthetics.

We’re happy to say that these delivered rather consistent audio with a nice mix of highs to lows. Everything we listened to sounded as clear as we would have hoped just so long as we stayed below 75% volume. While things were as good at low volume levels, higher volumes would give us a somewhat muddy or bass-heavy experience.

If it were up to us, we might like some equalizer settings in the Wearhaus app. Even a few presets to help cover the general bases (spoken word, rock, hip hop, etc) could go a long way. Perhaps a firmware update might tune things a little different, too.

Speaking of which, as we were prepping our final draft, we learned that Wearhaus has pushed out its first major firmware update. Included in the update are “Cinema Sound”, new LED customization, and (ironically) Bass Boost. 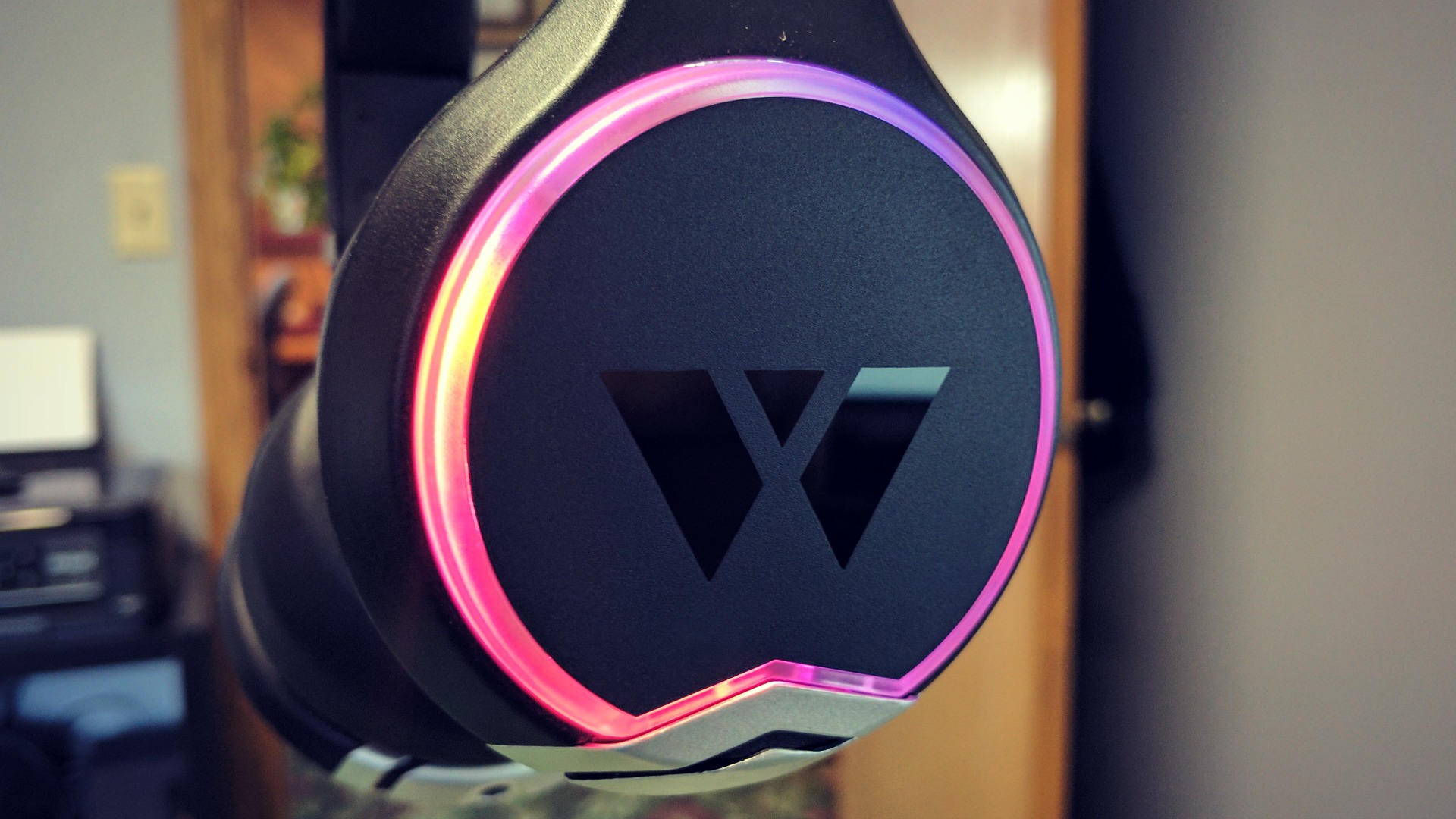 Sonos continues to be the first name in sharing or connecting audio across multiple speakers. Whereas each speaker works incredibly on its own, grouping two or more together really changes the dynamic in a home or office. To us, the Wearhaus Arc is a similar experience. We really like what we get for the $200 price tag, but when paired with a second (or third) set of headphones, things get much more interesting.

In addition to sharing music, we can also see the Arc working well for traveling. Pair a couple of them together and watch a movie on a tablet the next time you’re on an airplane. Ride the train into town with a friend or spouse? Why not catch up on the news or podcasts together?

You can purchase the Wearhaus Arc headphones at the Wearhaus website where they retail for $200. Additionally, the can be found at Amazon, Newegg, and Fry’s at the same cost. We’d like to see some sort of 2-for-1 discounted bundle but perhaps that’s coming at a later time.