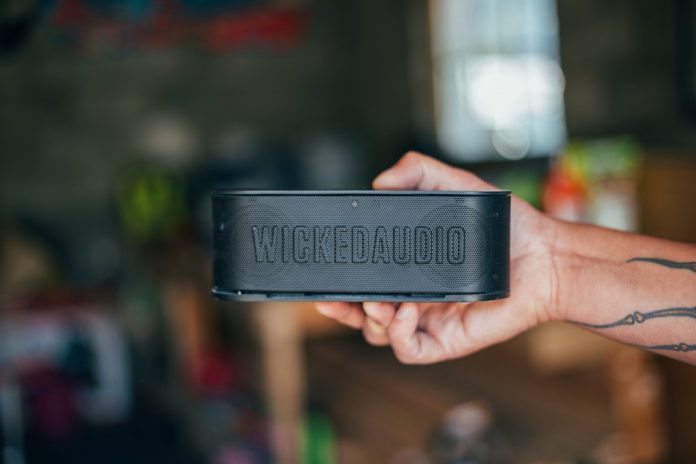 In the market for an affordable, quality Bluetooth speaker? You might want to check out what Wicked Audio has to offer.

A brand many of you are probably acquainted with (their products are sold via Best Buy, Amazon and more), Wicked Audio’s portfolio also includes two Bluetooth speakers. I’ve been testing them both for the last few weeks, and I have to say I’m quite taken with them. With competitive price tags attached to them, these two speakers provide a great alternative for music lovers who don’t want to spend premium on an entertainment device they might not use on a daily basis. 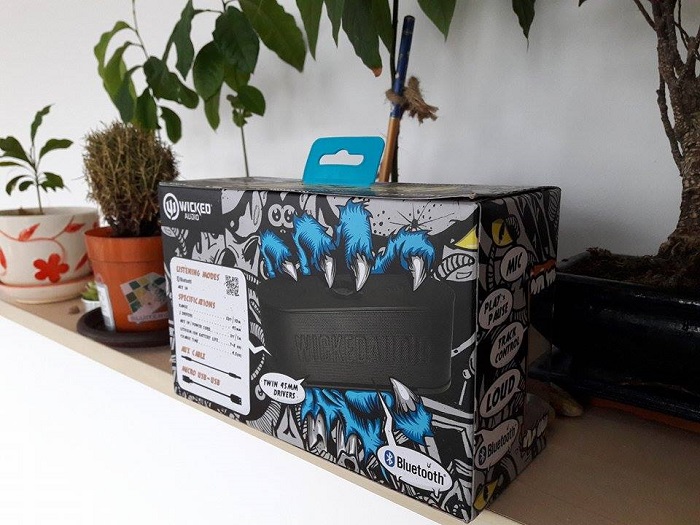 The first thing that struck me when I received the two speakers was the super cool packaging. I am an illustration/graffiti lover, and the their boxes were adorned with lots of fun art to behold. A real visual treat indeed and definitely something I wasn’t expecting. Also kudos for the name; Wicked Audio sounds a lot better than Sonos or Sennheiser or anything of the sort. 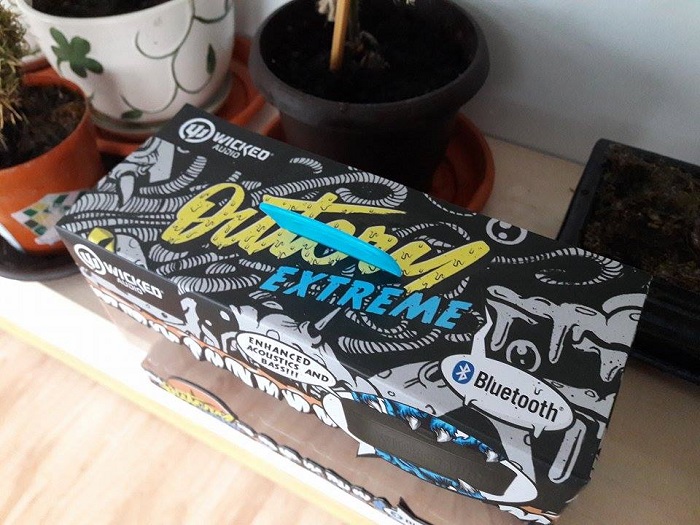 But what about the products? I’m getting there… 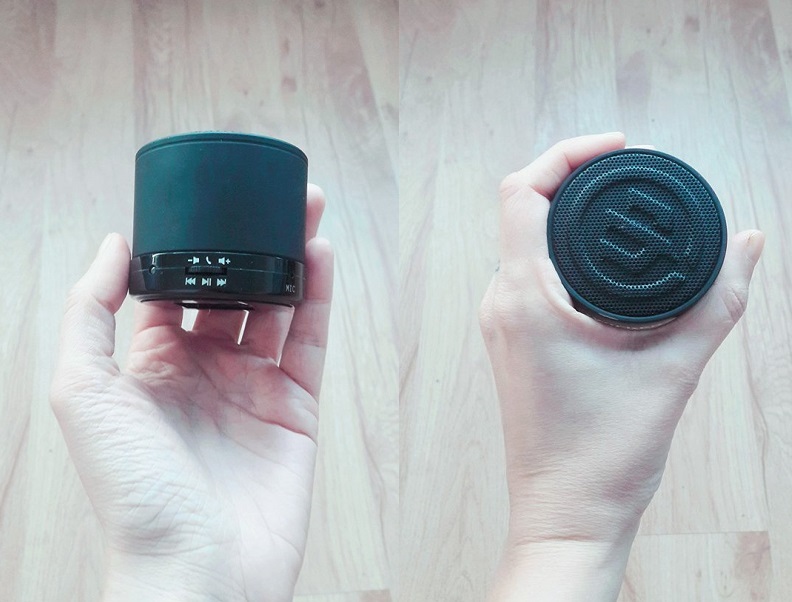 The two Wicked Audio speakers are named Outcry (the smaller, portable one) and Outcry Extreme (the bigger one) and you can get them set up in an instant. Just turn them on, while also making sure Bluetooth on your mobile device is also on. The Wicked Audio speakers should show up in the Available Devices section on your phone and from there you can easily pair them together. Note that you can only pair one mobile device to either of the speakers at a time. 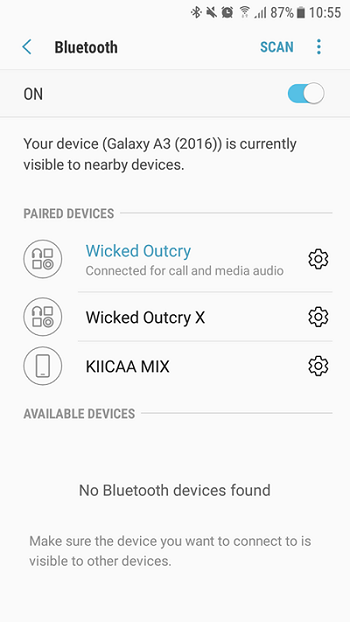 The smaller Outcry speaker is a tiny cylinder, that can fit basically anywhere (in your pocket, palm or in your bag/purse). It feels quite sturdy in hand, as it’s made of durable materials. It’s also water-resistant. The speaker grill lives at the top and that’s where the sound comes out.

The tiny Outcry does a pretty swell job of filling a room with music, even as it relies on a less than stellar 40mm driver. Portability is probably this speaker’s main selling point, as well as the fact that it features manual controls that let you adjust the volume on the speaker without actually doing so from the smartphone. 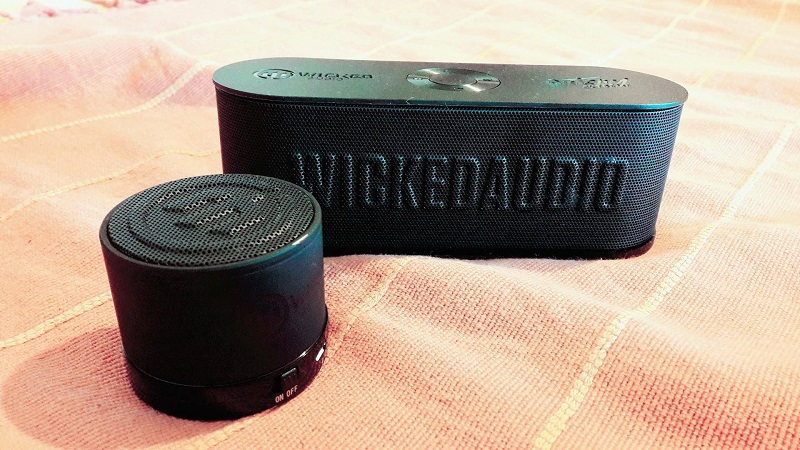 What’s more, as mentioned above the Outcry is pretty sturdy. I’m a pretty clumsy person and I must confess I must have dropped the speaker at least three times. Two times it was playing music, but it continued to stream the sound unperturbed. I could not spot any post-battle scratches on it either.

The mini speaker has a battery life of only 3 hours – which isn’t much – and takes up to 1.5 hours to fully recharge. Wicked Audio notes it has a Bluetooth range of 32ft/10m and in my experience of using it in my small apartment, I didn’t notice any connection drops.

What about the larger Wicked Audio Outcry Extreme? 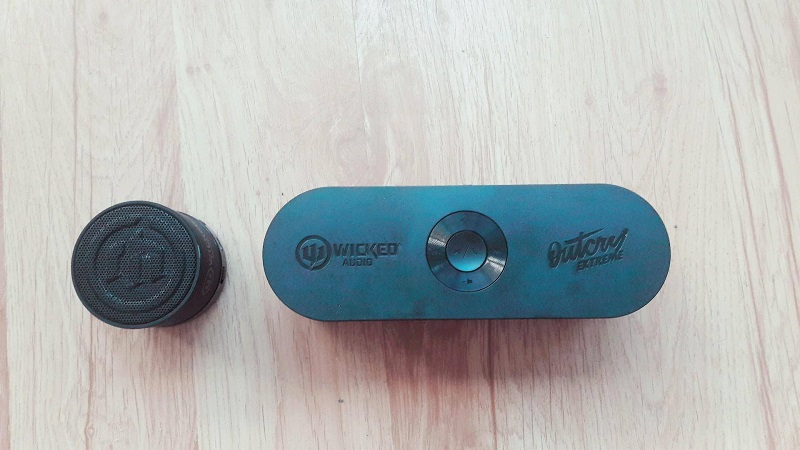 Despite the aesthetically pleasing package design, the Wicked Audio Outcry Extreme Bluetooth Speaker boasts a very familiar look. It’s rectangular in shape with rounded ends and features a grille made from metal that wraps around most of the speaker except for plastic-made top and bottom. Technically, the Outcry Extreme isn’t a true 360-degree speaker, but it does have sound coming out from the back, as well as the front.

The Outcry Extreme features an On/Off switch on the back of the device, alongside a 3.5mm headphone jack and microUSB port for charging. On top of the speakers, you’ll find the manual controls for adjusting volume, skip or play/pause tracks, as well as answering phone calls. 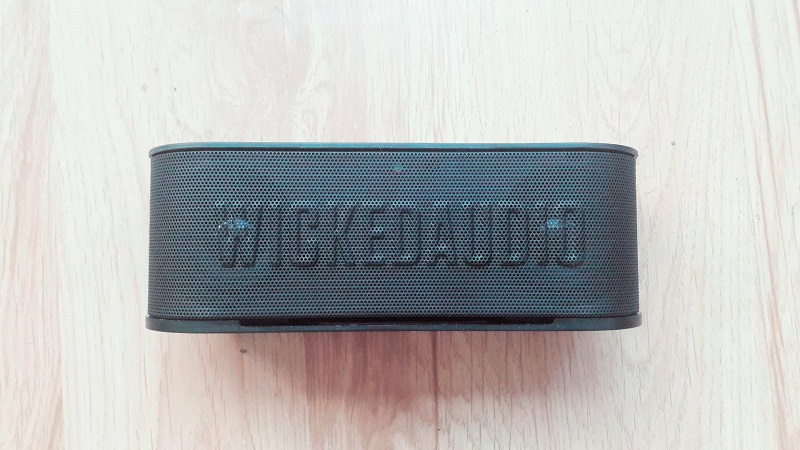 Like it’s smaller brother, it’s designed to entertain. Not only will the speaker provide a robust musical background, but it also put a smile on your face every time you connect (or disconnect) your phone to it. When the Bluetooth connection is lost or you disconnect it, the speaker lets out a frustrated “Grr” sound, but when it connects again, it will greet you with a goofy “Ding!”.

Moving on to sound quality, the Outcry Extreme features twin 45mm drivers that managed to do a pretty decent job when the sound volume wasn’t too high. When playing some tracks (mostly metal or rock) at full volume, the sound had a tendency to become quite distorted. Bass lines aren’t particularly striking either, although Wicked Audio promises “earth-shattering, rock you to the core, ghetto blaster bass”. Fortunately, if you have a music player such as nPlayer installed on your phone, you can use its embedded equalizer to enhance the bass experience. 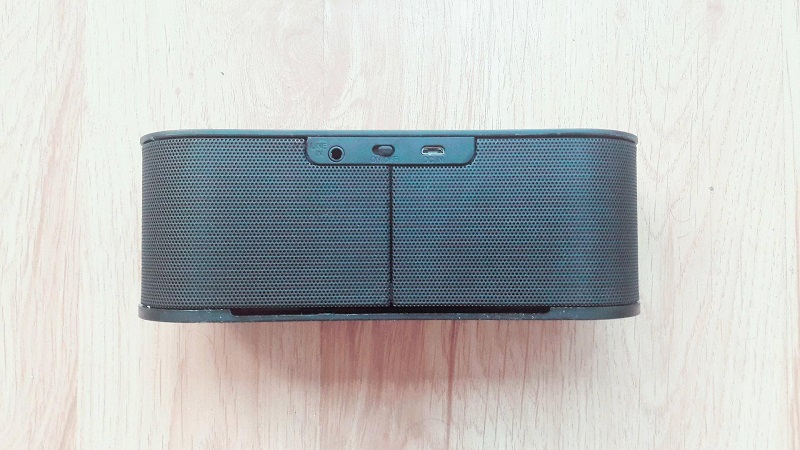 Obviously, the Outcry Extreme is louder than the tiny Outcry, but even so don’t expect it rattle your windows.

And here’s an observation that might prove relevant to some. The Outcry Extreme and smaller Outcry don’t shut themselves off when you disconnect Bluetooth or leave it inactive for a while. You’ll just have to do it manually, annoying as it might sometimes be.

The Wicked Audio Outcry Extreme offers up to 8 hours of audio playback but will take more than half that time (4.5 hours) to fully recharge, so it’s best to do it overnight.

The Outcry Extreme has the same Bluetooth range as the tiny Outcry (32ft/10m) and is also water-resistant, so it shouldn’t be harmed if you forget it in the backyard and a few drops of rain touch it overnight (although I did not test this scenario).

While the Outcry speakers don’t deliver the kind of audio that makes you feel you’re standing in a concert hall while the band is playing on stage in front of you, they do offer decent quality sound and set of functions without breaking the bank. Not to mention great packaging. The mini Outcry is available for $29.99 a pop, while the Outcry Extreme can be yours for $54.99. They can surely make for great Christmas gifts!