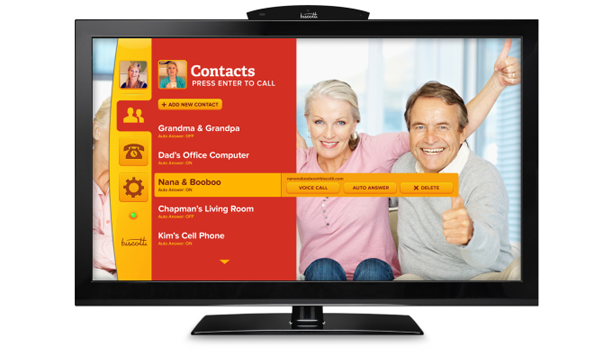 Video chat on an Android phone is pretty cool, right?  On a tablet, it’s even better.  But what about Google Talk on a television?  Awesome!  The Biscotti TV Phone is exactly the type of gadget that allows for this service.

Hooked up to your TV via HDMI, the Wi-Fi Biscotti features a 5-megapixel camera and comes with a 6-button remote control.  The size of the device is nearly identical to the food that bears its name and sits on top of your TV set.

Able to work in a TV-TV capacity, Biscotti is also a great way to video chat with your fellow Android users. Perhaps the best feature in the Biscotti is that you can sit far enough away from the device as to not look silly to your caller.  What’s more, you don’t have to worry about that unflattering double-chin that accompanies video chat from your phone.  On second thought, maybe the feature we dig the most is that you don’t have to switch inputs to work – it pops up over top Law & Order!

Features of the  Biscotti TV Phone:

Pretty nifty stuff, right?  So how would you like to win one?  We’ve got a brand new Biscotti that we’re itching to unload on one of you guys and here’s how you can win!

In Brief:15 other Android things worth knowing (Nov. 29)