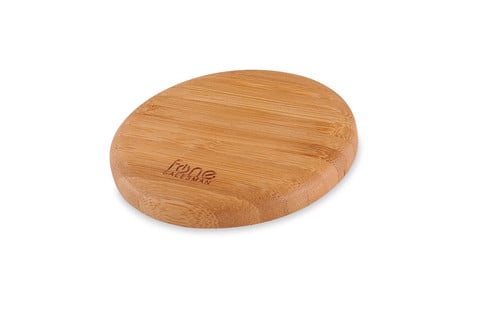 I have been intrigued by the idea of wirelessly charging my phones for awhile.  On several occasions I have thought about buying one of the wireless charging solutions on the market, but ultimately I talk myself out of it.  There have been a lot of reasons to avoid buying into the technology, but that is starting to change.  Prices are starting to come down, more companies are getting into the segment and more phones are compatible with the technology straight from the factory.  When I got the chance to review a new wireless charging pad, I jumped at the chance.  Specifically, I got the opportunity to test the WoodPuck wireless charging pad from Fone Salesman.

The WoodPuck wireless charging pad is a gorgeous example of the new generation of wireless chargers.  The WoodPuck is made out of bamboo which is a sustainable material.  I’m all for products that help to reduce harm to our environment, it’s an additional benefit that it looks so good.  When you open the box you are greeted with the wooden puck that is the charging pad.  Beneath the puck is the cord that makes everything work, it is a standard USB to micro-USB cord.  There’s not much to this device, the bamboo puck has a cut-out in the bottom that houses the electronics, but you won’t ever see that once you pick out where you want the charger.  Like I said above, the bamboo makes for a very attractive piece of tech.  You won’t feel bad about leaving this out on a desk or nightstand for all to see, although it is a bit on the small side.  It could easily be confused for a coaster the first time someone sees it, all that gives it away is the cord snaking out of the side.  Set-up was as simple as could be, just plug it into the wall and you’re good to go. 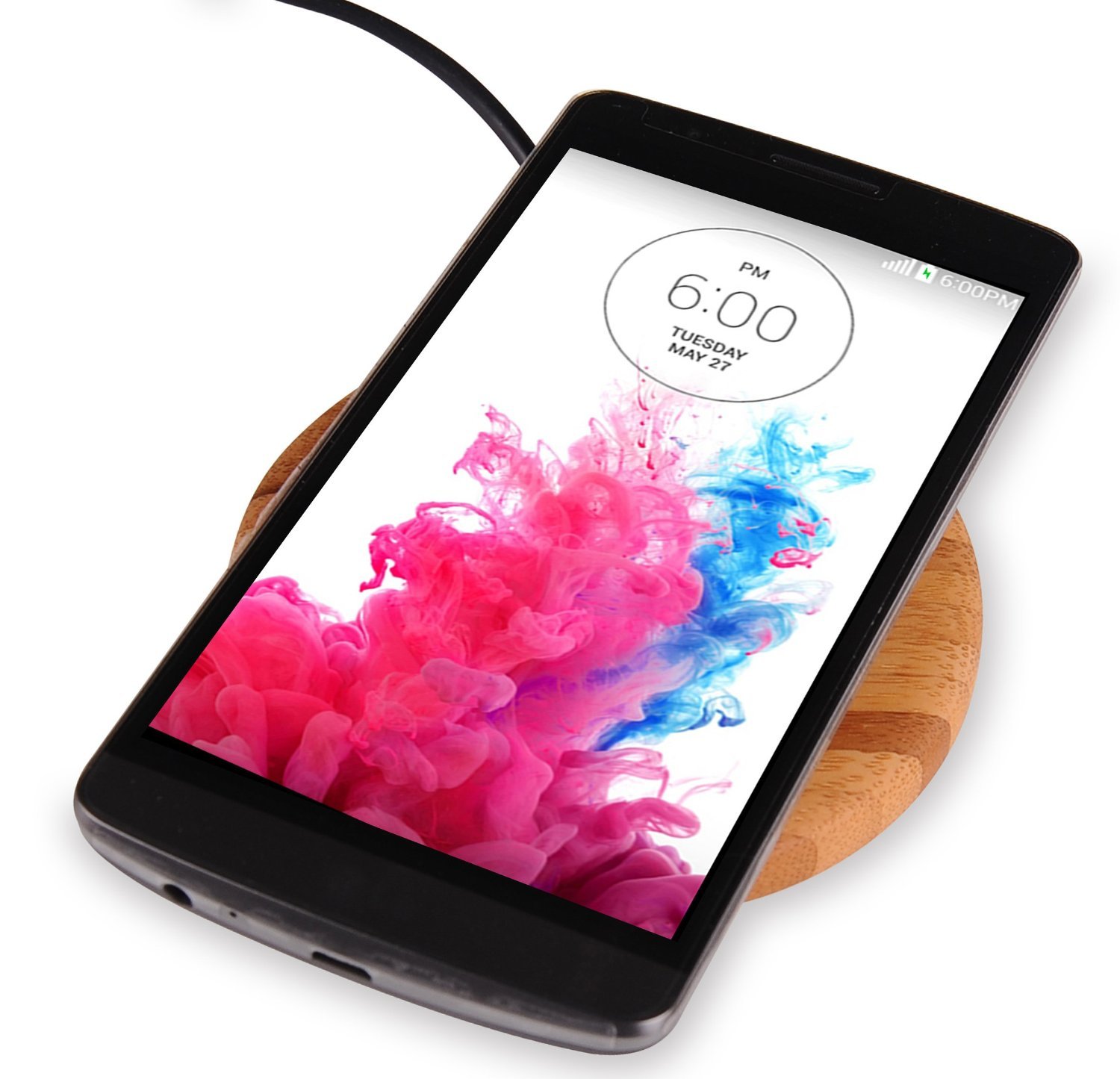 So I set up the charging pad and I’m all set to charge my device, right?  Well, not quite.  Right now I have an LG G3 from AT&T which isn’t Qi compatible.  I should have known this and planned accordingly, but the picture on the Fone Salesman website showed an LG G3 (the same picture above) on the charging pad so I didn’t really put much thought into the details.  I learned the hard way that no matter which way you put the incompatible phone on the pad, it just won’t charge.  However, all was not lost, a quick search on Amazon and I had Qi wireless charging receiver on the way.  I have to admit that I almost gave up at this point.  When I learned I needed to order an adapter to make my phone capable of charging wirelessly, I had visions of bulky cases that would turn my phone into an unwieldy beast.  This was part of the problem with early wireless charging solutions, there was almost always a bulky case involved.  Instead I found that wireless charging receivers have shrunk to the point they can probably fit inside the case you might have on your phone (check out the picture below).  After a couple days wait, I was finally ready to test the WoodPuck. 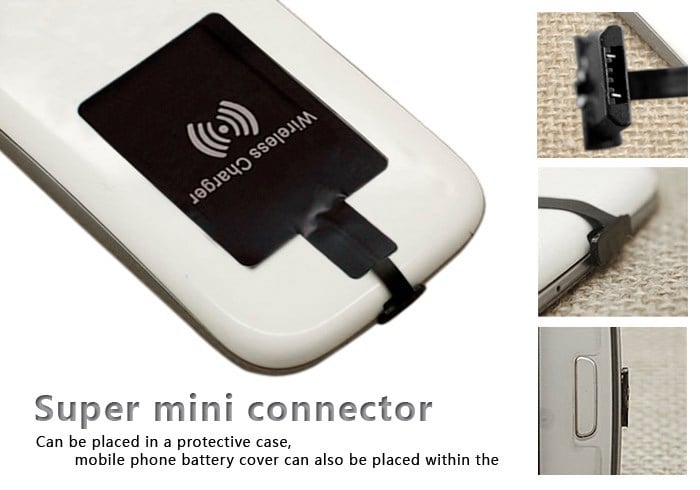 WoodPuck test, take two.  Now that my phone should work with a Qi wireless charger all I need to do, to charge my phone, is set it on the pad, right?  Well, I might sound like a broken record, but not quite.  When I set my phone on the pad for the first time a recurring “BEEP” sound filled the room.  I had never heard my phone make this noise so I figured it must be the WoodPuck.  After taking a look at the directions, I found that a recurring beep means that my phone and the charging pad don’t have a solid connection.  The directions told me that I should adjust my phone until I hear a single beep, this indicates that I have a solid connection and charging is underway.  I did as I was told and was rewarded with the single beep.  Finally, I had succeeded in charging my phone without any wires, never had I been so excited to charge my phone!  All seemed to be going well so I left my phone to charge in peace.

Several hours later I came back to check on my phone and things were not going as well as I thought they were.  While my phone was charging, it was doing so very slowly.  I had been told that wireless charging would be slower than using the old fashioned cord, but I was shocked by how little my phone had charged.  I thought that I should check my setup out before coming to any conclusions.  I went through the setup process again and even went so far as to move everything away from the charging pad (any metal, other cords, dust, etc.).  This time I put my phone down to charge as I went to bed at 1:12 AM, my battery was at 19%.  I woke up at 4:38 AM and my battery was up to 89%.  Usually my phone charges from near dead to 100% in a bit over an hour so this seemed like a long time to charge.  Using this system was a completely new experience for me so the fault might not lie with the WoodPuck.  There could have been several issues hurting the performance of the charging pad: maybe the WoodPuck wasn’t playing nice with the wireless receiver I ordered from Amazon; my setup could have been less than optimal; a defective part could have been hurting overall performance; or, this might be the regular level of performance and I didn’t have enough experience with wireless charging to know.  The point is that wireless charging has aways to go before the masses will adopt the technology.

After using the WoodPuck for the last ten days I came away fairly disappointed with wireless charging.  My biggest issue was definitely the extended charging times.  If I don’t start my day with a full charge there is no way I make it to the end of the day with a working phone.  This is a problem that will turn a lot of people off from wireless charging.  That’s the bad news though, there is a lot to like about the potential of this tech.  First of all, getting rid of cords would be great.  Secondly, imagine a world where wireless charging pads are built into restaurant tables or desks.  You could charge your phone almost anywhere without any extra equipment.  I have been hard on wireless charging, but if you absolutely want a wireless charger I can wholeheartedly endorse the WoodPuck.  The charging pad is made out of first rate materials and is absolutely gorgeous.  I have very few complaints about the actual WoodPuck.  First, it can be difficult at times to get a solid connection.  Again, this could be the result of the receiver I ordered, but sometimes it can take some work to get the phone situated just right.  Secondly, I think the charging pad should be bigger.  The WoodPuck is about the size of a standard coaster you would sit a drink on.  With smartphones getting bigger all the time, the charging pad should be big enough to accommodate them.  While I think wireless charging has aways to go, the WoodPuck is a great piece of equipment.  Just make sure your phone is compatible before ordering.