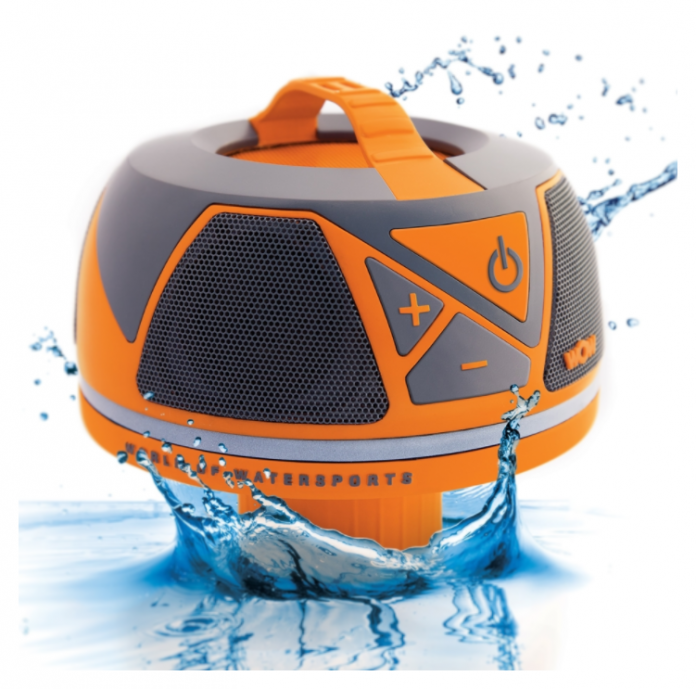 World of Watersports (WOW) is known for making some of the most popular inflatable rafts, pool floats, tubes and watersport accessories. Through the help of an IndieGoGo campaign, WOW has decided to dive into the world of waterproof, wireless speakers with the plainly named WOW-Sound Speaker. When hosting a pool party or a get-together at the lake, it’s important to have a good selection of music and a powerful speaker to blast those tunes. That’s where the waterproof WOW-Sound Bluetooth speaker comes in.

Designed to be used at the beach, the pool, while hiking or camping, the WOW-Sound speaker is colorful, portable and unique in design. WOW currently advertises accessories for holding the 3-1/2 lb WOW-Sound speaker that can keep it afloat while keeping your beverage nearby and cold. This unique angle gives WOW an advantage over some of its competitors–one that WOW hopes can be leveraged to sell more of its 50W Bluetooth speakers.

World of Watersports has done a wonderful job cramming in some great features for this Bluetooth 4.2 speaker. It includes an LED light with three different brightness settings, a handle for easy transport and a 50-hour rechargeable battery. Add to that a fully water-submersible shell that’s not only rugged, but fairly stylish, and it seems that WOW has a winner on its hands.

Having a speaker with a built-in LED light is something I never knew I wanted. While using the WOW-Sound speaker at a late-night get-together, I found more than one occasion where I was able to use the light on the speaker to search the surrounding area. The light can be set to dim, medium, bright or off by cycling through with one, easy to find button.

The speaker also houses a large power button as well as a dedicated button for both volume up, and volume down, which double as skip forward and skip back, if pressed consecutively. I wasn’t too fond of the button layout as it seemed somewhat arbitrary in design but after a bit of time, I had no problem operating the speaker without looking. A bonus feature that I discovered later, but was unable to test, was the pairing feature that WOW advertises; this allows two speakers to be paired together for a more immersive sound.

It’s not too often you’ll find a handle on top of a Bluetooth speaker but the WOW-Sound speaker’s handle worked perfectly for the times I wanted to get up and go. The exterior of the device is designed to be rugged, but I worried a bit about the thin metal grills that protect the 4.2″ active drivers. World of Watersports advertises this speaker as being “rugged for outdoor activities” but dropping this speaker on a rocky or concrete surface could easily dent in one of the metal grills on the outer edge.

Overall, the WOW-Sound speaker is fairly light, but it’s not meant to be portable enough to clip to a bike or toss in a backpack. Given the amount of features and the design intentions here, I never really expected to lug this speaker around on a long walk or bike trip across town. This speaker is meant to be thrown in a pool, a cup-holder on a raft, or on the ground next to a fire pit for hours of musical entertainment.

Battery life was very good, but I didn’t quite reach the 50-hour mark that WOW advertises. I assume this had to do with the volume level I sustained and the 50 hours would be attainable at a more moderate listening level. Still, I was impressed that the WOW-Sound speaker carried a tune for well over 30 hours at high volume. Given that the lights that circle the speaker are small LEDs, they seem to have little effect on overall usable time.

So what’s a Bluetooth speaker if it doesn’t sound good? Not much. Thankfully the WOW-Sound speaker delivers exceptional quality for the price. A total of three 4.2″ Neodymium active drivers paired together with a 4″ passive bass driver on top deliver clear sound at fairly high volumes. I was able to turn this speaker up to full volume without any discernible distortion. Music had clear vocals across multiple different genres and the bass was full enough that it never sounded flat or tinny. My neighbors were forced to listen to my music whether they wanted to or not as I blasted the WOW-Sound speaker at full volume.

After deciding to plunge the speaker into the pool (and even the bathtub once), I was concerned how the water might affect the overall sound. Again, thankfully this little speaker continued to bellow out crisp sound while it was in the water or out. The speaker is designed to float upright after submersion and did so every time I tossed it in the water. The 360-degree design was perfect for omnidirectional sound while wallowing about the outdoors. While this is not the best sounding $200 speaker I’ve ever used, it’s definitely the most versatile and retains an overall pure and commendably robust sound.

World of Watersports has hit the nail on the head here–a rugged speaker with tech features around every corner. The inclusion of IP67 waterproof rating with a smart layout provides for a perfect summer speaker that everyone will adore. If WOW can effectively advertise and demonstrate the power and flexibility of the WOW-Sound speaker to its intended audience, there is no reason this little powerhouse can’t be a rousing success.

Right now, you can still back the speaker on IndieGoGo. It’s at about 80% of its funding goal as of the time of writing. You’re still able to take advantage of the featured perk and get the speaker for $150 (expected shipping of June) instead of full price, $229. There are also additional perks available like the WOW Speaker Float for $19, Float Fridge 30-pack Cooler for $45, and a 2-pack of the speaker for $300. The campaign ends on May 4, 2017, so get it while you still can.