Even when a speaker excels at one of these, it is generally at the expense of another. Friends, I have good news: I have found the one. The one speaker to end my search. The one speaker, to rule them all. The X-mini Clear. 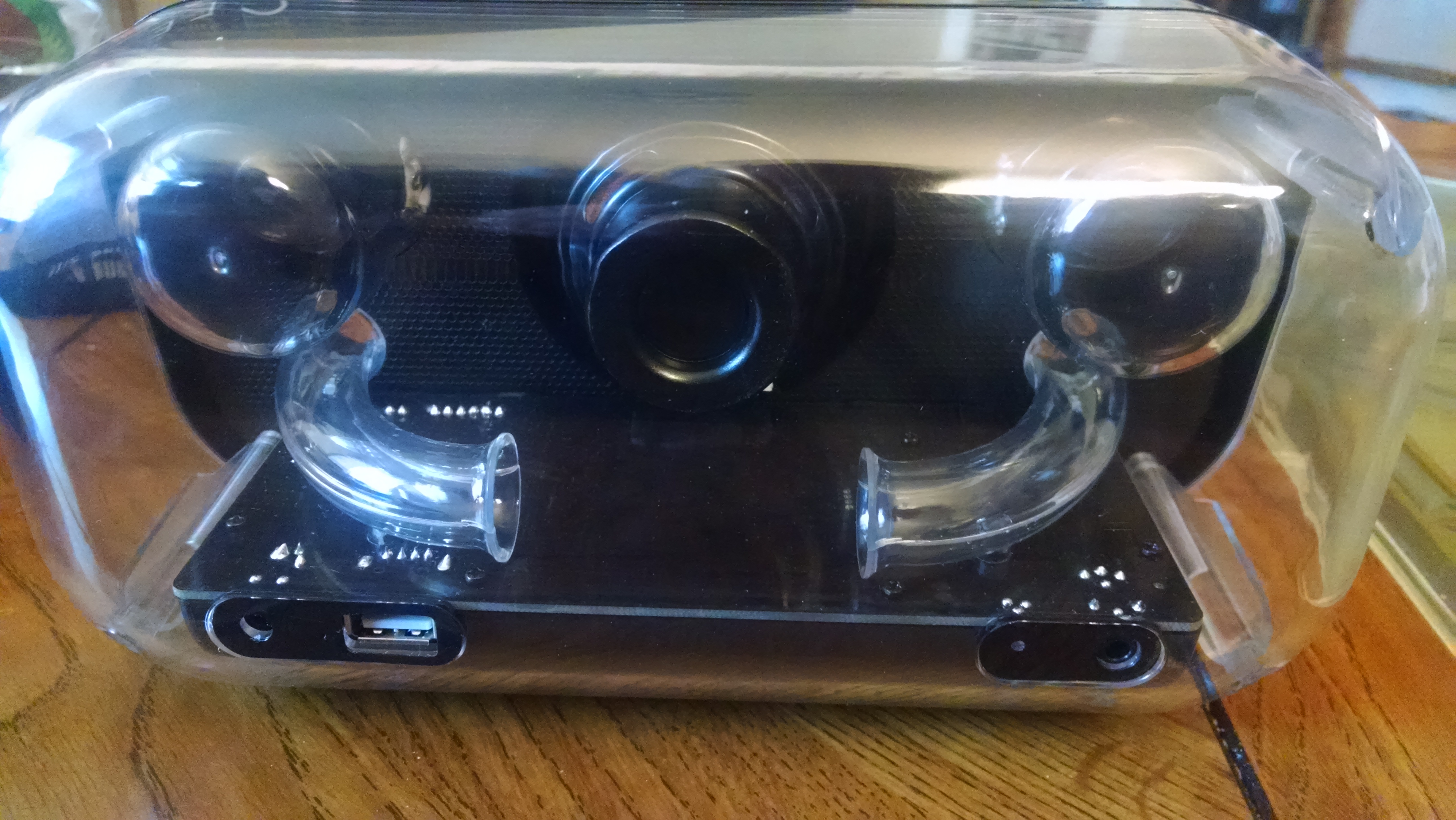 Let us start with the first thing you see when you lay eyes on this speaker: the design. The X-mini Clear is meant to catch your attention, and it is not with some crazy picture or loud colors. In fact, it is just the opposite: it is the absence of color. Above you’ll see a picture of the speaker, and what you see is the back. There is almost nothing there. This makes the sound quality that much more unbelievable, but more on that later. 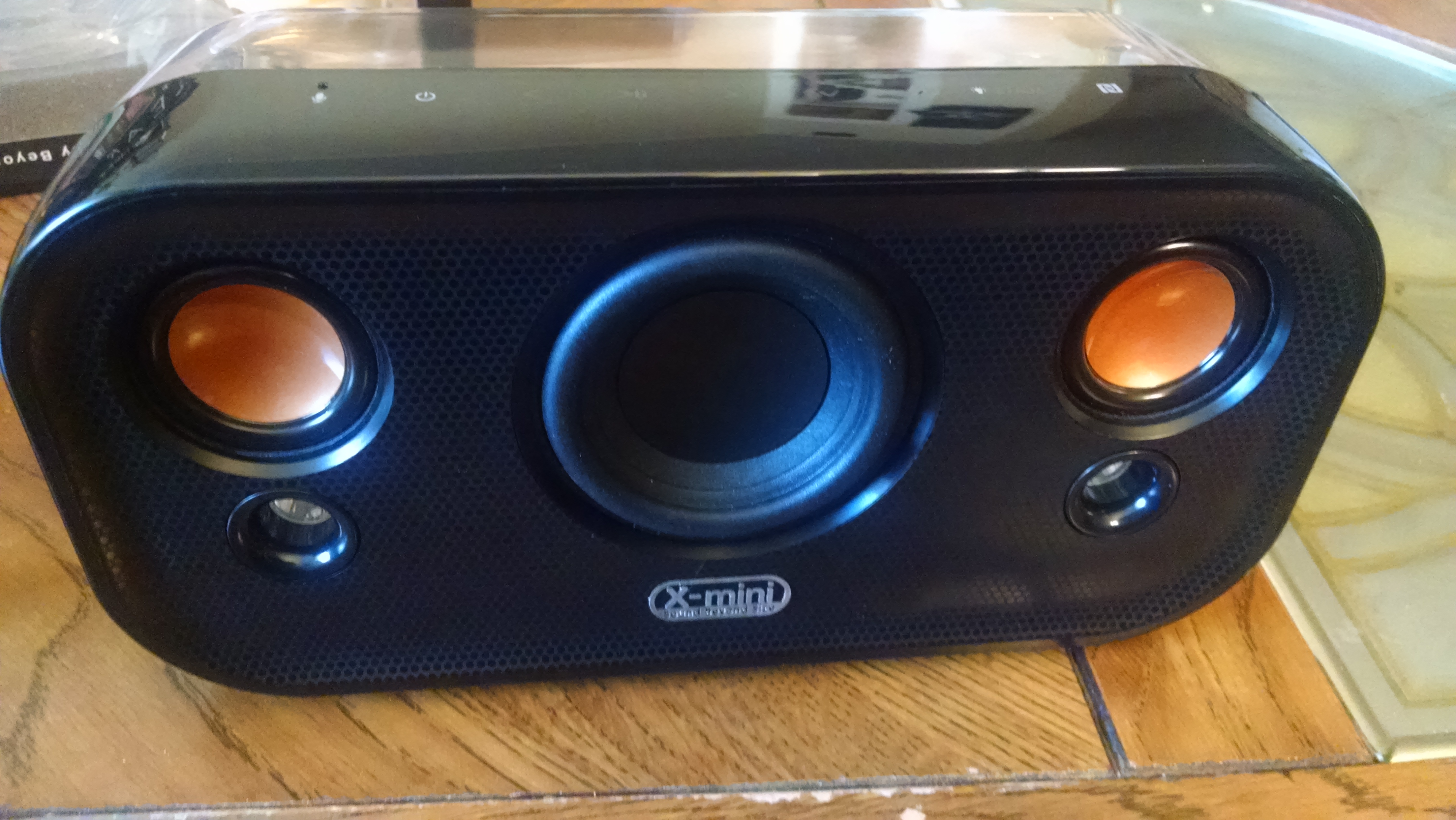 On the front you see the 70mm subwoofer and the two ceramic drivers. Below the drivers are holes where you can see the lighting shine through. Below the subwoofer is a X-mini label. Along the top are the buttons to control the speaker along with a couple of indicators. From left to right: mic, power, previous, play/pause, next, volume down, volume up, lighting mode/bluetooth-auxiliary toggle, NFC. 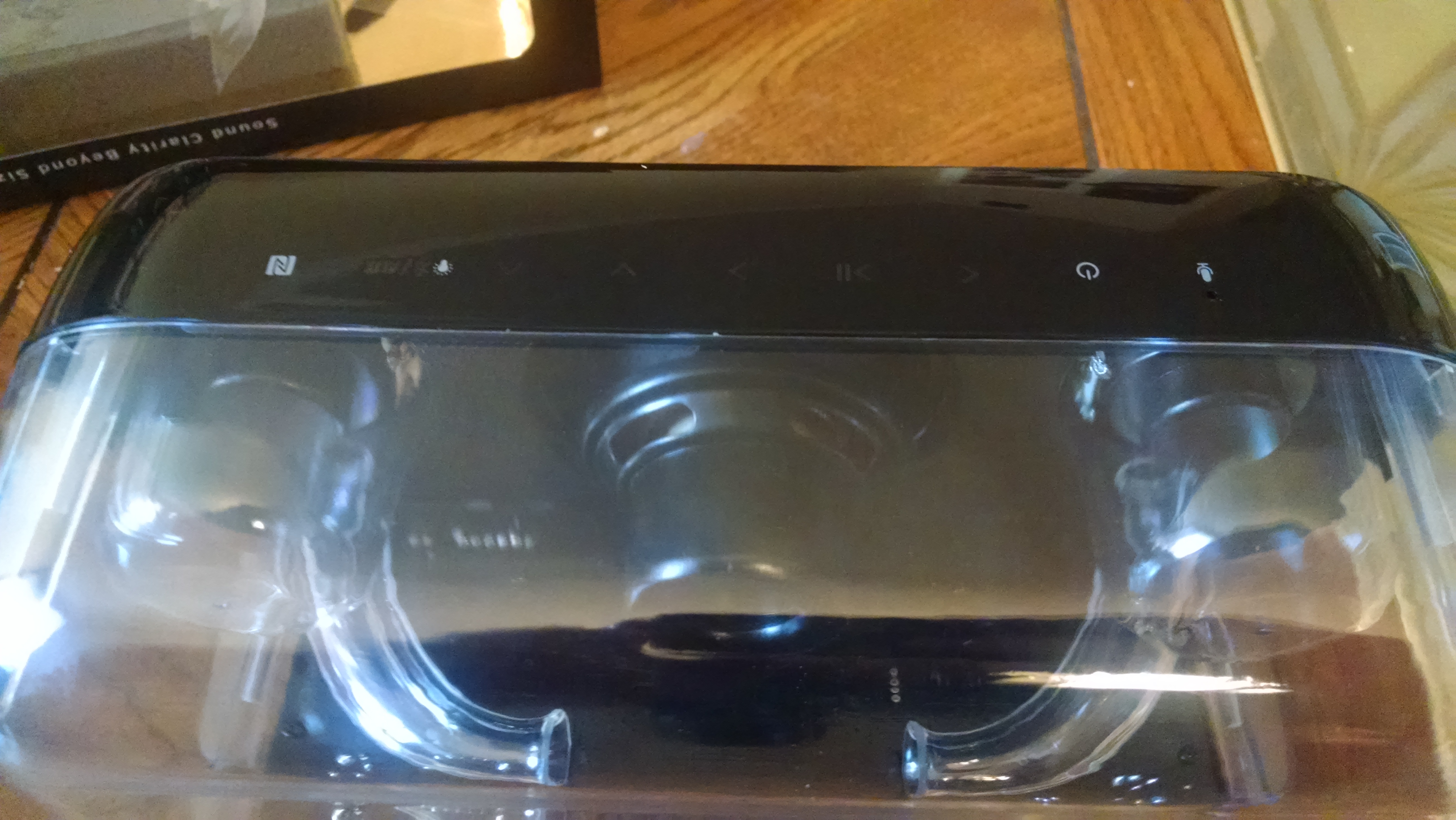 The buttons are touch-enabled, which goes a long way in making the speaker look sleek and modern, with backlights that are a burnt orange. My only real issue with this is when I first opened and tried to power on the device, I could not turn it on (yes, even after charging it for 8 hours). So with my inexperience with the device, I wasn’t sure if the button was even receiving feedback like a normal “button” would. However, after I reset the device I no longer had any issues from then on out. I was able to power on and off the device with no issues, and the buttons blink whenever you interact with one to let you know it is getting feedback. I came to appreciate the design of the buttons as it contributed to the overall experience.

While I was testing the X-mini Clear, time and again I was surprised (in a good way) at the sound clarity. It is not as small as some of X-mini’s other speakers, but by no means is it a large device. At 218mm x 89.5mm x 112mm and 920g, it is small enough to carry around easily in a bag. That being said, the custom 2.1 audio system they talk about is something to be proud of. I live in an apartment complex, so unfortunately I couldn’t enjoy the speaker at loud volumes for long periods of times, but when I did I was not disappointed. It was loud and clear enough that not only would you not believe that it was coming out of this speaker, but I’m confident you could use the speaker for a large party or an outdoor event such as being at the beach.

When I did play it, I could hear the highs, mids, and lows. I listened to 3 Doors Down “It’s Not My Time”, and I could distinctly hear the guitar, bass, and drums which tends to be drowned out on speakers this size. Not with the X-mini Clear. I have been told that X-mini specifically engineered the speaker to not overuse bass to feign good sound. Often people think because they can feel the bass in their headphones and speakers that they’re receiving “good sound” (I’m looking at you, Beats headphones). The X-mini Clear does not do this, but also does not leave out the bass, making a great balance with all the sounds. I can go on and on as I genuinely enjoyed this speaker, but I’ll stop there so I don’t lose you.

If you haven’t gotten the idea, I really enjoyed my time with the X-mini Clear. As I mentioned my only real issue was with powering on the device for the first time, but after that I’m not sure I have anything to complain about (believe me, I tried to find something just for the sake of making this a review as opposed to an advertisement).

I charged the device all of one time (when I first opened it) in my two weeks of use, and I used it at every opportunity I could. This encouraged me, since one of the common problems I have with wireless speakers as I mentioned above was poor battery life. I even used the speaker to charge my phone at one point (yes, you can do this) and charged it about 40%. Impressive considering it has a 6600mAh battery.

The pairing process with this speaker was a breeze. It has an NFC chip that allows you to simply tap your NFC-enabled phone onto the top of the speaker for initial pairing, and after that if both my phone and speaker was on and had Bluetooth on, I didn’t even have to think about it. In fact, a neat feature is if you have your phone’s Bluetooth on and your music app open (I used Google Play Music) with something in the queue, your music will start playing on the speaker when you turn it on.

Another neat feature of this speaker is the addition of “mood lighting”. The lighting has two different modes: one the flashes in time to the music, and another that simply fades in and out slowly (for those times when you need a little help from Barry White). While lighting on a speaker isn’t common, there are other iterations of this feature in other products where the lighting is supposedly in time with the music. With those other uses, I don’t find that it is very accurate and can give you a headache. However, on the X-mini I found that this worked very well, and others who saw it said the same. Since the case of the speaker is clear, the lighting is very well implemented.

For those who prefer a wired life (or simply don’t have a Bluetooth device), it has an auxiliary port. It also comes with a nifty dust cover that attaches magnetically (with which I had no end of joy taking off and putting on). This cover does not hinder the sound at all.

I only have one thing to say: buy this speaker, which you can do here. It is $199, but it is well worth it. Considering the battery, the ease of use, the phenomenal sound, and the design that lends you to believe black magic is involved, you can’t go wrong. My wife (who isn’t one to jump at spending money) even said we should get one. I’m not the only one either: X-mini has already sold out of X-mini Clears twice since its launch a few weeks ago. Alright, I’m done. If I go on any more it would be an advertisement.