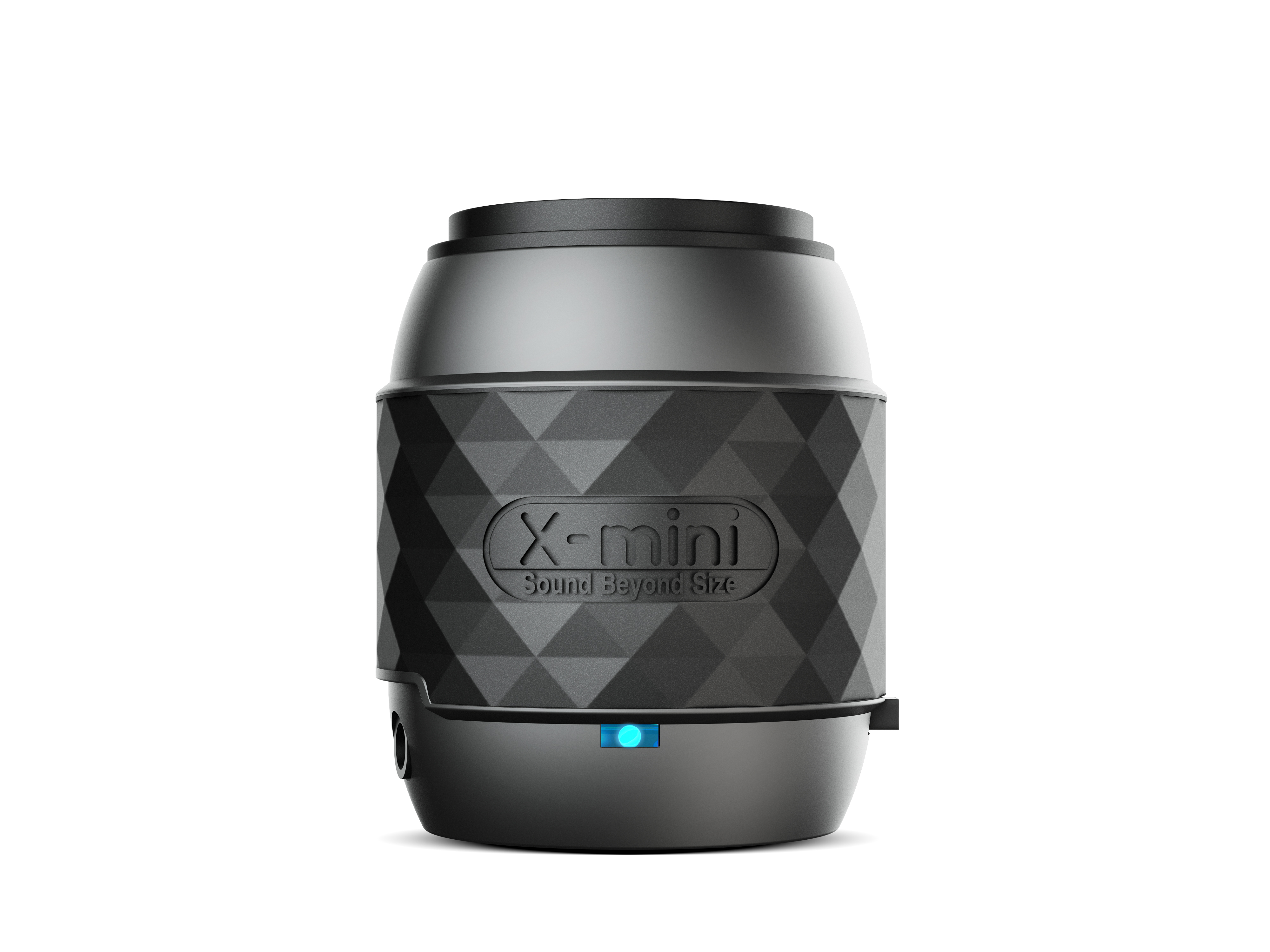 Following up on our post on the X-mini series, I had a chance to play with the X-Mini WE speaker for a few weeks. I’ll admit, I was pleasantly surprised. X-mini’s slogan is “Sound Beyond Size” and this miniature speaker had giant sized sound.

The X-Mini WE unit I reviewed was the version that had both Bluetooth and NFC. Two simple functions to make using the speaker as simple as taping the your devices together and flipping a switch.

When the package finally arrived, I could not wait to open it. Curiously inside I found this small little cube. I should have figured, I mean the speaker is called the “X-Mini”. To give you an idea of how small, let’s say the total package was about the size of a Rubik’s cube. Inside I found some basic instructions, a strap for the speaker, an I ♥ X-Mini sticker, and a nice little cable array. This cable had three connections, one being a USB for charging, a Micro-USB to go to the speaker for charging, and an audio cable. The interesting thing about this is that you would connect the audio cable to a laptop, and the cable system converts the analog audio into the Micro-USB that plug into the speaker for charging. This eliminates the need for two audio cables, which if you ask me is a plus.

Now that the speaker and accessories are out of the box, you have to imagine the size of this speaker. It is small. I truthfully did not expect much. It is only 48mm x 40mm with a weight of 48 grams. Even with the added functionality of both Bluetooth and NFC, this version only weighs 4 grams more than the non-Bluetooth/NFC version. It is small and light which means it is very portable. You can literally attach it on your keychain or carry it in your pocket. Despite the miniature size, the device seems very durable. I would think it could survive a couple drops without shattering into a million pieces.

As duly noted, the size on this device is one of the tiniest speakers I’ve ever seen. Let’s take a look and see what was jammed into the inner workers of this little beast:

For some comparison on size, I’ve taken a picture of the speaker lined up with a large sized paperclip. The second picture shows the width versus the same paperclip.

The only thing about speakers though is that while size matters for portability, the sound quality is ultimately what will make people buy or not buy this product. Getting sound out of my product was a little troublesome at first. I have two cell phones and a tablet. I was not easily able to pair the speaker with any of them on the first shot. I had to do multiple attempts, which included turning on and off the Bluetooth, turning on and off the speaker, and finally it would pair with the device I was looking for. I was never able to get it to pair with the device using NFC for the first time. I’ve always had to connect it directly via Bluetooth for the initial connection. Considering I had problems with all three of my devices, I would like to think that it was not user error. I will admit though, after the rocky initial pairing of the device, once the device was paired, reconnecting the device using NFC was amazingly easy especially compared to how difficult the initial pairing was. It was literally tap the bottom of the speaker against my device and three seconds later sound is coming from the speaker.

So now that it is connect, what song do I play? I pump on some Aerosmith with the song of choice being Mama Kin. I figured it being one of my favorite songs it would give me great comparison on what I am used to hearing versus what this speaker is playing. The sound is muffled. It sounds “OK” but it is not very clear and really not what I expected, not to mention the volume was a lot lower than advertised. That’s when I noticed that I was supposed to remove that little rubber cap on the top of the device. Apparently that is there to protect the speaker and must be removed before enjoying the music (insert DOH! here).

What a difference a rubber lid makes… Seriously. The sound comes blaring through this little speaker about double as loud as I ever expected. I have now listened to about 12 hours worth of music on this speaker since Xmi Pte Ltd was nice enough to send me one to review. I have gotten a decent amount of airplay out of the speaker and must say that the playback times and charge time seem to be pretty accurate depending on various factors. I averaged about three and a half hours per charge, which is probably due to the fact that I have had it on full blast every time the speaker was on. The only negative I found with the quality of sound is that I, as did our reviewer in the X-Mini ME hands on, found that the bass was a little lacking. This may be a trade-off due to the size of the speaker, but I will admit, it was not that big of a deal, especially if you are looking for a small size but loud speaker.

Overall I feel that this is a solid device. Price-wise, if you purchase it from Amazon, it is astonishingly only $39.99. I am giving this item 4.5 out of 5 stars. I deducted a half a star for the difficulties with connecting via Bluetooth initially and because it does need a small boost in bass. Other than those minor details this is an amazing device that offers durability, portability and sound volume that you would expect out of a larger speaker. The best part about it is that the price matches the size. If you are looking for a small speaker that you can pop out to enjoy tunes or watch a video on-the-go for under $50, then X-Mini WE is the portable speaker for you.

X-Mini Speakers | FindTheBest
Note: Select outbound links may include affiliate tracking codes and AndroidGuys may receive compensation for purchases. Read our policy. As an Amazon Associate we earn from qualifying purchases.