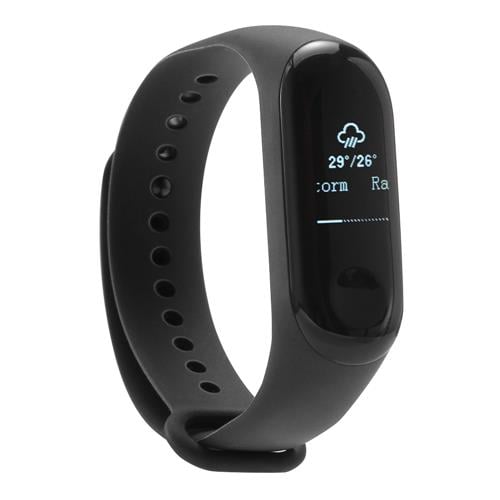 Xiaomi seemed to have a sleeper hit on their hands with the Mi Band 2; a smartwatch/fitness tracker that lacked several high-end features, but was offered at a price (about $20 US) low enough to tempt a whole lot of people to give it a try.

Including our household- I personally bought one for my wife, who to that point was not a fitness stats-based person in the least. While she was appreciative but hesitant at first, she quickly got into using it all the time; particularly with tracking steps or just using it as a funky little watch.

Now comes its its successor, the Mi Band 3. At about $40 US, you get an updated design (with multiple band color options in addition to matte black), capacitive touch interaction, sports modes, larger screen, water resistance, sleep tracking, weather info, and distance tracking are some of the big improvements you’ll find over the last generation.

The packaging to the Mi Band is pretty minimal, consistent with the device itself. You get the body floating front-and-center, with the band and charging cord hiding behind it. No wall pack is included; you need to supply your own.

Unfortunately, the cord is short, about 6″, with a proprietary 2-prong connector. The body snaps in & out of the strap and slides into the charger on its own.

One of the biggest changes to the Mi Band is its looks. In contrast to the Mi Band 2, the main body now sports a super-glossy water drop-type rounded oval to it. It almost borders on gem-like shininess, and you will likely get a comment or two while exposed on your wrist.

In contrast to the physical button from the Mi Band 2, The Mi Band 3 uses a capacitive button low & center. The rest of the screen is also capacitive, allowing navigation by swiping through screens as needed. Another change is the screen has grown from 0.42 inches to 0.78. The pixel density is plenty high enough for detailed text, though the brightness can struggle a bit in bright sunlight.

The silicone band is very comfortable (the Mi Band 2 was also a comfort winner), split between the soft material feel and the generally diminutive stature of the entire device. Unlike a lot of smartwatches/activity trackers that seem to get progressively bigger & bulkier with each iteration, the Mi Band 3 seems to disappear on your wrist with its small size and lack of bulk. With the sleep tracking functionality, this is especially advantageous as you could easily wear this device comfortably while snoozing.

Another main draw for me with the Mi Band 2 was battery life. Reading other reviews it seemed that one could get weeks of life with normal use. Read that again: weeks of battery life. That phrase is seldom heard beyond the e-reader realm. But it was true; we normally went 1-2 month between needed recharging.

Similarly, the same can be said for the Mi Band 3. While the display is nicer and brighter, a better chip-set and bigger battery balance this to give you a very similar battery life experience. Expect to go weeks between recharging. In the age of smartwatches barely going a day or two, this type of lifespan is beyond refreshing!

Also, Xiaomi added hearty water resistance to the Mi Band 3; offering a stated resistance down to 50 meters. Feel free to swim, bike or run in the rain, and shower while using your Mi Band.

The Mi Band 3 uses (depends, actually) on the Mi Fit app (found here in the Play Store). Once you download the app to your phone, you open it and set up your account for using the watch.

The type and breadth of info to capture on the Mi Band 3 is where its price starts to reflect what you get for the money. Heart rate monitoring is certainly available, though you do need the phone app within Bluetooth distance. Heart rate monitoring is manually activated, either on the watch or within the app. The accuracy of the monitoring was ok, with a notable delay sometimes in the numbers being shown on the display. If health-wise you’re beyond just a curious user, you may want to look for a more accurate device.

While you can track distance right on the watch, unfortunately, that’s really about it. Also, you can only activate activity-specific tracking through the app, not the watch; and if you want GPS-level accuracy to your activities, your paired phone needs to be in tow. Again, if you’re approaching a more serious approach to fitness, having to carry your phone with you could be a deterrent… a higher-level device may be better suited to you.

Within the app, the level of detail is not the most exhaustive. You can find and track your basic stats, but as with aforementioned metrics, if you’re looking to really drill down into your performance, you just won’t find it here.

All that said, the Xiaomi is not looking to challenge the extreme super-watches that cost hundreds of dollars here. In contrast, the Mi Band 3 knows exactly what it is, and who it’s for.

Its appearance is sleek and minimal. Furthermore, usability is very easy. If you’re new to fitness tracking, or just aren’t worried about uber-deep statistics, you get a colorful, well-designed interface. If you have any experience as a modern smartphone owner, battery life on the Mi Band is almost unbelievable.

Similar to the previous version, you can allow notifications to be displayed on your Mi Band using the settings within the app. This includes incoming calls, texts, alarms, and notifications from other apps.

As a result, the Xiaomi Mi Band 3 is everything it claims to be. If you’re looking for a simple-to-use, attractive, and functional device, you’d be hard-pressed to find a better option to give a new health tracker a try.