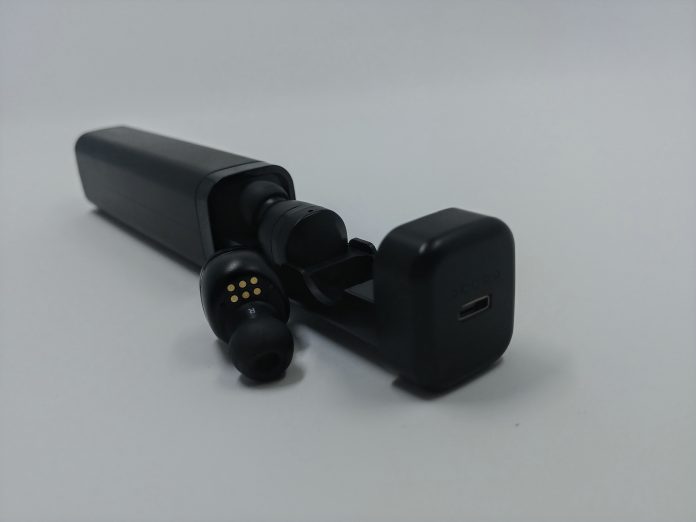 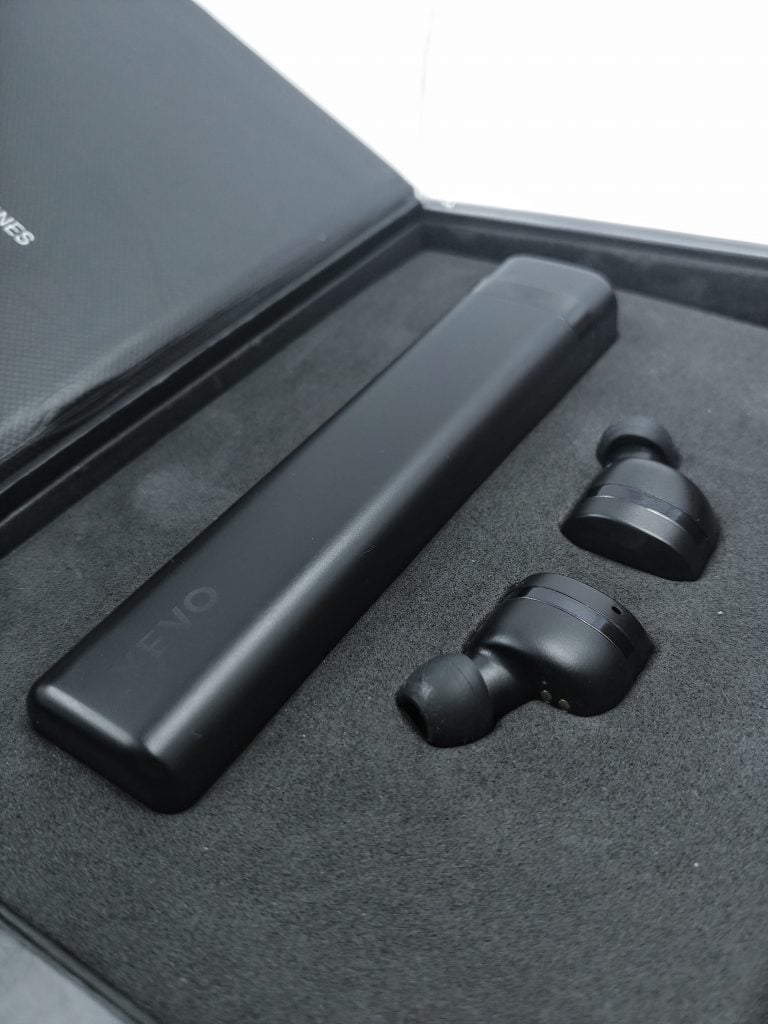 Unboxing Yevo’s first foray into the truly wireless market – aptly if rather unoriginally dubbed the 1 – is a bit of an adventure.The box is black, textured – almost (but not quite) leather-feeling – with silver foil lettering and a folding flap concealing the goods. Under said flap is a plastic covering (which by the way, is an absolute pain to put back in place), under which sits the Yevo 1, encased in foam. It seems like an awful lot of packaging for such a little thing. The whole package does have a premium feel to it, though it almost feels like faux premium. It’s tough to explain. Anyway! Packaging isn’t terribly important, as it almost always ends up in the trash about five minutes after the product is removed from it, but hey – why not mention it.

The YEVO 1 is built well. The semi-gloss finish is classy, reflecting a sense of class without picking up fingerprints the way full-gloss does. YEVO has conveniently included three different sizes of tips to fit all ear canals, which is more or less standard for earphones these days. The earbuds themselves are extremely smooth, utilizing a buttonless design and rounded pentagon aesthetic that differentiates it a bit from the standard bulbous earphones. The touch-based interface gives it a very sleek appearance, unbothered by buttons and charging ports. 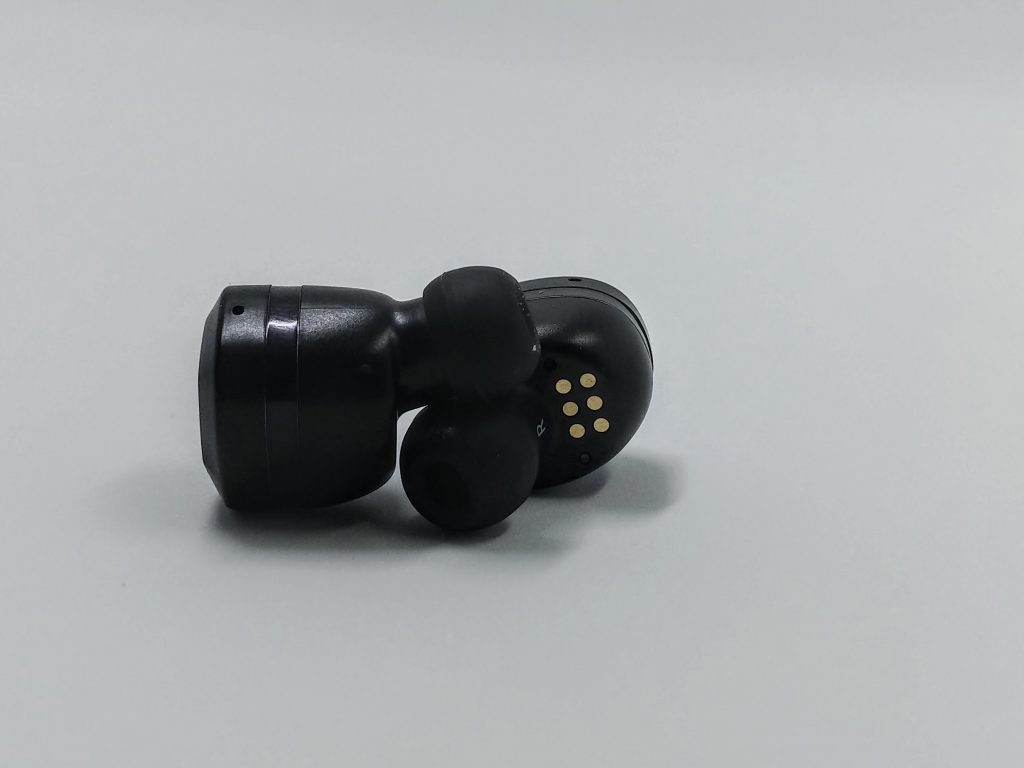 As solid as the design of the ear buds is, though, the case seems to lack that polish. It’s a simple design; a two-piece casing with an aluminum ring to cap it, and a sliding rack – inside which sit the earpieces. The casing is made of the same semi-glass plastic as the earpieces, but the seam between the two pieces of the case is very obvious. I feel like it would have been better suited as a single piece aluminum casing, rather than the two-piece plastic one, especially for the price tag.

The rack slides out of the case very smoothly – almost too easily, really – and the magnetic closure holds it closed admirably. Each earpiece fits snugly in the rack, held in place by the six charging pins that snap into the chassis when you insert them. The cap at the end of the rack – made of the same plastic as the rest of the case – also houses a rather-oddly shaped Micro-USB port and five small LEDs. These LEDs are clever in their implementations, displaying the battery life of the case when closed and that of the headset when open.

While I personally would have preferred to see a USB-C port – which would have allowed the case to serve as an external battery for a phone as well as for the YEVO 1 – and perhaps a more recent Bluetooth standard than 4.1 – the YEVO 1 nonetheless offers strong build quality and aesthetic anyone would be proud to be caught dead wearing.

I’ll get the bad stuff out of the way first; YEVO 1 utilizes NFMI technology, which while exciting in its own right is still a technology that’s very-much in development. It’s excellent when it works, but even when it doesn’t the drops and stutters are only occasional and never long. The touch controls, while creating a sleek, crisp aesthetic, are a bit unwieldy at times – the lack of tactile or audio feedback makes it tough to tell what’s going on, and clumsy to manipulate.

Now for the good. The sound quality is probably the best I’ve heard in a pair of truly wireless earbuds, with exceedingly crisp audio and high volume. As with all earbuds, the YEVO 1 struggles a bit with bass, but again – it’s probably the best of the ones I’ve tested personally. 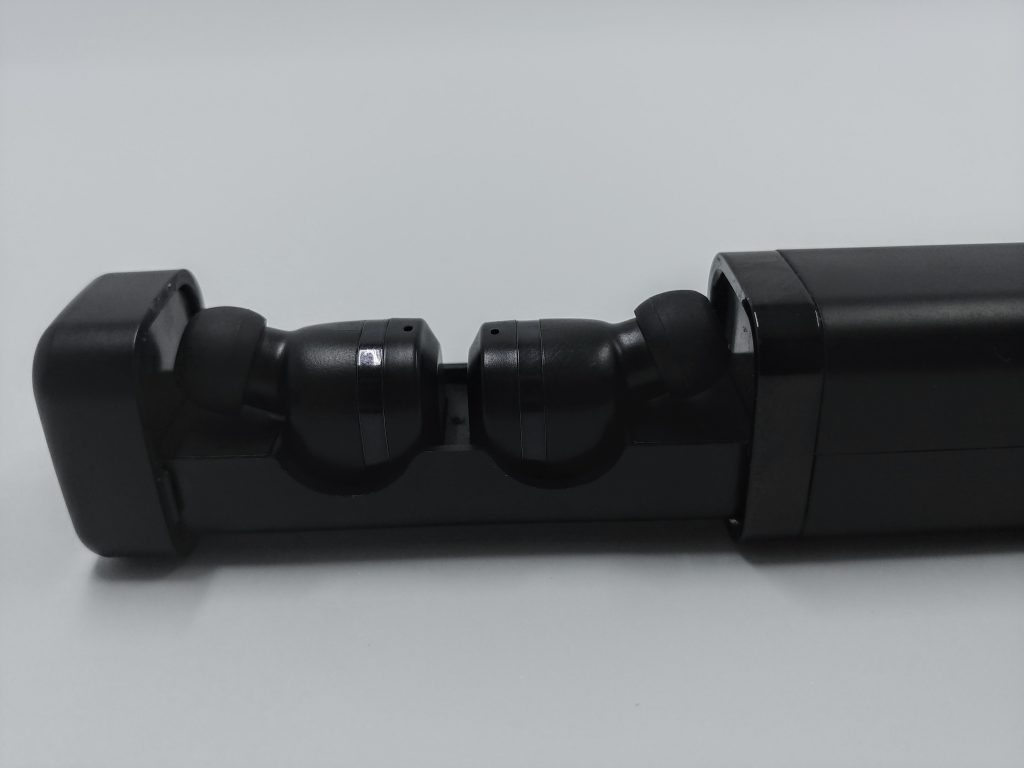 There are a number of great features packed into the little guys but my favorite is Audio Transparency, an adjustable setting that either allows sound from the outside world in, or blocks it altogether. This setting, like all others contained in the 1s, is configurable from the companion app – and it works really well. I was able to hold a conversation while listening to music with no problem whatsoever. It’s a little startling at first, but very clever once you get used to it.

The YEVO 1s are also compatible with Siri/Google Assistant/Cortana – a single, long press on the right earpiece pulls up voice commands for your favorite assistant. I wasn’t able to get Alexa to work on my V30, but I’m sure it’ll become available in time – one of the nice things about the YEVO 1s is that since it has built-in memory settings, it can likely be patched via software.

I’m just going to get this out of the way – $249.99 is a lot of money for a pair of Bluetooth earbuds – truly wireless or not. The Rowkin Bit Stereo is $129.99, Apple’s AirPods are $159, and even the Samsung Gear IconX runs $199.99. While I firmly believe that the Yevo 1 is better than both of those products, I still have a bit of trouble recommending them at that price. If you have $250 laying around, and if you want to get the cream of the wireless earbuds crop, the Yevo 1 is for you. If $250 is just too much, though, you can easily settle for one of the options listed above and probably sleep just fine at night with the decision.

Buy the Yevo 1 on Amazon