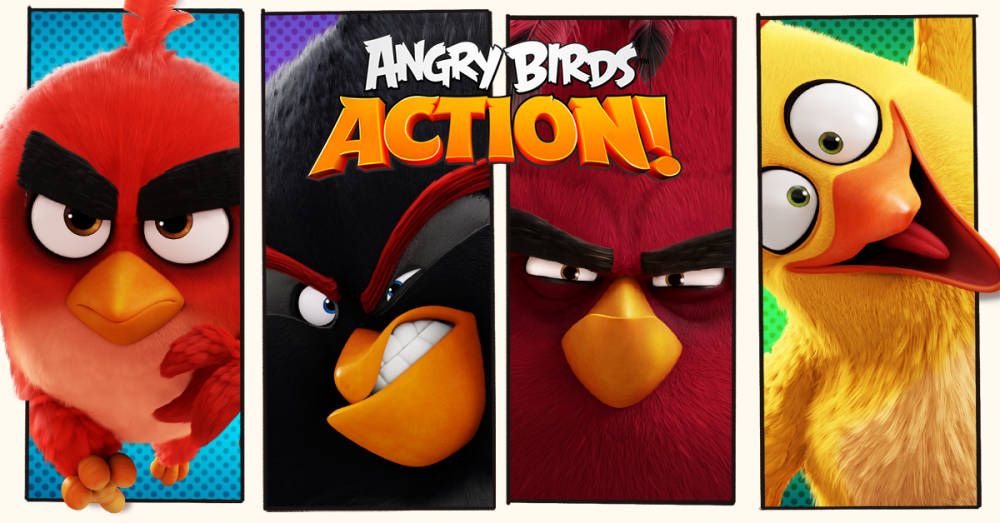 That crazy bird dynasty is back. Not that one, the other one: Angry Birds. It’s time for some crazy pinball action while Red leads the crew as they smash through different obstacles in their missions to save eggs and other various items. It’s the same Angry Birds you’ve come to expect, and deep down you know you love it. I mean – what is a smartphone without Angry Birds? It’s like Nintendo without Mario. It just doesn’t feel right.

If you have played any of the previous games, you won’t have any problem understanding how to play Angry Birds Action. On the off-chance you haven’t, the mechanics are simple. Tap and hold the bird, pull back, aim, and shoot the bird in the direction you want.

The biggest difference between the traditional games and this one is that, instead of total destruction, you have a goal to achieve in each level. It could be to save 2 eggs, get 3 baby birds to the nest, or a few other tasks. Accomplishing these gets harder as you go, so you have power-ups to help you along the way. Some examples are beach balls that make you bounce around more, snowflakes that freeze whatever you aim at (making it easier to bust up), or even turn yourself into a ghost to go through things.

Your team consists of Red, Bomb, Chuck, and Terrance. Just like the other games, they all have their own special abilities that will help you get through each level. Of course, you don’t get them right away: you have to earn them as you go.

You start each round by using a life to enter – you get three. You have to accomplish the goal set for you while trying not to run out of birds. If you do run out, then you have a chance to continue by using your gems. Gems can be earned throughout the game or you can buy them with real money. At the end of each round, you get a chance to win more power-ups by choosing from 9 different prize boxes. You can get up to three picks depending on how many stars you earned in the round.

While playing, you also collect coins which contribute to a goal that gets larger every time you reach it. Once the goal is met, you get a treasure box that has a prize inside.

BirdCodes is a special deal in which Rovio promotes the game as well as The Angry Birds Movie, coming out May 20th. These codes are special logos that you can scan to take a selfie inside the app. This will allow you to unlock mini games and earn rewards. These codes can be found in many places such as McDonald’s Happy Meals, PEZ candy dispensers, H&M apparel, LEGO building sets inspired by the film, Walmart and more.

Rovio is also giving more incentive to see the movie if you love the game. If you stick around for the end credits, then all you need to do is open the game and there will be a digital watermark that plays behind the end credits. This will unlock a whole new area of the game, plus an extra scene that can only be seen inside the game.

Just like most Angry Birds games, Action is easy to understand with no surprises, which is one of the things I like about this franchise. Rovio makes it so simple a five-year-old could play it. The graphics are what you’ve come to expect from the developer.

There are two things I would like to address. First, you have three lives to play the game. You use one to go into each level. After you use one, it takes about 20 minutes to restore it. That’s fine, but they really should give you five lives; three seems too few. You can get more lives quicker by using your gems and that’s probably the point, but I think five is a fairer number.

The second issue deals with a couple of glitches that kept happening. You can be in the middle of a level and then it would kick you out of the game completely for no reason. You then would lose the life you used to enter the level, in addition to any progress you may have made.

There’s also another glitch that happened during gameplay. While playing, the character would freak out and never stop moving. Again, this causes you to leave the game and lose your life. The second glitch doesn’t happen as often, but the first one happens more than you would like.

Despite the issues, I think this game is a very fun take on the franchise. I’m sure it’s a matter of time before they work the bugs out. It keeps in the spirit of Angry Birds while still being a different game. In this writer’s opinion, it’s better than Rovio’s other attempts at expanding the franchise.

If you hate the Angry Birds franchise, then you’ll probably hate this game as well. But if you found the originals fun, then you should have no problem getting into it. When it comes down to it, Angry Birds is one of the original smartphone games, and they continue to make quality material. It’s the franchise that’s here to stay.