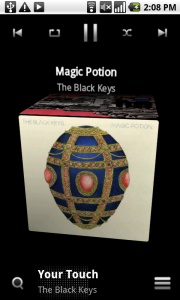 Back in fledgling days of Android, you may remember (if you were around) a paid music player replacement app called RockOn Music Player from developer Filipe Abrantes.  It used  a graphic UI for navigation and had a new and exciting look that was a big improvement on the stock player, it imported album art for you, and it allowed you to search for upcoming local shows via integration with Last.fm.

Now I am happy to say that the next evolution of music player from Filipe Abrantes, titled “3” (or cubed), is available in beta form from the Android market. In  recent conversation, he mentioned this project has been a collaborative effort, pulling in the skills of everyday Android users and friends who simply wanted to help out (João Seabra, Michael Lovett, Bruno Pugliesi, Henning Stummer to name but a few).

Admittedly the developer has stated that this will be replacing RockOn, which will be pulled from the market within the next two months.   However, in addition to being a replacement for an aging application, the developer has announced that  “3” will be free and, for all you developers out there, the app is open source!  (The source code is available here.)

Let’s talk UI.  Have you seen the stock android music player?  Functional yes, but visually boring.  Not exactly something you pull out and show people to impress them.  Enter “3.”  One of the most visually stimulating music interfaces I have ever seen on a cell phone.   Album artwork (which can be imported using the application) is placed on the panels of a 3-dimensional cube.  By swiping your finger up or down on the cube you rotate it and move through the artists and albums alphabetically.  Above the cube are the controls (standard skip forward and back, repeat, shuffle, play, and pause).  Below the cube is a spyglass icon used for searching for an artist or album, the name of the current track playing, and a queue icon which allows you to add the current song to a play queue, thereby creating a playlist.  In addition to displaying the name of the current track a soft grey bar appears below the name, and you can use this to scrub through the song.

The cube UI of “3” goes beyond mere novelty.  A swipe of your finger on the cube left or right will cycle through letters of the alphabet and allows you to skip to that section of your loaded music without having to scroll through every album cover.  This makes navigating in “3” a breeze, and the graphics flow like water.  Sometimes I find myself putting  “3” on shuffle mode just so I can watch the cube automatically spin to the next album cover as one song ends and another begins.

If the cube is too much for you, the developer has also provided two other views which he calls “wall” (all the album thumbs laid out alphabetically in a flat view) and “boring” (a simple list view of artist and album).

One more added improvement to “3” over the stock music player (and to RockOn) is the widget it provides.  There are three different sizes that can be placed on your homescreen, all of which display the album artwork and have the full control bar that comes with the application itself!

Pros:      Great UI, with easy and intuitive navigation.  It has the basic controls you expect, comes loaded with an album art grabber, concert locator, multiple views, the ability to theme your album art, and a fully functional widget complete with album artwork. I encountered no force closes (promising considering the app is still in beta).

Cons:  Still lacks some basic features, such as the ability to repeat a whole album versus just one song.  Also, I wish that playlists were easier to create.

Bottom Line:  A solid app with a fresh approach to UI that makes navigating through large amounts of music a breeze. Paired with a great widget, this app is poised to be on your device for some time.  While small features do seem excluded from the current build, remember, the app is still in beta. If you find something missing, get your requests into the dev now! 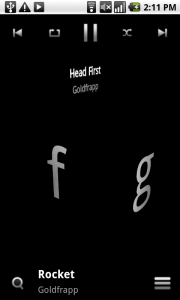 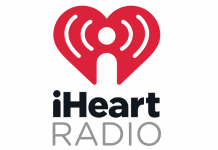