TUFFS has a fairly simple premise. Add custom shortcuts to your notification tray. You can add shortcuts, apps, contacts, and basically anything else that can be added to the home screen that’s not a widget. If you have an Android phone, then there is a very good chance that you’ll want to take a look at this app.

Aside from downloading and installing the app from the Google Play Store, there are quite a few things that you’ll need to do to get the app working.

First you’ll need to add your shortcuts to the tray and select your options. It’s a fairly simple ordeal. All you need to do is to open the app, select home, and then tap on the space that you want to use to save your shortcut. From there a window will open giving you the opportunity to select from an app or custom shortcut.

All other setup options are in the settings of the app. They will allow you to change the colors, shape of the icons, etc.

Once I figured out where all the settings were, I proceeded to customize the app to my liking. It was fairly easy, but it seemed like the app and shortcut selector took a while to load. This would not be a problem if it was only slow the first time it loaded, but it took a while to load every time I wanted to select a new shortcut. This made the process unnecesarily long.

Some of the non-app shortcuts I liked were the shortcuts to direct dial contacts, launch a particular playlist, and gravity box options. Of course, the shortcuts you can place within the tray will depend mainly on the apps that you have and the support that the developer gives for custom shortcuts.

Most of the features are included in the free version of the app, however, you will need to pay $0.99 to unlock all the features. One feature in particular that I think would be worth the money alone is the auto start on reboot option. The free version of the app has to be manually activated after every reboot. The only other paid feature that you can unlock, is a second row of shortcuts.

This is a really useful app that doesn’t require a floating launcher or anything else to be on your screen. Everything stays nice and hidden in the notification tray until you need it. I think that anyone looking for a faster way of launching certain apps or shortcuts will enjoy using TUFFS. People who don’t like having a clean notification drawer may want to pass.

What do you think? Are you going to give TUFFS a shot? Let us know in the comments below. 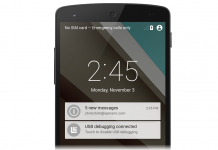