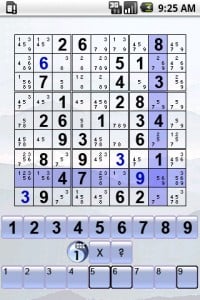 Astraware’s Sudoku for Android is an app for true “Sudokuphiles”. I say that not to imply that only a true Sudoku fan would agree with the $4.99 price tag it bears on Android Market, but because a true fan will appreciate the wealth of features and controllable settings built into the app which are not available, to the same extent, in most other Sudoku apps.

For those who don’t know what Sudoku is (or those who haven’t browsed through a newspaper in the past few years, or have managed to avoid the impulse item section in every supermarket, bookstore, and airport nationwide), Sudoku is a logic-based game in which you fill a 9×9 grid with numbers so that every row, column, and 3×3 sub-grid contain the numbers 1 through 9 without any repeating numbers in each respective section.

Astraware’s Sudoku includes your standard features such as pencil marks (smaller numbers appearing in the corners of each square for when you’re unsure or have narrowed down to a few possibilities) and the ability to undo or start over. However, where Astraware’s version really shines is in its ability to control every adjustable setting of the game, such as whether to allow, forbid, or flag incorrect entries, or choosing from six levels of difficulty. If you’re stuck, you can choose whether to reveal the answer to a random cell or to simply highlight an area on the grid which can be completed more easily. New to Astraware’s Suduko is an impressive “hold and highlight” feature which highlights all cells filled with a particular number of your choosing and all parts of the grid in which that number cannot be entered. 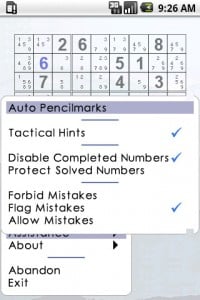 You can play from the pre-loaded puzzles or download new puzzles from Astraware’s daily updated server. Find a printed puzzle that has you stumped? Enter the numbers in a new puzzle and Astraware can offer hints and assistance to help solve it.

For $4.99, Astraware’s Sudoku may not be for everyone. A novice may, understandably, choose to try out one or some of the many free apps available on Android Market. However, few Sudoku apps offer the same amount and degree of settings, puzzle assistance, and control as Astraware’s Sudoku does.