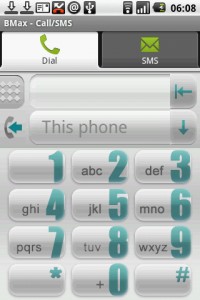 I’ve been playing with a VOIP app called BMAX over the last week and wanted to share my impressions.Â  As someone who makes next to zero VOIP calls, I was somewhat hesitant to try this out one at first.Â  I figured it to be your standard, vanilla client – something I might hold onto until the big Skype one comes along.Â  It turns out, this is unlike Skype altogether.Â  If you’re someone who does a lot of VOIP calling, then you need to check out iologue’s BMAX.

So how is it different from Skype?Â  That’s easy.Â  Skype is a service provider in and of itself.Â  BMAX aggregates over 2 dozen VOIP providers and gives you the best rate possible at that given moment.Â  Best rates that include FREE.Â  After a few days, I came away feeling like it was the Lending Tree of VOIP, making other companies compete for your business.

The app looks at the originating and destination phone numbers and chooses the lowest costs for you and sets the call up.Â  It should be noted that you will need to be set up with any/all of the providers.Â  BMAX only looks for those which you have accounts with. The set up process was quick and painless.Â  Considering how many different accounts one could conceivably have, I was pleasantly surprised at how streamlined it was.

Here’s a great way to look at how the app works.Â  Picture yourself back in the days of Lassie and wanting to make a call.Â  You pick up the phone and you’re greeted by the operator.Â  After you tell her who you want to be connected with, she patches you through.Â  In this case, BMAX plays the operator and they connect you based on which of your accounts is going to cost you the least.Â  Everything is done over EDGE, WiFi, or 3G (where available) so it doesn’t use the traditional cell network.Â  The few phone calls I made sounded clear and the people I spoke with were not able to detect any differences in my voice.

If you’d like to see what kind of rates you might run into, head over to the Rates Comparison tool. Plug in your source and destination countries and currency and get instant results four types of phone calls.

Here’s a video I found on iologue’s website showing how one goes about setting up BMAX on their phone.Â  The clip shows an iPhone emulator but the Android experience is very similar.

If you are looking to save on your VOIP calls, then I’d recommend BMAX.Â  You can grab the app out of the Android Market for $3.99 today.Â  If you’ve got the SlideME’s SAM client on your phone, you can get it there as well!

101androidapps.com
Note: Select outbound links may include affiliate tracking codes and AndroidGuys may receive compensation for purchases. Read our policy. As an Amazon Associate we earn from qualifying purchases.