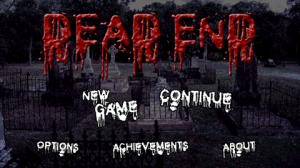 Dead End is a top-down defence shooter, where you take on hordes of zombies in a graveyard. There is a free version, but the paid one contains 20 different levels, 9 different zombie types, 20+ upgradable weapons and grenades, 90 achievements, 20 rewards, an endless mode, no ads and costs just $2.99. That’s a lot of bang for your buck, but is this zombie shoot ’em up as exciting as hosing down a wave of zombies with a mini-gun or jabbing at their rotting flesh with a rusty spoon? Carry on reading to find out.

Dead End has a several good points, and I’ll start with one of the best: the game has tonnes of stuff to be unlocked! The 90 achievements and 20 related rewards will greatly increase the life span of the game for those who love to get every single one. Now, I’m ashamed to admit I have no idea what many of these are, as at the time of writing I haven’t unlocked many achievements. As you kill zombies and complete waves and levels (25 waves per level) you earn money which can be used to buy ammo, replenish health, buy new weapons, upgrade your current weapons with things like faster reload time, higher capacity clips, or increased damage as well as other things. Those of you who will be trying to get all achievements will want to own every weapon and have them fully upgraded. As you can see, the content to be unlocked is extensive and all credit to the developer for knowing people want unlockables in their games to help extend its life.

Next is the attention to detail. Being a top down shooter the graphics were never going to be great, but it’s the little things I like. Like how if your bullet goes into one of the gravestone obstacles you see little bits of stone fly out. There are 9 different zombie types, each quite distinct from the others. For a top-down shooter, the detail in them is very good. Finally, the game is long; I played on easy mode for a good 4 hours or so and got to level 12 of 20. With medium, hard, extreme and endless modes there is enough there to keep you occupied in those thumb twiddling moments on the train for weeks to come.

I did run into one niggle with this game: the tilt-to-control system. Your character in the game stands at different points on the screen for different levels as waves of zombies come at you. To aim and fire, you first tilt your device back or forwards to aim your weapon, and then use two on-screen buttons, one to fire the left and the other to fire right. I found this awkward; tilting the phone sometimes caused me to have a restricted view of the screen and not being able to rotate the full 360 degrees before firing also annoyed me. This control system also made the game a lot more difficult. Not to fear though: the game also has a touch-to-fire control system, where you just tap on screen which direction you want to fire. I promptly changed to this method and never went back.

Overall, for the amount you pay, this is a very good game. Though there are a few issues with the tilt-to-control, it’s really no problem because of the option to just use touch-to-fire instead. The length of the game is great for some, but others may find it a little repetitive. But the number of weapons, achievements and rewards to unlock will keep hardcore gamers going. I suggest trying the free version first. It’s limited to 3 levels and has advertisements. But to be honest, $2.99 for the full version is a good price and worth paying.

If you’ve tried Dead End, let us know what you think of it in the comments section below. 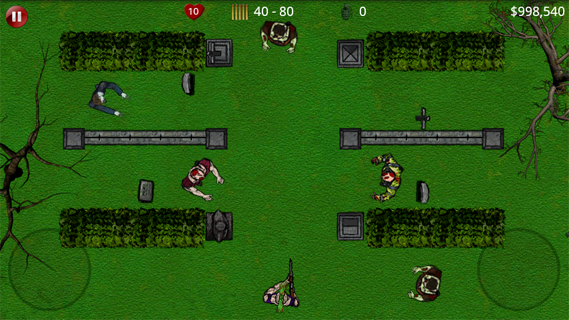 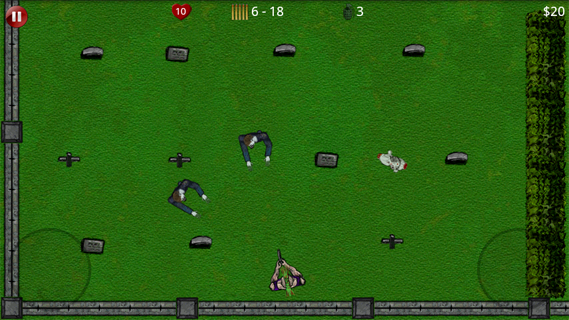