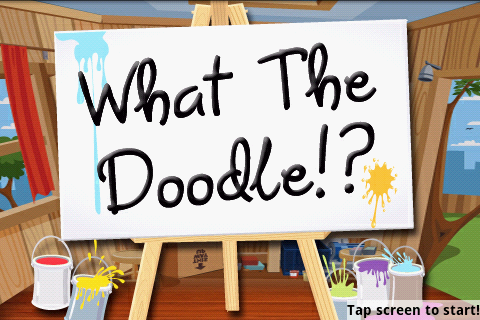 As some of you may already know, ‘What the Doodle?!’ was one of the overall winners of ADC2.Â  And it’s with good reason too. Simply defined, it’s an online multi player drawing game similar to Pictionary, except no board or dice required!

It consists of five players and ten rounds per game in a regular mode. Players get two rounds in which they draw a random phrase given to them and the rest of the players try to guess what that phrase is. The player whose turn it is to draw, of course can’t type, but has the aid of a ‘Close Guess! button which vibrates all other player’s phones and helps them out! This person gets points if another player guesses the phrase correctly, but loses points if nobody guesses before the time runs out (So use your ‘Close guesses’ with care!). 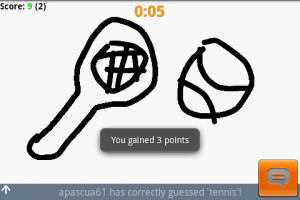 The player that guessed the phrase correctly also gets points and it’s another person’s turn to draw. The player with the most points by the end of all 10 rounds is declared the winner. At the end of each game the winner’s doodle is displayed (Each player gets to draw a small ‘Face Doodle’ to be displayed as kind of a contact card and to show off when he/she wins) along with the game’s final scoreboard.

The game is pretty complete, it’s extremely intuitive and has great menus and graphics. On top of that there are different levels and options: Easy, Medium, Hard, Team Medium, Team Hard and a Freestyle mode. Unfortunately, not many people actually play anything else but easy… I’ve tried it myself on medium and hard, but some things are a little TOO hard to draw. Of course depending on the person that might also add to the fun, but most people don’t seem to enjoy it as much. 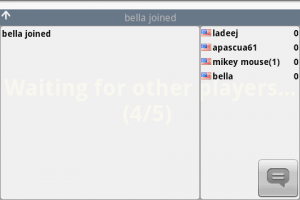 The games run smoothly assuming you have a good 3G connection (thank you Verizon) or a good WiFi connection. Other than that, you’re better off just not playing because you might get frustrated and break your phone like I almost did once with my G1. WTD has friend list support which allows users to invite other people they’ve befriended to join games that haven’t been filled/started yet. There’s also a chat box one can pull out from the bottom of the screen to use while waiting for a game to start as well as during a game. It proves useful at times when you miss the phrase or want to chat and add friends. As always with these kinds of things that give everyone the opportunity to be creative you can expect there are lots of users out there that are up to no good. Fortunately, there’s features to help prevent that. One can report users in game that draw profanity and there’s also a profanity filter option in the settings which blocks most bad words from the chat.

Now the weak points. There’s only a few of these and in the Dev’s defense these things are kind of unavoidable, but they’re worth talking about. For starters, it drains your battery if you’re on it too long which only makes sense because it’s constantly using data connections. It can also slow your phone down a bit, and rarely it will force close. The main issue is the keyboard. The game is more enjoyable with a slide out keyboard since one can guess away while still seeing the screen perfectly. However without it, one cannot see the drawing and type at the same time which is an obvious disadvantage. 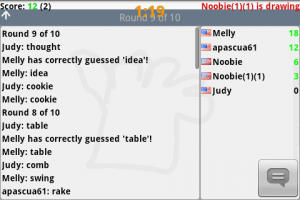 WTD is out on the Android Market right now for Â£1.00 as an early bird price, I suggest you go out and buy it NOW. There’s also a Lite version if people want to try it out before purchasing. The lite version only let’s you play on easy without the ability to make a custom Face Doodle. Still very much worth it. WTD is a winner from ADC2… what else do I have to say? Go out and get it! It’s a wonderful game that promises not to disappoint; it’s simple but well designed methods make this a game enjoyable for all.

This App Was Tested Using: T-Mobile G1 (Android 1.6)/ Motorola Droid (Android 2.0.1)
Presentation: The work of a professional, appropriate and pleasing to the eye. Colors, fonts, graphics and anything you can think of looks great. No sounds but they’re not really necessary, you can set it to vibrate on certain useful events. More than good enough.
Value: I’d be willing to pay more for it.
Stability/Resources: Very stable, it uses lots of resources but it does so effectively. Kills battery if you play too much. It’s designed to be used at home with WiFi.
Bottom Line: – A must have app that won’t disappoint. It promises tons of fun. Go out and get it is our advice to you.

Got the QR code from mplayit.com. Add them on Facebook! It’s a nice little marketÂ alternative.