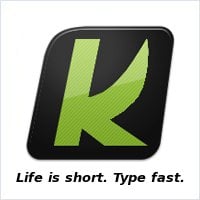 We all know there is no shortage of keyboards when it comes to Android. Some are good, while others…well, aren’t. One I have been trying out today is called Keypurr Keyboard, and I’m not exactly sure what to think of it just yet. It is more like the Blackberry Suretype that they use as the portrait soft keyboard on the Storm and the Pearl line. More information, pics, and press release after the break.

One thing about Android that really sets apart a lot of other phone OSs apart is the fact that with Android there is a bunch of options, and Keypurr is definitely a keyboard with options. When you first fire up the app, you are greeted by a screen, that like most keyboards is telling you what is so great about Keypurr. Then you either have the option of either pressing the back key and going back to the homescreen, or you can go in and start customizing Keypurr. One of the neat features that Keypurr has is it has 12 different programmable keys, and you can program each and every one of them from a list of six different options. It also includes cursor keys, so those of you with phones without a trackball or trackpad can easily move within the text that you are typing to be able to insert text where you want it to be.

Another interesting feature within Keypurr is that they allow you to be able to choose between two “different” layouts, one is almost information overload called, “all-in-one” and the other is called, “minimalistic”. You can also set if you want either a bright white keyboard or a darker more greyish black keyboard.

So far since I have been using it, I have yet to really have any problems with word prediction, for the most part it will predict what word you are trying to type, but there has been a couple times where I did have to select the word I was actually meaning to type. It is adaptive though, so it does learn your style throughout the time you are using it.

Now on for some of the things I really didn’t like about the keyboard, and why it probably will not be my daily driver. One thing I have noticed is that there is no good consistant way to access the alt keys. I have tried long pressing and shift+long press all to no avail. Another thing that I have found that I do not like is that it seems that the haptic feedback on the keyboard is not the best in to world, you have to have it on high to really feel it. That could also be my Nexus One that is showing signs of its age a little bit, but I have not noticed it while using the stock gingerbread keyboard.

Another thing is no multi-touch support. I know not all keyboards have this, but it really is a nice thing to have especially with most of the Android phones out there, it would really set this keyboard apart from the rest of the pack.

Even with the negatives, it is not a bad keyboard to use if you find yourself using only one hand most of the time to type. It has nice large keys that really do make it a breeze to use. I personally tend to prefer to use the stock gingerbread keyboard or the Swype beta. If you would like to give it a try though, Keypurr is free on the market until February 28th, after that all the trial keyboard will expire and you will have to pay the ~$4 it costs on the market.

TORONTO—JANUARY 25, 2011—Keypurr Keyboard 2.0 enhances an efficient and easy‐to‐use onscreen keyboard by adding a sought after new features and improvements, and preserving the features that have always made Keypurr unique.

• Voice‐to‐text: a feature that is becoming very popular among Android users.

• Stronger text correction: Keypurr 2.0 is better able to identify and correct spelling mistakes without sacrificing the accuracy of predictive text.

• All‐in‐one arrangement: Letters, numbers and symbols are all on one layout and accessible through one quick action. No extra taps or long‐presses.

• A comprehensive English dictionary that includes words not recognized by other software keyboards.

• Powerful text prediction: even though some keys have two letters, there is no need to differentiate. An intelligent prediction algorithm deciphers what’s being typed with remarkable accuracy

• User‐defined function keys for signatures, passwords, or anything users choose.

Keypurr Keyboard 2.0 is available as a free trial. All copies of the trial expire on February 28. Installing as soon as possible will allow users to best take advantage of the opportunity to try Keypurr for free.