We all know that games are scarce on Android, especially 3D games. iPhone users have boasted about 3D games via OpenGL 2.0 for quite a long time, but we’ve had MMS ;). Metal Gear Solid and Assassins Creed have graced the iPhone in 3D but not Android. The Assassins Creed for Android is disgraceful. But now we have Light Racer 3D. This is a 3D version of the popular game Light Racer made by the same developer. Light Racer 3D is pretty much the same as the original Light Racer, minus the 3D (of course).

The graphics are awesome compared to what most of us are used to seeing on Android; They really paid attention to detail when they designed this game. All the walls are covered in circuits that you can see really well, and the Light Cycles look like they jumped straight out of Tron. 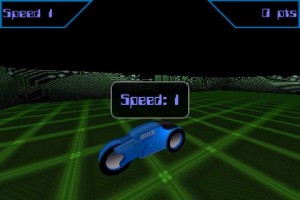 Game play is simple. The object of the game is to make your opponent crash into the light path that is left behind by each others light cycle. The controls areÂ  easy to learn as well – Tap the screen on either side of your character to make them turn left or right, or you can use the trackball. You can also tilt the phone left or right to get a side view of your light cycle. The game comes with a few different modes to choose from:

Most of the game modes, if not all, have power-ups in them, and some levels have 2 opponents as well. The power-ups are a nice touch but I hardly try to get them because I’m focused on not crashing into my own light wall!

This game does have it’s shortcomings though. It lags horribly when your phone does anything that uses your network.Â  Remember to kill any background processes that you can before playing.Â  There aren’t many customization options for the light cycle itself, and the maps are a little too small for my taste.

On the plus side though there are achievements that can be earned. An added feature is the multiplayer mode, which is very addictive! I gave this game 4 out of 5 (insert preferred unit of measure here) because itâ€™s a little buggy and needs some more features. If you would like to pick it up, it’ll run you $3.99 in the Android Market as of today.