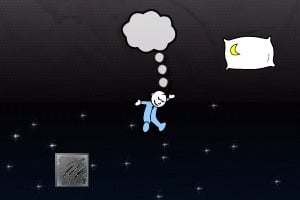 Lucid is a dreamy game with a simple concept and levels that are increasingly difficult to master.Â  First let’s talk about what Lucid is not.Â  It is not a racing game, jumping game, or any kind of first person shooter.Â  Your objective in Lucid is to assure that Baby Hermin gets a good night’s sleep.Â  You guide Hermin through the night by moving his dream cloud and avoiding obstacles that might disturb his sleep.

The graphics are fun and work well.Â  Gameplay is intentionally “dreamy.”Â  That is, the dream cloud is attached to Hermin by a few bubbles. Think of a thought bubble in a comic strip. The connection through the thought bubble gives the sense of controlling Hermin indirectly. You need to anticipate how he will follow.Â  You can have him follow slowly or whip him around an obstacle.Â  It is certainly fun to “get into a zone” and enjoy the “Zen of Lucid.” Your goal is to avoid obstacles and pick up prizes along the way.Â  There are 10 levels in the dreamscape.

My 10 year old niece saw my phone and we tried Lucid.Â  She was not successful and said, “Oh, I woke up Baby Hermin.”Â  Her game playing ability aside, she bought into the premise of the story.Â  Playing Lucid as a brief distraction for me and my toddler also works.Â  The scariest thing in Lucid is a ghost or maybe an alarm clock. (I highly recommend an app called Toddler Lock, too. Using the app, my phone is known as the Toddler Phone to my daughter.)

Lucid has an interesting backstory. The Lucid story begins with the IGDA’s (Independent Gameâ€¨Developer’s Association) First Global Game Jam. Â There were several â€¨locations all over the world where people gathered to make games in aâ€¨ 48 hour period (from Friday at 5pm to Sunday at 5pm). 6 students from NYU’s Interactive Telecommunication’s Program were on the original team.Â  They had never worked together before.

The initial idea of a boy who floated around in a dream holding a balloon morphed into a boy attached to a thought bubble floating through a dream.Â  The initial game was an applet done in Processing,Â  a Java-based graphics language.

Hermin was named by one of the play testers who saw how cute he was and just yelled out, â€œAwww, baby Herman!â€Â  A misspelling in the game instructions led to â€œHerminâ€ and the name stuck.

After positive feedback and many suggestions to create an iPhone app, the team reconvened. Since the original app was done in Processing, the busy team of students decided that an Android app written in Java made more sense for them.Â  The timing could not have been better.Â  In June 2009, the team heard about ADC2 and set August 31 as the deadline for Lucid’s release.

And it’s a good thing.Â  Lucid is currently in round 2 of the ADC2 in the Casual Gaming category.