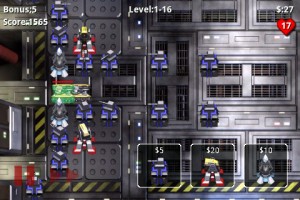 Whether its while you’re in line at the store, or sitting waiting for class to start, I am sure that many of you have your own go to game for wasting a few minutes of time here and there. Robo Defense by Lupis Labs is the one I’ve been playing with for a few weeks now on my MyTouch.

Upon first glance, Robo Defense is a simple tower defense game. The goal is to build turrets to massacre all of the little guys trying to get into your base before they can do so. For each one you kill, you are paid a certain amount of money with which you buy more turrets to kill more guys. The game is very simple to pick up and start playing, but it has, through the use of power ups and achievements you can unlock, a level of complexity that can keep you playing for weeks or longer without running out of things to do.

The game comes in both free and paid versions. The free one limits your upgrades and leaves you with only one map and 10 difficulties. The paid version costs only $2.99 and adds a few more static levels and some very interesting VR levels that are generated from a “Map Code” which allows for 40,000 unique levels. It also allows for unlimited upgrades and level difficulties. The developers seem to be keeping a steady stream of updates coming too. Recent updates have added a boss fight and new tower types which are only for those that pony up for the paid version.

Game play is very simple and intuitive. The game is very responsive and doesn’t lag out too bad, which is nice considering the graphics are phenomenal–they’re much better than most of what I’ve seen on Android thus far. It also has a very nice auto-save and load feature that allows you to stop playing quickly and still be able to pick up right where you left off.

You can buy Robo Defense in the Android Market for $2.99 or pick up the FREE version which offers 1 map and 11 difficulty levels.Â  For added convenience, you can scan the 2D barcode below!