Lasting Impression: Full of useful information, SciencePal is essential for any scientist, student, or enthusiast.Â  The nature of its data means users will be referencing this for years to come.

Nitty Gritty: SciencePal is a quick reference for scientific data.Â  It is simple, useful, and exactly what it needs to be.Â  Originally released as a free app called Elements, it started as a Periodic Table reference.Â  Since then the app has expanded and now consists of four sections: Periodic Table, Constants, Polyatomic Ions, and Solar System. 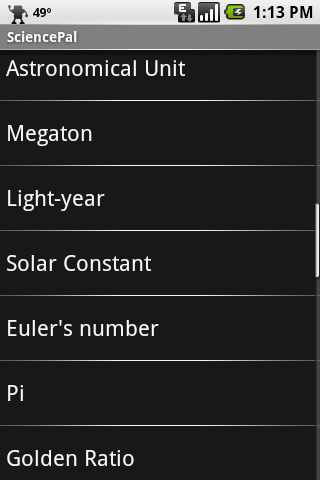 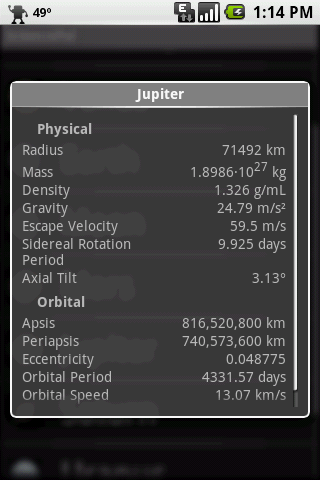 It is easy to see that a scientist designed this app and that is a complement.Â  The UI presents data in a clear, concise, and easy to navigate manner.Â  There is no need for fancy animations or complex menu systems.Â  Simple pop-ups display data and allow for scrolling which works well with the amount of data displayed.

Periodic Table is self described.Â  It follows the standard layout using colors to denote type categories.Â  Selecting an element will display a pop-up with detailed information that suits both well trained scientists and beginning students.Â  The option to zoom in/out makes it easier to select elements and is a smart design.

Constants is a list of universal constants and their values.Â  The list consists of the English description while the pop-up displays the commonly used symbol along with the numerical value in the standard unit.Â  Menu choices allow the user to customize which types of constants are listed by choosing categories like Chemistry, Astronomy, or several others.Â  This is particularly helpful if you are mainly concerned with one area of study and those other constants are taking up precious screen space.

Polyatomic Ions is a list of the names and chemical formula of polyatomic ions.

Solar System displays a list of all scientifically recognized planets inside our solar system, plus the Moon and Sun.Â  Selecting displays data for both physical characteristics, such as Radius, and orbital characteristics, such as Orbital Period.Â  Solar System is a great part of the application right now.Â  However, it is also the part with the most potential for expansion.Â  Further information about satellites (moons) of each planet as well as their characteristics would be useful.Â  Also, a graphical representation of the solar system that allows zooming and panning, like the Periodic Table, would make this section the best of the entire app.

All data is stored locally which means you will never have to wait on a data connection.

Overall, SciencePal is one of the best apps for Android.Â  Teeming with information, it fulfills its role in the app ecosystem perfectly, giving exactly what its users want.Â  Well worth the $0.99 cost already, I look forward to future updates that provide expanded functionality and information.