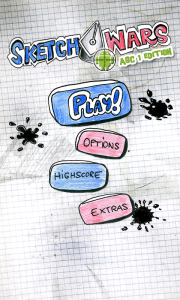 A long time ago, in an Android galaxy far, far away, the land of the white notepad was under siege. The fountain pen tip, the land’s only hope, fought valiantly to escape from the grasp of various unrelenting enemies.

Do not be deceived by the game’s title or my clichéd introductory sentence. This game shares nothing in common with George Lucas’ Star Wars saga. Rather, SketchWars is a tribute to arcade games of old that incorporates modern technology through its use of your phone’s built-in accelerometer and touch screen. The game is played on a white notepad, which serves as the battlefield, and enemies attack you from all sides.

SketchWars features beautiful hand-drawn graphics that add to both the nostalgia and the appeal of the game. The player uses their accelerometer to navigate and touch screen to fire their gun. When you shoot an enemy, a comic book-esque animation flashes on the screen. When you kill an enemy, they drop small blue balls that act as multipliers, and occasionally a small heart that grants a player an extra life.

As rewarding as it is to vanquish an enemy and collect the multipliers they drop, you need to finish them before they truly die. After an enemy is shot, they leave behind either an ink blot or a pencil scribble mark. In the upper right-hand corner of your screen is a band aid and an eraser. If an enemy leaves behind an ink blot, you drag the band aid over said ink blot to eliminate the enemy. If they leave behind a pencil scribble mark, you need to grab the eraser and physically erase the enemy from the screen.

SketchWars is available in both free and paid versions, the latter of which will run you a meager €0.99 (about $1.25). Both versions take advantage of Froyo’s install to SD feature, however the paid version grants you access to achievements, multiple difficulty levels and does not contain distracting advertisements. SketchWars is a carefully planned and beautifully designed game that charming visuals and has plenty of replay value. Try out the free version today or purchase the paid version as a part of the AndroidGuys Paid App Pledge.