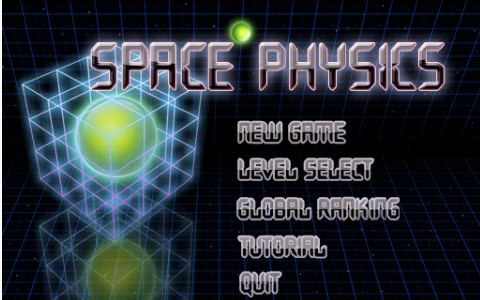 If you thought engineering and physics (in their most basic forms) couldn’t be turned in to a fun puzzle game then you are sorely mistaken! Space Physics gives you a marble, a goal and obstacles in between and asks you to devise and draw a way to get the ball to its destination.

If there’s a movable block in the way, you can draw a small circle on a stationary block to create a gear, draw a line to represent a lever and then draw a weight to move the lever in the necessary direction to get that block out of the way. If there is a line of columns you need to get the ball across without letting it drop in between, just draw two circles close to each other and a line joining them, and your invention will chug along like an old banger of a car – carrying your ball across safely towards the star-shaped goal.

These are just two examples of the clever design that results from the game’s creator’s imagination in combination with your own. There seems to be infinite solutions to each of the eighty levels in the game, limited only by what your brain can think up.

The visuals are simple but stylish and the number of levels on offer will keep you busy for quite a while. Although the possible solutions are endless, unfortunately the components are not – understandably only a set list of devices and shapes are recognised from your finger-drawing. Gears, levers, weights, circles and vehicles are all you’ll need, although you may have to contain your desire to conjure up other useful tools.

The only other major negative I have come across in Space Physics is that from time to time it may not recognize the shapes you draw. Most commonly in my experience, trying to draw a large curve between opposite sides of the screen (as a ramp, for example) can end up creating a huge circle which would be far too large to use as it is almost as large as the level itself. This is a rare experience though and other than that the game seems to be pretty much bug free. From time to time there is the temptation to cheat by drawing straight line on top of straight line to push the ball up to the level you require but that is down to your own conscience to resist…! 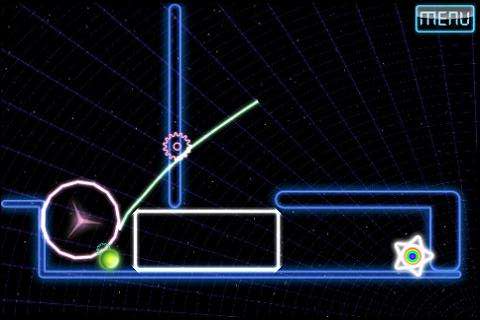 This App Was Tested Using: Nexus One running stock Android 2.1-update1 and HTC Hero running MCR2.9.
Presentation: Basic graphics boosted by stylised effects and colouring. Few sounds other than the crunch of moving gears and chugging ‘vehicles’.
Value: A ‘lite’ version is available giving you the first ten levels to try for free. The full eighty-level version is $2.99 which won’t suit everybody but if you enjoy the lite version it is a worthwhile investment to support the developer.
Stability/Resources: Completely stable but gameplay is rarely affected by very minor bugs. Small install, light on resources.
Bottom Line: A fun game that somehow manages to be complex in theory, simple in practice, yet still challenging as a puzzler.