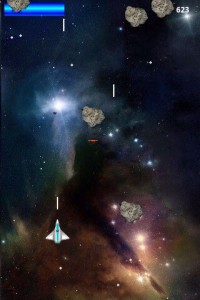 I have been watching this game since it was first available on the market, so I’ve seen the many improvements that have been made to it. At first this game was way too hard to beat. After only a few user comments, the developer started taking action. At one point he was releasing a new update every other day, adding features such as:

Now that the facts are out of the way. Here’s my pros & cons.

I’ve really enjoyed playing this game. I think the graphics are very nice and polished and the soundtracks compliment game play. I wish that the game was a little easier though, but that might defeat the point. It’s not that big of a memory hog for those who are limited on space. I’m looking forward to see what Thye Chean releases next. So if you want an action game that’s entertaining and will challenge even the best gamers, check out Space War.