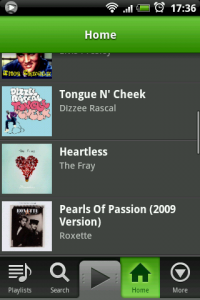 For those of you that haven’t heard of Spotify, the name is most commonly recognized as referring to a desktop music player/streaming service for Windows and Mac giving you access to a near-unlimited supply of music in exchange for putting up with visual and audio advertisements. An unobtrusive advert banner will show up in the media player and then you will hear a twenty second audio ad after every six tracks. If you want to get rid of these advertisements you can sign up for Spotify Premium (Â£9.99/month in the UK) to banish them and also increase the quality of your streamed music from 160kb/s to 320kb/s.

Right, now that the introduction of the desktop version is out of the way, I’d like to jump right in and tell you the two biggest reasons why you might not want to use Spotify mobile on your Android device. First of all, Spotify, in both mobile and desktop forms, is only available in the following regions: the UK, France, Spain, Sweden, Norway and Finland. That’s it – nowhere outside of Europe at this time. This is due, as is often the case with music services, to needing to come to agreements with labels and licensing groups in each individual market.

Secondly, Spotify Mobile, on all platforms (it’s currently also available for iPhone, with S60 version coming soon), requires a Spotify Premium subscription. Yes that’s right – a tenner a month fee (in the UK). This has been quite the bone of contention in the app’s comments on the Android Market as people download an app listed as free (which it is – the Market doesn’t charge you to download the app) only to find they have to sign up for a Â£9.99/month subscription to actually use it.

It might seem strange to put two big negative points at the beginning of an app review. but I feel it is necessary before I can begin to discuss the application itself on its own merits without having to drop the two bombs above at the end of the article.

The app itself has a straightforward and clean user interface giving you access to a rich library of music. As Spotify considers their service as a whole (including desktop versions) to be in beta, this is quite impressive – this app appears much more polished than the other “beta” apps on the Market–and also more so than many of the full releases.

Upon opening Spotify you are provided with your collection of playlists automatically synced from your desktop Spotify app. (presuming you have used Spotify on the desktop before). From there you can click a playlist to view its contents and set a track playing, or long press a playlist to show options to rename or delete it. Your playlists are synchronized between the mobile and desktop versions at all times.

At the bottom of the display are five large icons; â€œPlaylistsâ€ to return you to the aforementioned main view of playlists, â€œSearchâ€, a “Play” button, â€œHomeâ€ and â€œMore.â€

â€œHomeâ€ takes you to a disappointingly small â€œwhat’s hot on Spotifyâ€-type list of sixteen tracks/albums that are new or popular on the service. Because the list is so small and seems to stay almost identical for a week or so at a time, I really believe a lot more could be done with this. A larger list with an element of randomization would cause me to check it far more often to get ideas of new tunes I’d like to listen to. Turning it into a recommendation engine based on the artists and genres in the playlists you already have saved would improve it even further.

â€œMoreâ€ at the bottom-right of the main screen is a link to the â€œSettingsâ€ and â€œAboutâ€ pages where you can turn features such as WiFi and 3G sync on or off, or check the amount of SD card space being taken up by your music (which might seem strange for a streaming service but more on that later!).

The â€œPlayâ€ icon at the bottom center of the screen is actually an pull-up tab (similar to that of the Android app-drawer on your home screen) which brings up the currently playing track and artist, a large image of the relevant artwork/cover and the play/pause and next controls you would expect from any media player. There is also an information â€œiâ€ button to show additional controls such as: â€œRepeat,â€ â€œShuffle,â€ and â€œAdd to Playlist,â€ as well as “more from this artist” and “more from this album.” This â€œNow Playingâ€-drawer can then be slid back down so that you can carry on discovering other music from where you left off, whilst the current track plays out.

Spotify on your Android device will also allow you to store up to 3,333 tracks in an offline cache. This means you can pick playlists whilst you have a WiFi connection and have Spotify save the tracks to your SD card, enabling you to still listen to your music if you are out of 3G/WiFi reception areas, such as on the tube, or if you don’t want to waste your monthly 3G data allowance.

The way it works is this: On the main playlist menu there is an â€œOffline playlistsâ€ button at the top. Once ticked, that playlist will be downloaded over WiFi at the next opportunity (3G download can be enabled in settings but would defeat the point for most users). Once you have ticked all the playlists you want available offline, just press the â€œDoneâ€ button. That’s it. Simple, straightforward and very useful.

This one feature makes Spotify Mobile far more interesting than a (streaming-only) direct equivalent of the desktop app would be. The question is whether this makes the service worth Â£9.99 a month to you. Personally, I decided to give it a go for a month or two and see if I got enough use out of it to justify the subscription cost.

I’ve found that since signing up for Spotify Premium, I’ve actually started to listen to more music as when I hear any tunes on the radio or from a friend or see music advertised. All it takes is a few presses on the mobile app and it’s there ready for me to listen to either on my next train journey, or on the desktop Spotify application when I get home. It has also encouraged me to use the desktop app more often due to the fact there are no more audio adverts in between tracks.Â  The convenience and expansive library make up for the cost for me.

I do think it would be in Spotify’s interest to release a subscription-free version of this app that did not allow you to store playlists offline and still included the audio ads like the desktop version. That way, people would be able to give the service a try and see whether it works for them, before shelling out the monthly fee. This, together with making Spotify available in more markets (which is planned, according to their FAQ), would give the service a lot more exposure and thereby providing them with more customers than they have at the moment.

All in all, I believe Spotify Mobile for Android is a high-quality, polished app together with a useful, near-indispensable service; it just depends whether you think it’s worth the subscription fee. At least with Android, unlike the iPhone version, you can continue to listen to your music whilst surfing the web or reading the SMS that just arrived–thank Google for true multitasking!