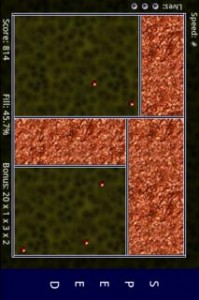 Ok call me crazy, but up until now I really haven’t used my phone for gaming purposes. Â Perhaps it’s just that I haven’t been in any situations that have called for something to simply occupy my time. Â All that changed on Friday when I was stuck waiting for a friend in a very public place with little to do. Â I jumped into the Android Market and perused through the new applications available. Â When nothing piqued my interest I thought to myself, “Why not?” and I went into some unknown territory… the games section.

What a wellspring of awesomeness! Â I was soon downloading games like a madman: Amazed, Abduction, Colorix, Bonsai Blast, etc. Â There is one game, however, that has managed to consume a great deal of my time as of late. Â It’s called Trap! I can’t explain why it is so addictive, but whenever I start playing, I have a hard time putting it down.

The premise is simple. Â Lay claim to as much screen area as possible by trapping moving balls, any area that gets walled off without a ball in it contributes to area you have collected. Â Sounds easy right? Â Wrong, the trick is that you have to draw a complete line without a ball running into it before it is finished being drawn. Â With balls colliding and bouncing all over the screen it quickly turns a simple game into one of complex strategy. Â Once you have taken control of 75% of the screen area, you progress onto the next board. Â To further increase the fun, there are power-ups such as a freeze mechanism that stop the balls from moving for a few seconds or speed boosts that allow you to draw a line quicker than usual. Â Other welcome features of the game are bonuses awarded for accomplishing various things such as: capturing the greatest amount of screen area in one move, or creating the smallest area for a ball to bounce around in (my current obsession!).

If you are an old-school gamer like me, chances are you grew up playing games like Pac Man and Galaga, where Â the only real objective of the game is to earn the high score. Â Well the same thing applies in Trap!Â  It’s all about pwning your friends score and beating his/her record for fastest board clearing, or most points earned for % of board captured over 80%.

Visually the game is not off the charts in terms of coolness, but it serves its purpose.Â  What more do you need? You start out with a big empty box with balls bouncing around in it.Â  There is also a display that will show you the calculated amount of overall space you have captured (this is important for strategy when trying to earn bonuses), your current amount of lives left, the amount of speed boosts you have, and your overall score.

One thing that I think really turned me on to the game are the controls used for play. Â Seems kind of a no-brainer for a touchscreen game and I can’t believe nobody else had thought of it earlier. Â To play you simply swipe your finger on the screen and a line begins to draw. At times it is a little frustrating if the screen misreads what you input and draws a line you didn’t intend (lost more than once this way!). Yet, Â it is a marriage between simple game control and complex game possibilities that make Trap! such an enjoyable game to play. Â I think if you go and download Trap!, it will be one of those rare games that stays on your phone for some time.

Currently the game is in version 1.0 and I hope the developer continues to upgrade because I think there are a lot of cool places he could take the game. Â I would like to see a multiplayer mode, or an on-line mode in which two people could play the same grid, at the same time, and battle against one another.

Trap! was developed by Matt Wachowski and is available for download on the Android Market today for free. Â Check it out and let us know what you think.