Lasting Impression: Useful is an understatement. Packed with shortcuts to common phone and network settings, this app is right at home on the desktop screen.Â  Each release builds upon the last.

The Nitty Gritty: We initially downloaded an early version of this app, back when it only offered GPS and WiFi toggling. Even then, we were impressed with how easy it was to turn those functions on and off. Thinking we’d be toggling WiFi often we put the shortcut on our desktop for quick on/off access. It has stayed there since. 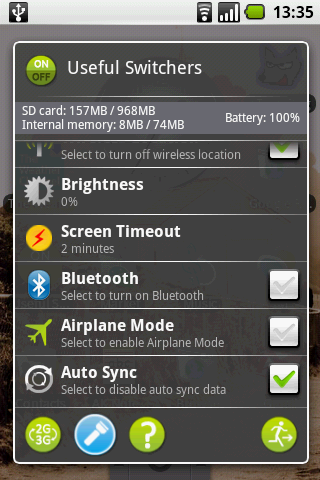 The latest version of the app we played with (v0.7) has added an immense amount of features. Users now have the ability to manage GPS, brightness, airplane mode and more at the touch of their finger. There’s also a shortcut to ringer modes, Bluetooth, and screen timeout. If you travel in and out of 3G markets with T-Mobile, you’ll be pleased to know that you can manage those network settings as well.

Even though this app doesn’t really give you anything you can’t get elsewhere within Android, it’s extremely convenient to have all of these tools in one place. This app has never given us a Force Close notification and responds very quickly. Since there is really nothing to install at 180kb, this ought to be a no-brainer for G1 owners.

Oh, and there’s a flashlight too!

According to an email we received from the developer, future versions will have foreign language support.Â  As of now, there is already an update coming with German, Russian, Ukrainian, and Swedish translations.Â  Also on tap are settings for profiles and the ability to hide and display features.Â  Check out a few more screenshots at Maxim’s website.