Never thought I’d write this, but coloring books are all the rage nowadays. Particularly 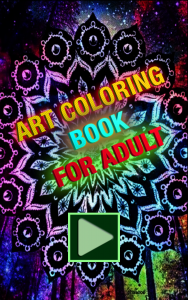 for adults, the allure of sitting down and quietly & simply filling in intricate drawings with a myriad of colored pencils is at an all-time high. No goal or objectives to hit, this form of informal art therapy is ringing true with thousands if not millions of over-worked, over-stressed adults.

Now developer BLONDEA has come out with an Android app, Art Coloring Book for Adults, that looks to capture the charm and peace that comes with this increasingly popular pastime.

App setup is pretty simple: download the title from the Play Store. From there you just open and off you go. Upon opening, you are greeted with a simple title screen, where your only option is to press a large “play” button. Once doing so, you are greeted with the main screen where you pick your template to color.

While in this ‘template’ screen, you can pick from a large number of template categories. 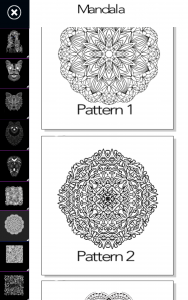 Each of these categories has 5 different templates within to choose from, with the exception of Animals, which has 3 separate categories for a total of 15 templates. 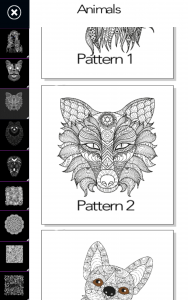 Once you click on a template you are taken to the drawing screen. Here again the features are pretty spartan. Along the top you have a home button in the center (which takes you back to the templates if you want to pick a new one), and a couple of other buttons which I’ll cover shortly.

Along the bottom you have your palette; a line of colored pencil icons of varying base colors. Once you tap on one, a sub-menu of 11 hues of that color appear, allowing you to pick just the one that suits you. Then you simply tap on the open spaces in our template to begin filling it in. 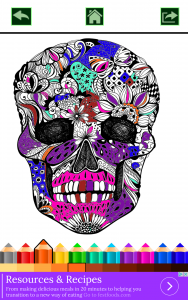 The overall experienced was mixed to disappointing for me, for several reasons. The first is that you don’t fully “color” like you would on paper. Instead you just tap each white space and the color fills in automatically. This takes away from the ‘focus’ feeling you can get with a more traditional pencil & paper (or with other apps that let you manually fill the colors in). It makes it rather easy to reduce the satisfaction of the app, I tended to start “mailing it in”.

Secondly, these templates (as you may already know) can be quite intricate, and using this tablet on an 8″ tablet still rendered exact placing of color a pretty tedious task. A user would be well-advised to bring a stylus if they are really serious in completing a template to their true satisfaction.
Also, after using this app on a tablet-sized screen, I can’t imagine even trying on a phone….though I’m sure there’s some common sense in that thought somewhere. :)

Overall the app is slow in response to touch, swiping, and tapping. It feels like you are dragging the app along. This alone can get a little frustrating. If it was more responsive I would be willing to give it some more time on my device.

For audio- well, there isn’t any. Really. Just a coloring surface for you to get lost in. I 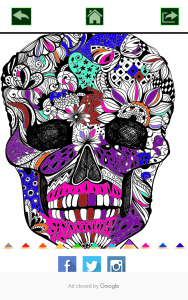 take this as a good thing; I believe some kind of background music would just be distracting. The developer got this right; there are far too many “relaxing” apps that put such focus on intrusive zen-style background music.

While I appreciate the idea of Art Coloring Book for Adults, the execution leaves a little wanting. If the responsiveness could be increased, it would go a long way to improving the experience.

Also, a notice to the user to bring a stylus to this party would also prevent possible frustrations, though again most users should likely expect that to be an almost-necessity.

If you’d like to give it a try yourself, download Art Coloring Book for Adults from the Play Store here. 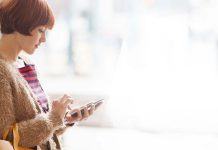 You can now find your art lookalike with Google 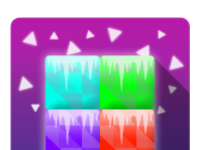 Recolor: A pretty hobby at an expensive price (Review)