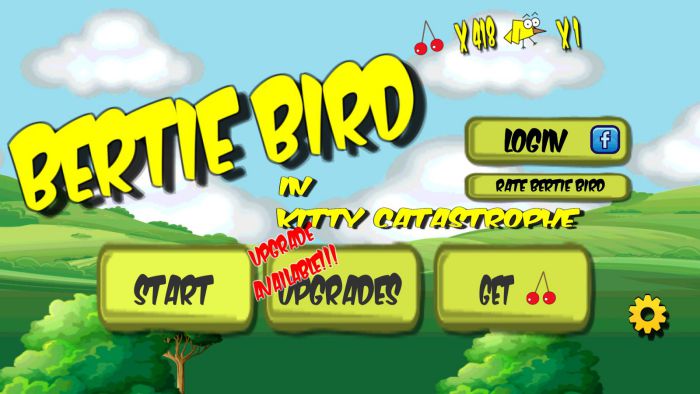 There are plenty of Flappy Bird copy cats out there, ever since the release of the addicting tapping game. There are even more spin-offs of the game, which take on the basic concept of Flappy Bird and try to do something new and different with it. Few games have been met with the popularity that consumed the game, but that doesn’t mean people aren’t still trying.

In order to get up and running with Bertie, there’s not too much set up that’s involved. After you first install the game, you will be asked to log in to Google Play Games so that you can compete against the other Bertie’s around the world. Other than that, you hit Play, and get to flapping. There is also a quick splash screen that tells you to “Tap to Flap” and has arrows pointing up and down. These arrows are there to let you know that you have to stay in sight, or the games over.

That brings us to Bertie Bird. The basic concept of Bertie Bird is to continue tapping the screen moving your way throughout the level, but there’s a couple of twists added to Bertie Bird. While you’re trying to keep Bertie airborne, there are cherries that you need to collect. It would be too easy to just try to collect as many cherries as you can in one level.

This is where the second hazard comes into play for Bertie. You must avoid cats flying airplanes and bouncing on really high pogo-sticks, while flying across the country-side. There are some planes that occupy various lanes that Bertie will need to avoid. However, there are also other planes that fly downwards across a section that are trying to knock Bertie out of the sky.

Once you’ve been knocked out of the sky by the cats, you are greeted with a screen that shows you the distance you went, as well as the number of cherries that were collected. One more observation to make note of in regards to this screen, is that those cherries are converted into “Poo’s”. The poo’s are basically your score for each game, or the distance. However, there are also combo’s that can be gained by collecting cherries consecutively, so try and flap your way to the top of the leaderboard.

Speaking of leaderboards, recently the folks behind Bertie Bird added Google Leaderboard compatibility, so you can compete with other players around the world. There are also some achievements that you can reach throughout your travels with Bertie Bird.

All in all, Bertie Bird is pretty close to the same level as Flappy Bird was. Mainly because of the added obstacles that the developers have placed in Bertie’s way. If you’re interested in trying out Bertie Bird for yourself, check out the Play Store widget below, and grab it for free. There is a paid version for $0.99 which is mainly just to support the developers, with no real changes to the game. If you’ve already played Bertie Bird before, drop us a comment with your top score.