There are all kinds of weapons-based games in the Play Store: gun games, vehicle combat (airplane, tank, etc), archery, and the like. The South Korean developer Karakod Interactive wants to take us back even a few more millennia, back to the days of our cave-dwelling ancestors, with a game called Big Hunter. It puts us in the position of a caveman (caveperson?) whose job it is to harvest dinner. Big dinner. Like, really big dinner. With nothing but a set of spears to chuck at said big dinner. Let’s see how this goes.

Setup is easy, just download from the Play Store and open it up.

Gameplay is simple; almost too simple. You are set on the screen with a rather large game 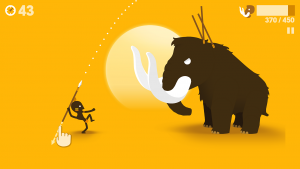 animal on the other side of the screen as you; could be an elk mammoth, or other, sillier creations. Right before starting, you’re shown the ‘soft spot’ of the animal in question; the area to aim for with your spear to make a fatal strike.
When I say “almost too simple” above, it’s because that’s all you do: you aim and throw your spears Angry-Birds-style at the animal…after taking a couple of shots, or after a short period of idleness by you, the animal will begin to charge you and take you out first. You can also backpedal by tapping on a corner of your screen. But it quickly boils down to you wildly flinging spears trying to kill before the wicked tusks/antlers/beak/other hit you and take you out in the process. 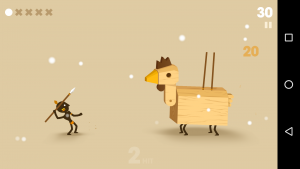 There is a “training camp” section, where you can practice or spar with fake game animals, scoring as many points as you can before missing a total of 5 times. Once you feel confident enough, you’re free to go out into the wild to harvest your dinner. As you progress you are afforded the opportunity to upgrade your weaponry, from premium spears, to axes, and so forth.

But the game can go from too-simple to almost too-difficult, as well. The aforementioned 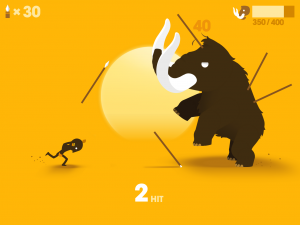 soft spot can be quite discrete….that is to say, small. It can quite difficult to hit this spot, and this can get quite aggravating. Both my son & I tried repeatedly to get through the middle stages of the game, without any success; we kept getting run over repeatedly without progress.
As a hunter, you start out on ‘Day 1’ and have to complete one kill per day. Maybe we are just pretty terrible with this game, but it sure seemed like the way to win a level was always elusive…we couldn’t get past ‘Day 8′ for the longest time, and every level after that was a struggle.

This is one of my favorite parts of this game. The graphics and animations are really good, with a clean 3D look. Some animals are dark and monochromatic, while some of the practice animals are more silly, appearing wooden in a realistic way, within hinged necks and such, carried by your fellow tribesman,and don’t come across as threatening at all. Your hunter avatar is more or less a featureless silhouette, with a bright white eyes.
The background is generally a solid color; a rather soothing sunset-yellow, with a large yellow setting sun in the background. 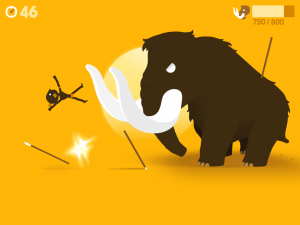 Sound is pretty good, though it can get tiresome. The background music is as-expected African percussion, though it can swing to the Disney-side of things. Sound effects in general are very muted, as the music takes and holds prominence.

Overall I like Big Hunter. As a former hunter and avid outdoorsman myself, I actually found it kind of fun using a spear to harvest large prey in a gaming format. It’s likely not the most politically-correct game available, and I can see many gamers and parents declining to even download this title. But those who do may find some quality game time in the unique context of hunting for your own dinner.

What is the big.LITTLE chip configuration?