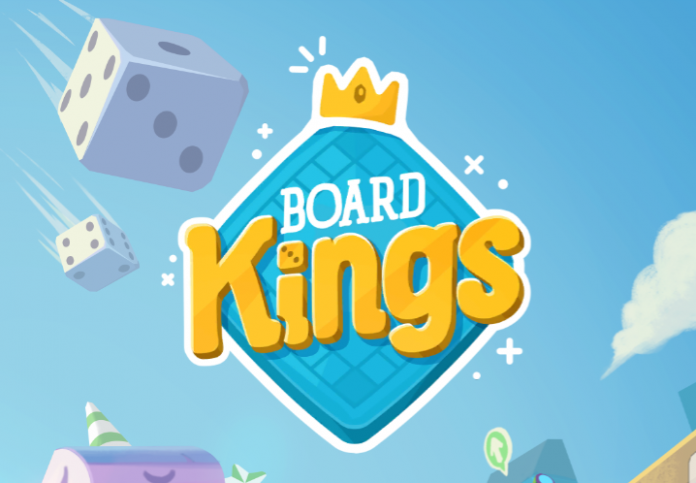 Everyone loves board games! Okay, okay. That’s a very broad and generalizing statement. MOST people like at least some board games. There’s something fun about seeing what twists and turns will happen and maybe the best part of all is getting one over on your friends. Jelly Button Games took this magic formula and mashed it up with a town building mobile game format to make Board Kings. So grab your dice, chose your game piece, and let’s see if this game is worth passing Go.

Since this is a board game, and they are usually played with others, you initially get the option to connect to Google Play Games and to Facebook. You can always add these later and they are not necessary to play, but I will say that it is much more fun to play with people you know than just randoms. You are given the choice of 4 common game pieces to play as before you get dropped on the start space and are given the chance to roll the dice. The game has a nice tutorial that runs while you play for first few turns and guides you through all the different types of spaces you can land on and is quite thorough while not being overly complicated. Then you are on your own and are free to start building your town or terrorizing your friends.

Controls for this game are pretty easy. There is a dice button on the bottom of the screen, and as long as you have rolls left (this games equivalent of energy) you can move around the board the number of spaces that you rolled. Buildings are marked by a green upgrade arrow then they are ready to be upgraded, so simple taps around the board are all that it takes to be in control of your town.

Your game board is filled with a variety of spaces, from chance card spots that give you some unique bonuses, to a vending machine that gives out new game pieces. There are cop cars to scatter about, a piggy bank to store money in, and even a steal space to steal money from other players. There are lots of things to do on your board alone, but what’s really fun is traveling to other players boards and breaking their stuff or taking over ownership of their buildings, netting your cash and bonuses all while trying to dodge their police. A big part of this all happens by chance, however.

Board Kings is a little bit of strategy and a lotta bit of luck. You roll the dice, then move that number of spaces. For every space you move, you get some cash which is awesome, but you have to move what you rolled. Most actions on your board can only be performed when on certain spaces, so since you can’t choose to stop on a particular space, you may find yourself really wanting to stop by the vending machine or the steal space to get a hefty sum of money, only to find yourself coming up short or overshooting. I have found that every time that I jump on and use all of my 35 rolls, the max number you can have banked at any one time) that I will usually end up hitting every space on my board at least once, but it will take several trips around and nothing is guaranteed.

I personally love that there is a bit of chance to it, much like playing Monopoly or Life where I’m not guaranteed to get the property I want to hit the celebrity status I dreamed of, but I know it can be frustrating to not be able to get rid of someone’s ownership of your building because you just can’t seem to land on that one space. This is what keeps the game interesting because you never know what you’re going to land on.

The cartoony board aesthetics are full of life and fun to look at. From Main Street (your starting board) with all of its city sights and sounds, to Carrot of the Caribbean with its beachy pirate theme, each world looks unique and offers visuals that suck you in. Each board also has 10 different unlockable themed game pieces you can purchase from blind boxes in the vending machine (with a free purchase each time you land there, so IAPs are NOT necessary).

The boards all play the same despite having unique looks, but this means that you will never have a board that everyone is picking because it has less for people to steal from or is more difficult to navigate. Personally, I would have liked to see a little variety in this so that it’s not just the same diamond board for every person I visited. The pirate theme could have been rounded or wavy as you hop along the shore. It’s a small personal gripe and in no way takes away from the game at all.

This game has a lot going on. There are loads of upgrades for every building on your board. There are over 6 themes to collect with ten game pieces each, plus after collecting multiples of the same piece they unlock silver and gold pieces. The real fun, in my opinion, comes from taking the train to a friend’s town and wrecking buildings, capturing businesses and raiding their piggy banks. This can lead to rivalries and a battle for land, but it’s also way more lucrative and if you’re a competitive person watching as your face is plastered on top of one of your friend’s buildings is an opportunity you can’t pass up.

Board Kings is everything people love about board games in a town building, mobile game setting. You build your town, you destroy your friend’s town, and you collect items all while rolling a dice and hoping you get a six so you can finally get that last upgrade to get to the next level. There’s a bit of luck involved, since this is a board game with dice, but with a relatively large energy pool, you’ll have enough turns to make it everywhere and get done what you want to get done. The game is great fun on it’s own with random other players, but the real fun comes from playing with friends and being able to take over their town and lock them up in your jail. If you’re looking for a bite-sized game to play with your friends, this is definetly one to not pass up.