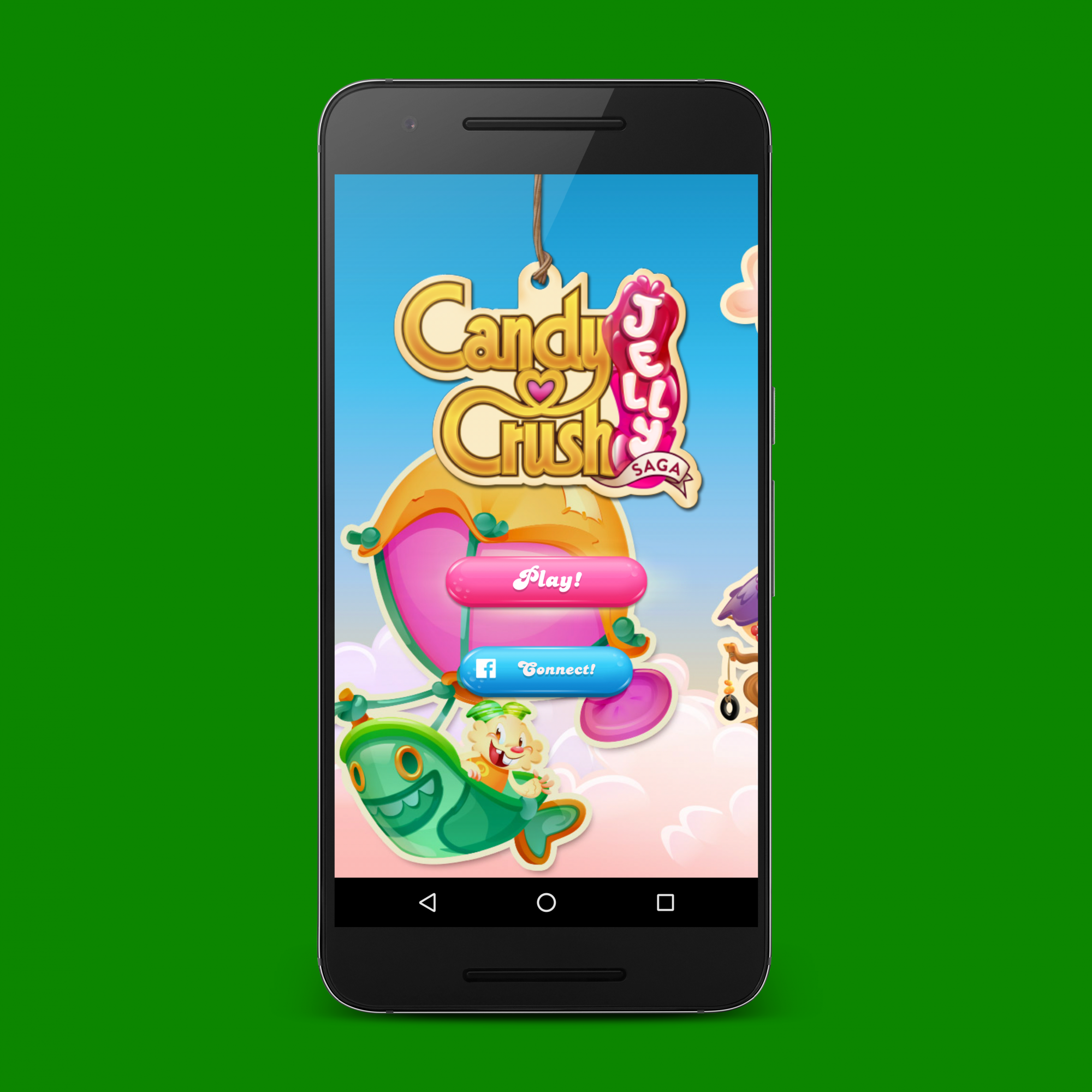 There’s a very high chance that you know someone who plays Candy Crush. The game stormed the App Store and Google Play when it came out, and even after several years, it has a loyal userbase around the world. King, however, has not rested on its laurels and has launched several other games to maintain its momentum. Candy Crush Jelly Saga is a spinoff of the game that made them so successful. While the gameplay remains untouched, several elements have been added to differentiate it from its other games and competitors.

There’s no setup needed at all. For those wondering, Candy Crush Jelly Saga doesn’t offer a way of linking your Google Play Games account, since (as you may have realized by now) King highly encourages you to connect the game to Facebook. The main screen shows only two buttons: Play and Connect (with a Facebook logo on it). Connecting the game to Facebook is not mandatory at all, but there are a couple of features locked behind it (which will be detailed later).

For those of you who haven’t played previous Candy Crush games, it’s a puzzle game very similar to Bejeweled. The main goal is extremely simple: match three or more candies of the same type to make them disappear from the board, and continue doing so until you complete a certain task. Each game starts by telling you the mission to achieve, so you can plan your strategy accordingly. Just as previous Candy Crush games, you have to progress through sequential levels, which the game calls Story Mode. However, this game introduces you to a new element in the Candy Crush franchise, called “Jelly” (that’s the Jelly in Candy Crush Jelly Saga). This new component is easily identifiable because of its purple hue, in contrast to the normal blue board.

Through the first levels, after doing nothing for several seconds, the game will feel your desperation and automatically suggest a move. This is a great way of guiding newcomers through their first experience and make things easier for them. Also, through loading screens, the game explains what combos you can make in order to get special candies. Candy Crush Jelly Saga never shows you a proper tutorial, but makes a good job of explaining what you have to do through other means.

The game starts off easy by asking you to “spread the jelly.” This means that the whole board has to be covered in this weird purple substance. How do you do it? Mix candies that are covered by jelly with candies that aren’t, and the jelly will spread through all blocks involved.

The catch is that the game gives you a certain amount of turns to do it. It would be way too easy otherwise, wouldn’t it? Spend up your turns and you’ll lose a life. Lose all five lives available and you won’t be able to play, unless someone sends you lives through Facebook. If you prefer to not annoy your friends with requests (the internet community thanks you, by the way), you can buy lives using gold bars (read: money). Also, the game replenishes your lives automatically, but this can take several hours. It’s a smart system to bring new users, which has proven very beneficial for King, but it’s very annoying for everyone else involved.

When matching candies in a different way, you’ll sometimes get newer elements on the board. For example, match four candies of the same type and a striped candy will appear. Using it in another combo will clear a whole row or column. Matching five candies will yield a Color Bomb, which you can mix with another candy and it will destroy all candies of the same color. There are several kinds of special candies, which add depth to the gameplay and could be the difference between clearing and failing a level.

Further levels add another level of difficulty by introducing the Jelly Queen, which is your in-game enemy. In duels with her, you have to remove her jelly from the board to win. Not only do you have to worry about your attempts of filling the board with jelly, but also you have to keep an eye on the queen’s movements, or you could end up with way too much of her jelly on the board to clear. Making combos will stun her and give you another turn. It’s a fantastic way of spicing things up and adding another layer of strategy to the gameplay.

However, this same mechanic can definitely become problematic, since the computer-controlled queen has a lot of luck and can chain combos very easily. This could hamper your hopes of progressing quickly through the levels and has the potential of becoming frustrating.

There are other missions too, such as one that involves exposing creatures that are locked behind barriers. To break them, you follow the same principle as when spreading jelly: connecting candies with barriers behind them will cause these barriers to break. These creatures are constantly moving behind these barriers, so you have to either expose them quickly or block their paths by breaking contiguous layers.

King has decided to not include third-party ads in the game. Instead, it advertises their other games. Doing so won’t give you more lives or anything, in case you wanted to download the whole King’s portfolio to pass that pesky level you’ve been stuck on for five days. There are also in-app purchases, which yield gold bars. They are used to buy more moves (trust me, you’ll definitely need this), more lives, and lollipops to smash specific blocks. They range from $1.10 for 10 bars to a whopping $44.59 for 510 bars, which obviously is advertised as having the “Best Value.”

Graphics, as usual in the Candy Crush franchise, focus on being colorful and flashy. Special effects when matching three or more candies are all glittery, jelly looks as sticky and viscous as it should be, and candy is bright and vibrant. All interface elements, such as the HUD, alerts, and buttons, have subtle elements to closely follow the “Jelly” theme, which makes for a cohesive experience. Scrolling through the Story Mode levels is beautiful, with changing scenarios and elements floating in and out.

Candy Crush Jelly Saga is one of those games you can play without sound, but crank up the volume and you’ll be rewarded. The sound effects when making combos and using different elements, such as Jelly Fishes, exploding candy, or spreading jelly through the board, are very cool and really add to the experience. One aspect that could be improved is the music. It’s not that it’s bad, but it’s nothing to write home about. At least some tunes are catchy, and, even after listening to them for several hours, they don’t annoy you.

As you can see, Candy Crush Jelly Saga offers a lot of depth, variants, and scenarios to keep users engaged. However, the same old tactics of making users poke other people for lives continue to plague the game, and, judging by the number of games King has put out, the trick is here to stay. This can be exacerbated by the levels involving the Jelly Queen, which can chain combos and destroy your hopes with ease, leaving you a game you can’t play until the counter has reached zero. However, if you are patient or if you have friends that like to be annoyed, then Candy Crush Jelly Saga is a fun, addictive game that stays true to the formula that has made the franchise so successful.