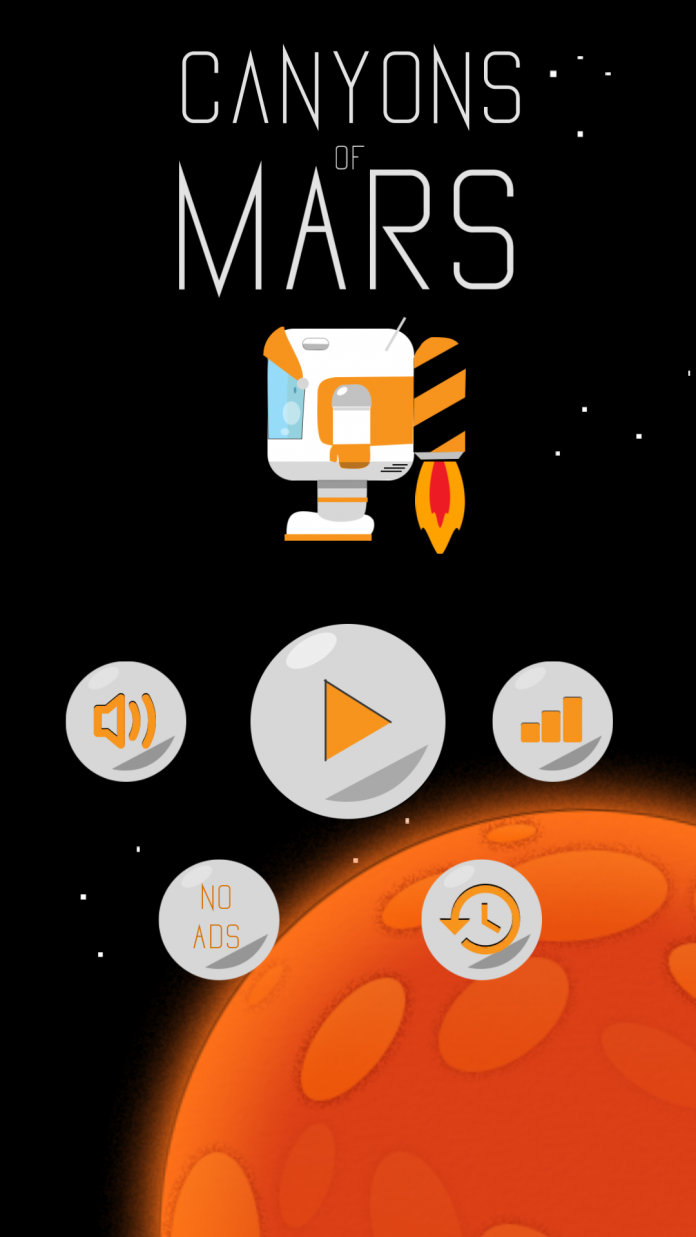 This is going to be a rather quick and simple review, as the game being reviewed is also pretty simple and quick-playing. Canyons of Mars is a simple side-to-side arcade game, and is intended for quick pickup-and-play.
It’s a family-friendly (easy and safe for the kiddos) title with a clean design. It comes to us from developer South Pacific Apps (makers of “Fill the Pot”, also reviewed here on our site).

Simple enough; just download from the Play Store, and enter the game. Upon entry to the title screen you can jump right into gameplay, adjust audio settings, see the game’s record scores, and choose to pay up to the premium (no-ads) version. 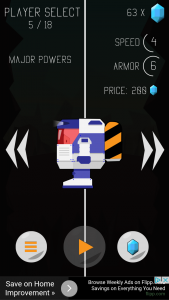 Going into gameplay, your next screen is to choose your “martian” or avatar. You’re forced to start with the weakest martian for your first levels, until you collect enough blue jewels to but your next martian (for example, then next better martian costs 100 jewels). So you grab your martian, hit ‘play’, and you are transferred into gameplay.

The game is extremely easy to play. You have only 2 controls to worry about, tap/hold the left side of the screen to move left, and tap/hold right to move right. 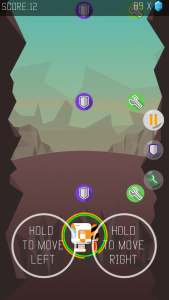 Your objective is to move left and right, simultaneously collecting jewels and assorted power-ups, and avoiding falling Mars rocks. The jewels you want to get a more capable martian for your next level (see above); the power-ups will help you last longer on your current level.
The power-ups are of three varieties: 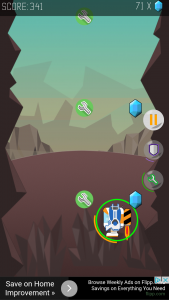 That’s really all there is to it. With these tools and skills, your goal is to survive each level, upgrade your martian, and conquer the next level.

As stated above, Canyons of Mars is a family-friendly game, and would be of particular interest for younger kiddos like preschoolers and kindergardeners. The options are limited enough so as not confuse a player. Meanwhile, the graphics are clean and bold (attractive to younger eyes) and the sound effects are a pleasant combination of cartoon background music along with Nickelodeon-esque sound effects. 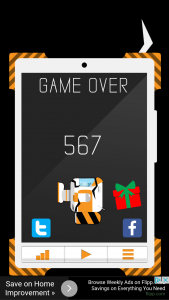 As a reviewer my main complaint is with how punishing the game is when it comes to getting hit with a rock you’re trying to avoid. In a lot of games you’re given a lot of chances to continue play (you can take a lot of bullets, or you can get injured otherwise quite a bit before dying and therefore ending your turn).
In Canyons of Mars, there is very little pity given to you as a player. If you happen to have your armor & shield really built up, you may be able to sustain contact with two or maybe three rocks. But the rest of the time (which is a majority of gameplay in my opinion), upon contact with a single rock, you are dead, your turn is over, and you are directed to re-start the level.

This in my opinion is very punitive, and is a deterrent to its replay value. It could get a bit frustrating when you get pretty far on a level (including collecting quite a few power-ups in the process) only to have it all end because a single rock hits you. It was a bit of a turn-off, to be honest.

In all, Canyons of Mars is a pretty decent game, as long as you know what you’re getting into. A MMO simulation is is not, but it’s not trying to pretend to be, either. The game is probably best played by younger device users, or other simpler minds in your house (Like my brothers. Hi guys!).

Download Canyons of Mars from the Play Store here.