The mobile game market tends to have emphasis placed on opposing ends of the spectrum.  On one end you have the very (and sometimes extremely!) grand, detailed, and complex works of artistic and scientific wonder. These games are constantly out developing each other with their intricate world designs, control schemes, and processor-eating technical requirements.

On the opposite end you have a very different expectation. These are games where simplicity rules, and both ease-of-play and addictiveness by design can quickly decide the success of a title. There are plenty of options at both ends.

One such option on the simpler end of things is the title “Clocks”, by the Saskatchewan, Canada-based studio Noodlecake Games. They first hit the mobile game market with their possibly familiar “Stickman Golf” and “Super Stickman Golf” games. 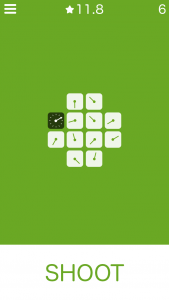 You can grab the game for free from the Play Store, and startup is as easy as pressing the app icon on your device.
The game does connect with your Google Play Games account, though I’ve never personally used that so I cannot speak to it’s worth here. 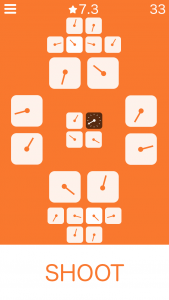 The idea of “Clocks” is simple enough. There are two modes, ‘Quest’ and ‘Survival’, though you are forced to start with ‘Quest’.  In this mode, in each level you are presented with a different arrangement of clock faces, each with a single hand spinning either clockwise or…you guessed it.

Each clock’s hand is also spinning at a different speed. The only control is a large ‘shoot’ button taking up the bottom of the display; about the size of the Android screen dock on a typical home screen.  At the beginning of each level, one clock is highlighted as the one you are in control of. 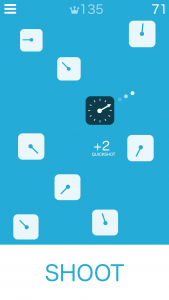 The idea is to press the ‘shoot’ button as the spinning hand lines up with another clock of your choice. This action shoots a small dot, or BB, at the clock you’re aiming at. If you hit it, the previous clock disappears and you are now in control of the clock you just hit; ready to shoot the next one of your choosing. You repeat this until you have cleared all of the clocks off the screen, when you are congratulated on-screen and taken to the next level. If you miss, a quick “oh darn”-type message pops up; you’re given the option to try again and again until you complete it. There are two levels of victory in each stage: you receive a *star* if you complete the stage before the stage’s countdown timer gets to zero, or simply a ‘passable’ score, with the option to move to the next stage or retry for the star.

Once you clear the 10th level, a message displays that you have unlocked access to the ‘Survival’ option of the game. This is an untimed version of the game. You begin with a similar screen of randomly placed spinning clocks, one highlighted as the one in your control, ready to stop and shoot upon your button press.

The difference here is when you accurately shoot a clock and take it over, the old one disappears and a new one randomly appears guaranteeing you never run out of clocks to shoot. The object here is not to clear the screen, but to see how many clocks you can accurately hit before finally missing, which becomes your high score. Successive attempts at this game option are solely to break your record and get a new personal high score.

Overall I do enjoy this game; the design is simple, but colorful and with good visual contrast, so it’s easy on the eyes when staring at a 5” screen. The gameplay is a matter of simple timing, which makes personal investment a minimum. You can pick it up and put it back down equally easily, which is nice in a typical hectic day. Sometimes you just want to challenge yourself, or while away the minutes in the doctor’s waiting room on something not called Facebook.