There are literally dozens of alarm/clock apps available in the Play Store. Most of these focus on user interface, attempting to woo you with a unique approach look & feel, time setting, alarm setting, and alarm management. And most of these same options also give you some level of flexibility with what you wake up to, in terms of ringtones or upload-able music clips.

There is another app in the Play Store that gives you all this, but also strives to bring you a lot more depth to the actual alarm portion of your experience. It’s called Clockwise Lite, from the developer Epoch Software. It’s an app that’s usable for all ages, and (mostly) works on all devices….more on that in a bit. Let’s explore this alarm app to see what it can offer….

Setup is fairly easy: just download from the Play Store and you’re in. Once you’ve opened the Clockwise app, you are taken on a screen-by-screen tour of the available features. A main one of which is called “Modules”. These are voice-based audible (a typical Google-esque synthesized female voice) form factors that make up your actual alarm (on top of your selected music or ringtone, of course).

You can choose to have these read to you either sequential to the initial music/ringtone, or played over the top, with the music as background. 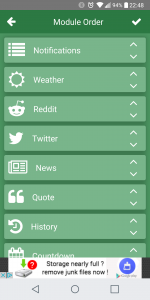 Additionally, you can set the modules in the order that you’d like to hear them. Want news first? Sure thing. How about the fun fact of the day? Yep, no problem (my favorite: “The earth’s spider population could eat the earth’s human population in under 1 year.” Neat!).

When the alarm does go off, and if you don’t have the toggle set to have the voice play over the music, then you will get an icon in your notification bar. This gives you a manual start button to begin playback of the voice-based alarm audio. Not sure if this is nice to have or kind of weird; I presumed, being the apparent key feature to the app, that the voice functions would be more automatic. It’s probably just me, but I’d be curious to see if this is a deal-breaker for the user that simply doesn’t want to touch their phone first thing in the morning.

It should be re-stated that this is the “Lite” version of the Clockwise app. This means a max of 4 modules available at any given time, and of course ads. The paid ($.99) version gives you unlimited modules to utilize and clears out all ads. 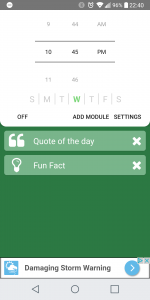 I found the setup interface to be usable, but it could be better. Setting the time was fairly simple, but for some reason I couldn’t find the way to actually turn the alarm on. Turns out it was hiding in plain sight; the small ‘OFF’ text on the left side of the screen is actually a toggle switch….press to switch to ‘ON’. I’d like to think I’m not a total dummy for not getting this right away.

On this setup screen you can also plainly see the modules you have activated for your next alarm. There are buttons for quickly selecting additional modules, as well as the general app settings.

Clockwise settings include setting your ringtone/music, snooze time, module order (see above screenshot), upgrading to the ‘pro’ version, and the voice settings. This includes altering the synthesized speech rate and pitch, to something that pleases you.

If there is an item of concern for me, it was of app steadiness. I was working this app on 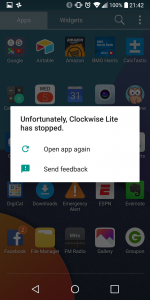 my *new* LG G6, and I experienced repeated occurrences of the app crashing. No idea what was causing this, though I do have my theory.
I also have an Alcatel Idol phone that I ran this app on, and experienced no trouble whatsoever.

The big difference? The G6 is running 7.0 Nougat, while the Idol is 6.0.1 Marshmallow. So my guess is that the app has yet to be completely vetted with Nougat….but again that’s just my theory.

Overall I like the idea of Clockwise Lite. The idea of getting your news, weather, and other information read to you as an alarm function while you’re still waking up is a pretty slick idea. The execution in the app has a bit of polish left to acquire to make it a must-download, but I would still urge you to give it a try and see if it is a viable option to rise you from your slumber.

Clockwise is looking to add Fitbit, smartwatch and speech recognition into the app for a more inclusive and immersive user experience. Look out for these upcoming enhancements. 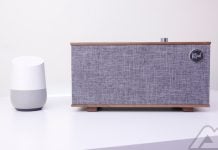