“Defy Media” and YouTube’s “Smosh” together have proven the growing influence and practical applications of YouTube and online communities with their newest app “Food Battle: The Game.” The Smosh duo, Ian and Anthony each make appearances in the game, along with many of the characters and hosts from the smosh universe.

In the game, you play as Anthony, who’s mission is to save the world from the mutated junk food that is attacking. This crazy concept, along with the zany characters that make the smosh channel so charming are present all over this game. While fans of the smosh channel will certainly get a kick out of the game, the gameplay and style are certain to please most android gamers.

The hack and slash style gameplay in Food Battle is executed well, and when paired with the colorful cartoonish art style and smooth gameplay, it makes for a very pleasurable visual experience. The controls however, are one of the weak points in the game. In order to move around, you have to place your finger on the area you’d like to go, which forces your hand to block a part of the screen. This is is especially frustrating during combat, because it seems as though  it was designed to be fast-paced. 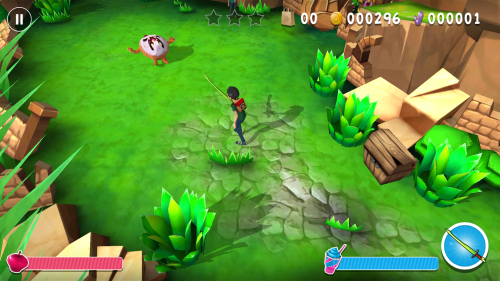 The game is free to play, and does not require in-app purchases to complete, though they are available. The purchases are not forced upon you, however they do give anyone who buys them a huge advantage. Crystals, for example, are used to buy almost anything in the game including: new ingredients for weapons, new clothes or even a new life if you die, but once you run out it’s very hard to find them, unless they’re bought. The prices are very steep, with the cheapest purchase in the game being about $5, which is more than most people pay for full games on the android platform.

All things considered, Food Battle is a very well made game, that deserves its current 4+ star rating in the play store. What do you think of the game? Let us know in the comments down below!