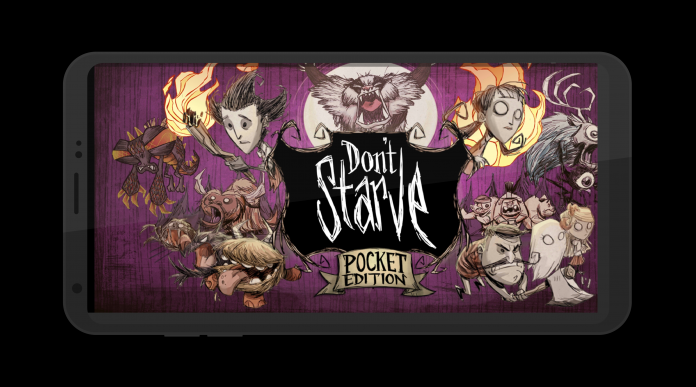 In Don’t Starve you’re dropped into a world of dangers; use your wits and ingenuity to craft tools to help you survive – no matter what you do though, the end will always be the same.Death is inevitable. My first two days in Don’t Starve were no different; here’s about how they went: 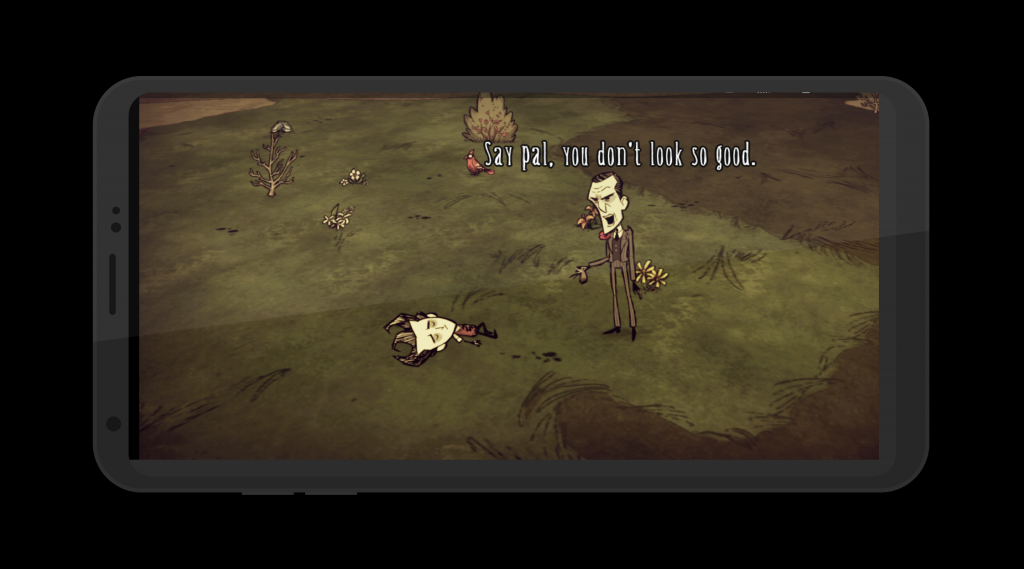 “Say pal, you don’t look so good. You’d better find something to eat before night comes.” That’s the only thing the gaunt, sharply-dressed man said to me. I lay on the ground, dazed, as he vanished into a crack in front of my very eyes. Climbing unsteadily to my feet, I looked around at the lightly-wooded grassland. It was specked with tufts of grass, tiny saplings, and wildlife ranging from butterflies to birds to rabbits.

Without the benefit of guidance from a higher power (or even a helpful omnipotent narrator) I began to collect things that might be useful. The branches of the saplings broke away easily enough, and one of the many rocks strewn about turned out to be flint – bound to the branches using some of the aforementioned grass, it created a sort of crude axe. My first tool. 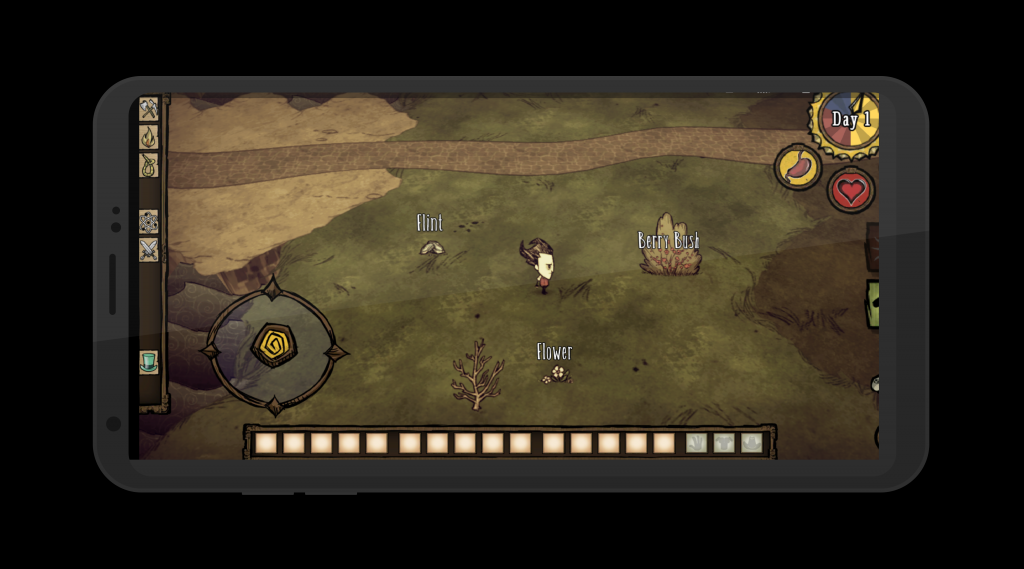 As the sun descended lower in the evening sky, the gaunt man’s advice grew more poignant – my stomach grumbled. Foraging for berries and wild carrots remedied my hunger for the moment, but as the night crept ever closer, I knew I would need a fire to chase away the shadows – and whatever might lurk in them. 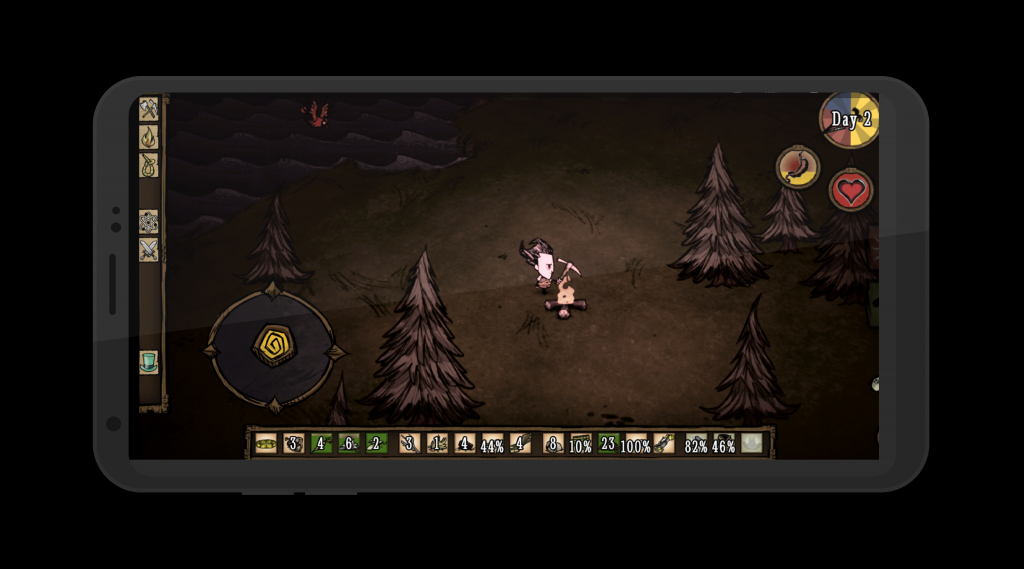 I gathered enough wood and grass to form a campfire, then fed it logs from nearby trees to keep the flames high. In the darkness, I heard things moving around – I fed another log to the fire.

I rose with the dawn, determined after a fitful night’s sleep to get something done to better my circumstances. I made a pickaxe out of more flint and twigs – it would be useful for chipping away at the many boulders in the area. And with that, I had an idea. I would need to build better tools – and a shelter – if I was going to survive in this strange place. So I set out, determined to find enough components to build what I’d need. A road, spied through the trees, led to the North and South – I chose North.

The road passed by a series of headstones – a small, makeshift graveyard, likely full of the people that came before me. Between the graves, a small glimmer – no, two – caught my eye. Wary of ghosts but more curious, I stepped into the graveyard and plucked the shiny objects from the gravedirt. Gold! Two gold nuggets, just sitting there in a graveyard! Confused but not one to complain about good fortune, I pocketed the nuggets and continued down the road, hoping to find some civilization. 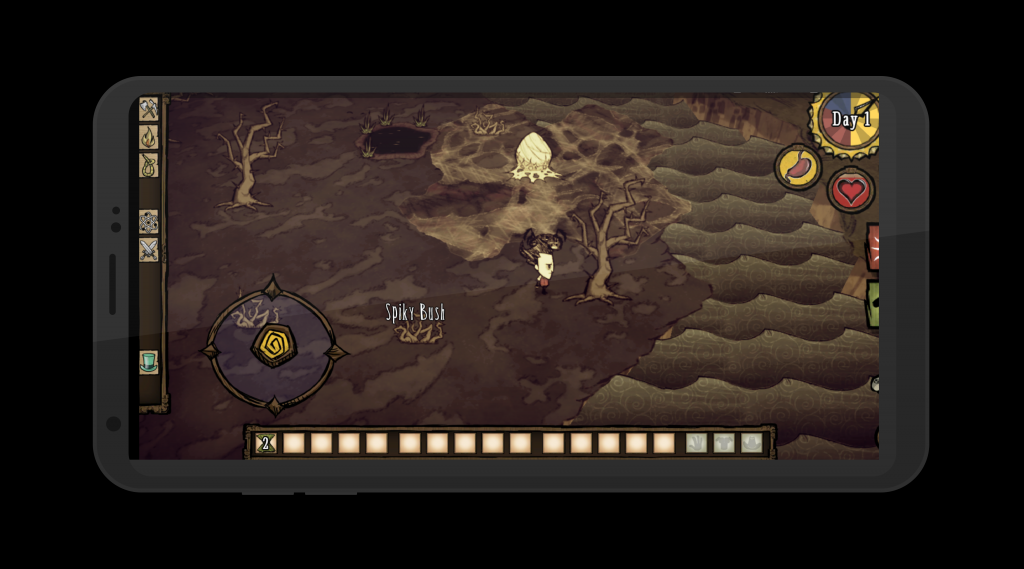 Instead of a town, coming around the bend in the road I found the trees lined with thick strands of spider silk, forming massive webs. Giant egg sacs pulsated from within the webs, and to my horror hatchlings the size of my head extricated themselves from the silk before my eyes. With an inhuman screech, they skittered toward me on eight gooey legs.

In a panic, I swung my primitive axe repeatedly, striking the spiders over and over until they lay dead, carapaces shattered into a dozen and more pieces. The egg sacs pulsated wildly, almost as if they sensed the demise of their brood. I crushed them into mush, and the road was quiet once more. Thinking, perhaps that some of the remains might be useful, I gathered the silk and spider meat and carried on.

Having found what I needed to build my crafting station, I found a small copse of trees and set about clearing the area. Here I built the station, tucking away the remaining lumber for safe keeping, and began my research. Thoroughly inspired by the result, I began to explore other ideas – armor made from bundles of the grass that grew so plentifully around my camp, a chest made of lumber to store my components, a wall to keep unwanted creatures away. 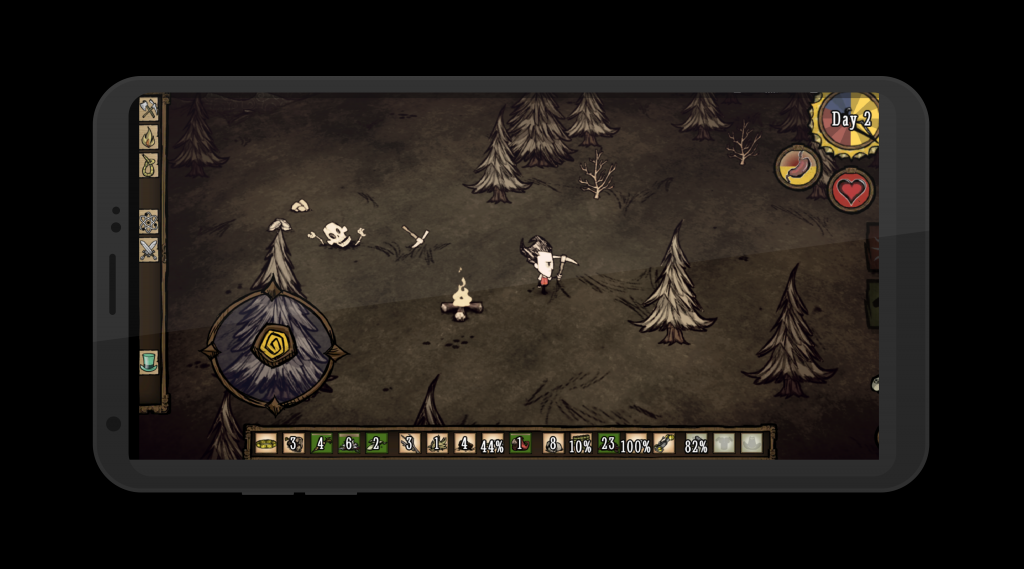 So lost was I in my inventing fervor that I barely noticed when the sun drooped over the horizon. I turned to my stockpile of components and reached for the grass I needed to kindle my campfire, only to find I had used the last of it to make my armor.

And as the last sliver of daylight vanishes behind the horizon, I listen to the beings in the dark growing ever closer. They are coming for me.

Don’t Starve is a survival-crafting game from KLEI Entertainment. In it, the goal is to stay alive as long as humanly possible, taking into account Hunger, Sanity and Health as you brave the unknown wilderness in which you wake up. Along the way you will research and build new tools and equipment to help you survive.

The graphics in the game are top-notch. Beautiful, hand-drawn graphics with a 2D feel, but in a 3D world. It’s a unique style that really leaves an impression. It’s very Tim Burton-y in a way, calling back to Nightmare Before Christmas in its design. There were a couple graphical glitches on my LG V30, though, with the game’s UI not scaling properly and leaving a couple of the buttons bleeding off the screen with no way to fix it without manually changing the resolution of my phone – which, luckily, is an option in the V30’s menus. 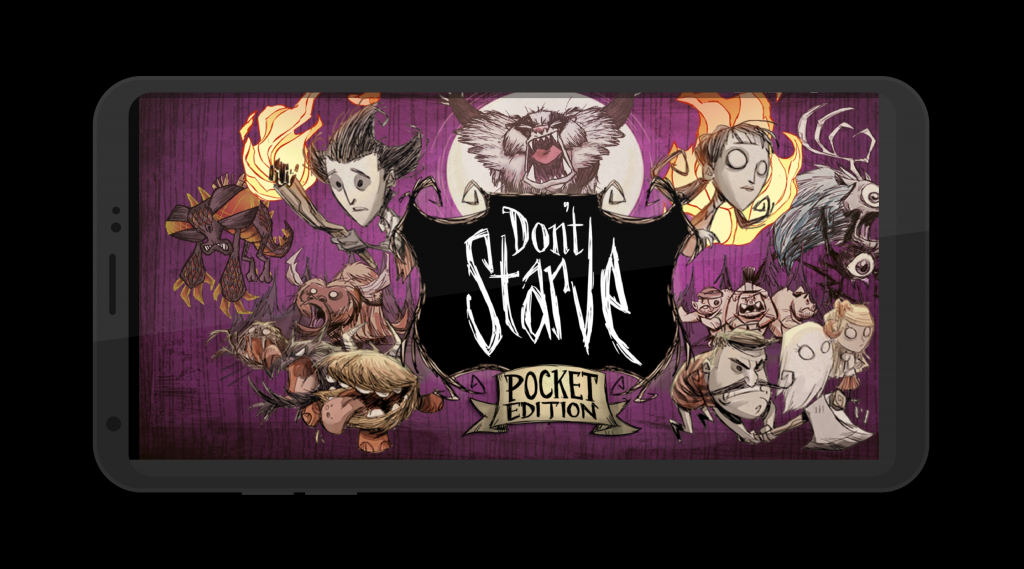 When you load up Don’t Starve, a haunting, brassy melody greets you – and sets the tone for the rest of the game. In addition to its absolutely beautiful graphics, KLEI’s signature game also features fantastic sound design. It doesn’t feature a full voice-over, but the Peanuts-esque whomp-whomp sounds characters make is oddly perfect for the setting.

Gameplay-wise, Don’t Starve gives no help; no tutorial, no hand-holding, not even an explanation of the controls. I found the lack of a tutorial to be jarring, but immersive – when you know as little as the main character, it really embeds you in the role. Exploring the world and figuring out the mechanics is half the charm of the game, as long as you’re ready for it. If you aren’t, it can be quite frustrating – consider yourself warned.

Don’t Starve is $4.99 on the Google Play Store. While that may seem steep for a mobile game, it should be noted that the same game on Steam or Consoles costs up to $14.99 – the mobile game is a bargain, by comparison.