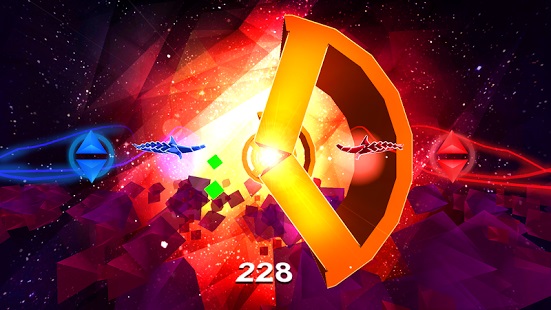 Why train one dragon, when you can train two in Comunique’s latest release Dracos.

Concentrate….Concentrate….Game Over. This is something you will have to get used to when playing Dracos. Utilizing both of your thumbs to control two dragons while they hurdle through a fantastic universe dodging geometrical obstacles will definitely call for deep concentration. However, the lack of concentration isn’t the culprit for all your failed attempts. Like most mobile games, the absence of physical controls hinder the gameplay, sometimes making the game unplayable. Unfortunately, Dracos has become another victim of this pitfall.

The game has a bit of a learning curve when trying to figure out how to maneuver the dragons in a semi-circular motion while avoiding obstacles. Once you figure that out, the amount of focus required does add a nice element to the game. The geometric visuals and vibrant music help you get into a rhythm, until you slightly skew your thumb and poof, the game is over.

There is a universal consensus that on-screen controls will never account for physical controls, although there are many ways to accommodate for the lack thereof. Assigning each half of the screen as a controller for a dragon or giving the user the ability to size and move the controls are two approaches many game developers have taken to fill this gap.

Overall, the geometric visuals and concentrated gameplay accent the game, but still not enough to overcome the poor controls the game has to offer.