The mobile phone industry faces few “technological” limitations it cannot overcome, yet battery technology continues to plague our mobile devices. While we have not developed a new technology to replace our current battery tech, there have been huge strides in software and hardware optimization to make sure our devices are as efficient as possible. DU Battery Saver – Power Saver is one piece of software that you can download on the Google Play Store that claims to offer such optimizations.

This entire review took place on the 128GB Google Pixel XL. I took usage statistics with my device for about a week before installing and using the DU Battery Saver – Power Saver for five days. While daily usage was not identical day to day, I did not add or remove any apps during the testing cycle since background app usage may skew results significantly.

The DU Battery Saver – Power Saver is easy to install, and the interface is simple yet deceitful. The large Optimize button will allow you to “optimize” you device for better battery life, and the Mode button will turn many of your settings off or down like screen brightness, screen timeout, vibrate, Wi-Fi, Bluetooth, Sync, and the haptic feedback while also restricting phone calls and messages. I found this to be the most useful part of the app. I was able to create unique modes with custom settings to maximize battery life. Take note though that I was creating these modes as I found the preconfigured modes to be far too aggressive for everyday use. 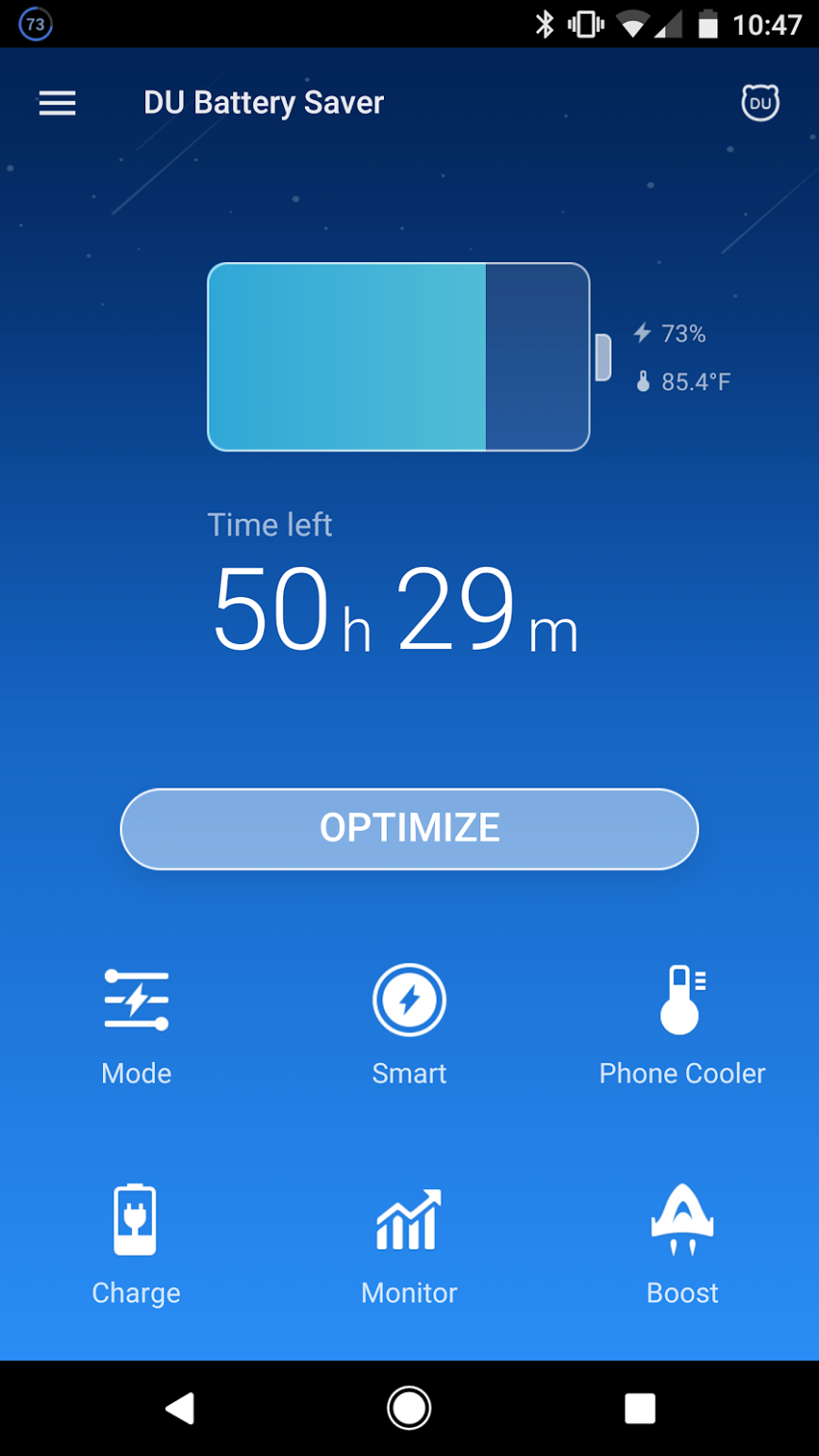 Other than Mode and Optimize, the rest of the UI exists to sell users DU coin, advertise, and give you information your phone can already tell you. We will start with the Smart Tab that appears to give users fine control over schedules, lock screen apps, and other settings, but they all turn out to be useless to users before purchasing these features with DU Coins. 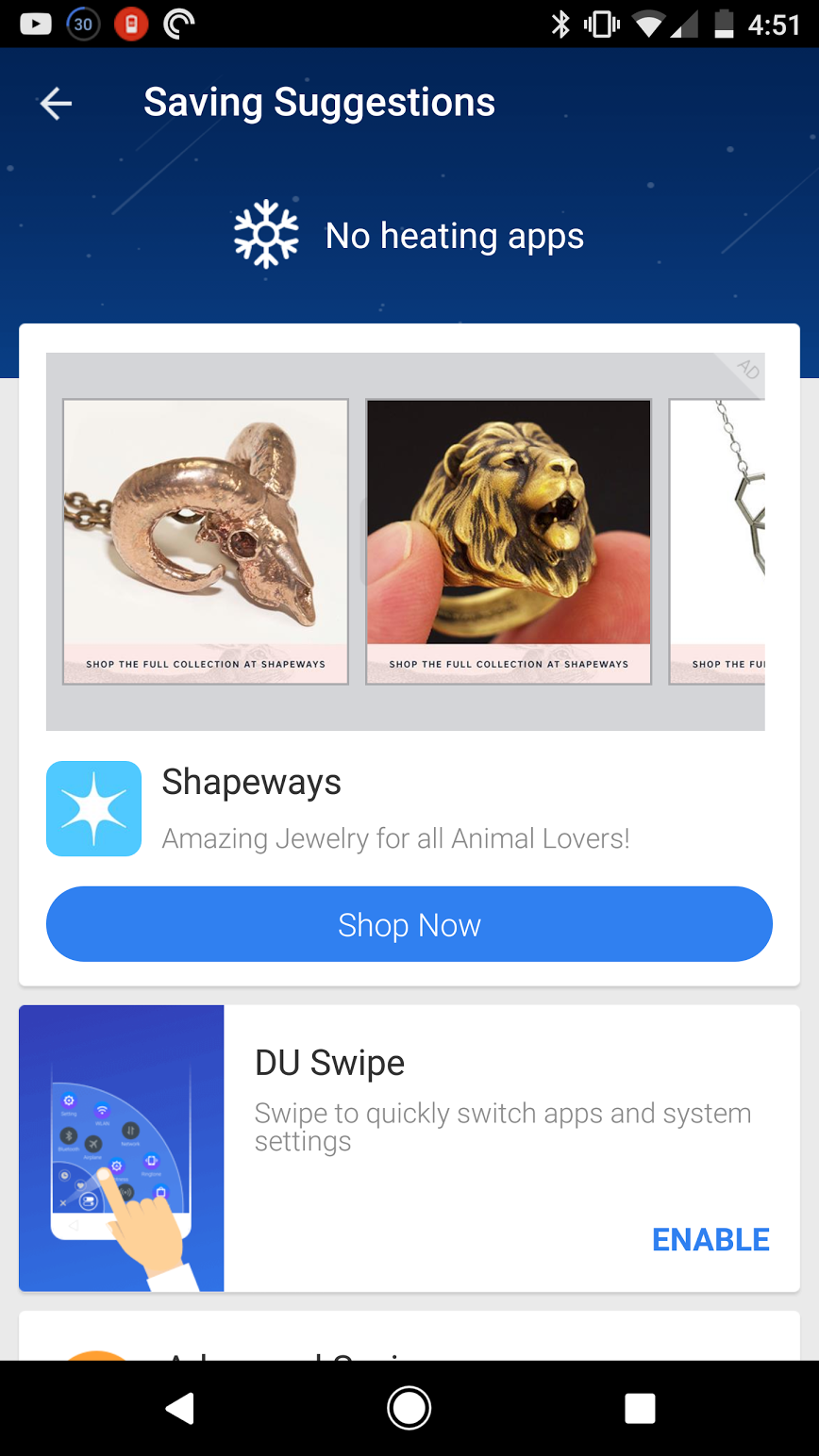 Next, there is the Phone Cooler button. On multiple occasions after extended gameplay and TV show binges, I tried to use this feature to see what it was about, but I received nothing but ads. The Charge button lets you know if your phone is fast charging, trickle charging, or full. Monitor is a less detailed version of your battery settings panel, and Boost is just a button you hit when you want to see yet another ad.

After playing with the app a bit, I felt very cheated by the interface. I understand that the app industry is a business and that the ad revenue produced by people viewing and clicking on ads is what keeps the free app industry afloat, but DU APPS STUDIO, the creators of DU Batter Saver – Power Saver, were extremely deceitful with the layout of the app, using the allure of additional functionality to generate revenue.

While the interface may not be annoying, many would be willing to forgive this if the app did what it said and users phones saw significant battery improvement. In my experience, my results showed there was little to no improvement with one day, in particular, seeing rather poor battery life.

To establish how effective/ineffective the DU Battery Saver is, I will look at the average screen on time throughout the two weeks when I reached the 10% battery mark (I was always within 3% points). I will then break it down into day-to-day usage. Just a note, this is not the most definitive way to test the effectiveness of this app, but it is a way that will provide satisfactory results while staying within the testing time frame I have set. To more effectively evaluate this app’s ability, it would require more data over a longer period with much more rigid controls in place.

After my two week test period, the numbers yielded about a thirteen-minute difference between my screen on times (excluding the outlying data in red). Without allowing the app to shut off my phone calls, messages, or other basic features that make my phone useful to me, I saw a 13 minute gain and spent my week squinting at a very dark screen due to lack of backlight.

After testing the DU Battery Saver – Power Saver, the app does little in the way improving battery life unless you are willing to sacrifice basic functionality. Combine the lack of battery improvement with abundant ads and I imagine users will find there is little offered by this app. For those looking to give it a shot, you can grab DU Speed Booster for free in the Play Store.