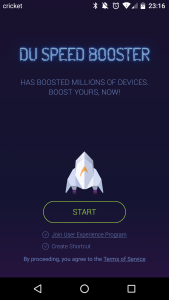 If you have a middle-aged Android device that seems to be working a little too hard nowadays, or if you fancy yourself a power user of multiple apps, you may find yourself looking into possibly installing a “speed-booster” type of app. 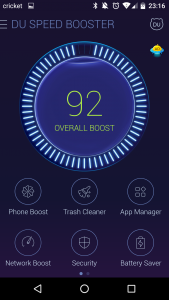 These app market themselves as being useful in cleaning up your RAM, trash, security, and other functions to maximize performance. These aren’t games or productivity apps, but function more as utilities, working with your operating system to keep it running smooth and light.
One very popular option in the Play Store is DU Speed Booster, from DU Apps Studio. This is a free app available for download in the Play Store. They also offer other apps including standalone anti-virus, emoji keyboard, browser (really!), and photo editor.

There are a couple more additional features that are offered within DU Speed Booster that I’d like to expand upon:

The first is ‘Game Booster’; this feature maximizes your device’s capability to run your 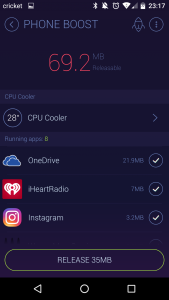 favorite (and often resource-intensive). It does this by closing other apps that may be running in the background and such, to clear up RAM space for your game of choice. When you download the DU Speed Booster app, you actually get a second icon on your home screen for this Game Booster feature.

This is a bit interesting, because as it adds a second icon, it’s not really a second/separate app. By opening this icon you get the exact same interface and functions that are available in the Speed Booster app’s main menu screen. I am not sure I care for additional icons being forced onto you home screen (imagine Facebook automatically adding a Messenger icon upon downloading).

The second is ‘Network Booster’, which is a bit of a misnomer. This feature doesn’t 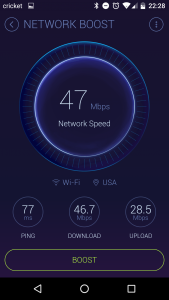 really boost anything; rather, it is a speed test app built within. Upon activating, it sends ping, download, and upload tokens out to the internet to quantify your current network speed (to see if you’re getting what you pay for).

These tests, while interesting, are truly a moment-in-time snapshot and not really a true measure of your network’s speed….so use these (not just this one) with a bit of caution.
For one, your day and/or time-of-day of testing can play a big part on your network’s performance. Example: My home network is fairly OK during the day, but once late evening comes along my speeds accelerate to at or above it’s advertised speed (check out the adjacent screenshot as an example).

Also, data is by its nature very bursty (is that a word?), meaning that data signals don’t send a continuous stream of 0’s and 1’s but, instead, will send a small pile of data for a very short period of time and then could go quiet for a bit. So, if you were to start this test while others in your home/office are enjoying a Netflix or YouTube session, you could see your speed numbers plummet (especially if QoS is implemented, giving video a priority in the network).

OK, soapbox moment over, back to the review. 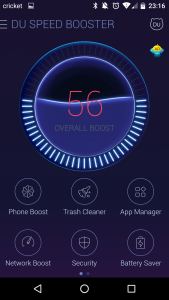 As stated earlier, the overall interface of this app is very clean and good-looking.  Upon opening you are greeted with a menu screen. Here you can either pick and choose which features to utilize (see bullet point list above), or there is a very large “OVERALL BOOST” button in the top-center to press, activating all speed-boosting functions on your device.

That’s really all there is to it in terms of app usage. There is a ‘settings’ menu, but it’s pretty limited. The best part of this menu is the “Phone Menu”; pressing this analyzes your device, and in a very short period of time, it presents you with a ‘task-manager’-style screen that shows you your CPU use %, RAM usage meter, ROM meter, SD card fill, phone signal level (in dbm)….plus the Android OS version, IMEI number, and handful of other secondary metrics. I found this to be one of the most interesting/useful portions of this app. 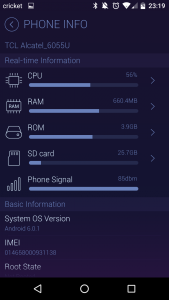 Which goes to the question: does the app work as advertised? I use an Alcatel Idol 4 as my daily driver, which isn’t a powerhouse phone by any standards. But, it does what I need it to do well. And, using a speed boost app, including DU Speed Booster, didn’t provide any visible performance improvement, no matter what app I was using at the time.  It didn’t hurt my phone’s performance either, so in my experience, it was pretty much a net-zero for me. 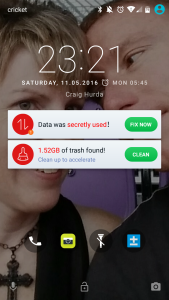 throughout this app. Running just about any function within this app results in a ‘results’ screen, and in addition to showing how much speed/memory is saved, there is a list of various ads running below.

The more you explore the app, the more ads you will find, as well. I understand this a free app, and this is how the developer generates their revenue, but the amount of ads was a bit of a turn-off for me.

Another negative was a recurring set of app notifications regularity popping up on my phone, warning me of how much performance I could be improving if I just used the app. I can be a bit OCD when it comes to keeping my phone and screen “clean”, but his may be even more irritating than the in-app ads. And, to make things more aggravating, I couldn’t find a way to disable these, either. Again, nothing life-altering here, but something I can definitely live without. 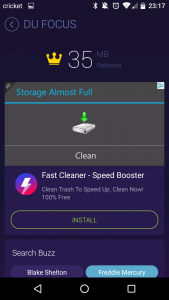 Also, the need for a “speed booster” type of app on your Android device nowadays can be a bit of a questionable topic. The more current versions of Android all are built to assign and monitor RAM as efficiently as possible.

Moreover, one feature of Android requires apps running in the background (to allow for real-time info and notifications) so manually closing apps will be a very temporary endeavor. Android and/or the apps themselves will just re-start themselves to continue operations as normal anyways. So, beyond the very-short-term you’re likely not getting a whole lot of value these days.

That said, if you are having problems with speed, memory, and/or performance of your Android device (especially if it’s an older model or OS version), you aren’t risking anything by trying DU Speed Booster. It’s at least worth checking out, and the clean interface makes it easy to do just that. Just be ready for some additional icons in your notification tray from time to time. If you can live with that, then you should be able to live with this app without issue.