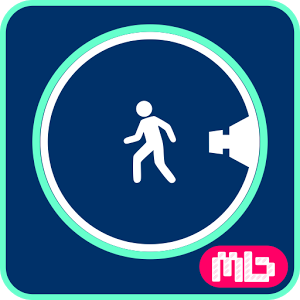 Eboe is an extremely simple yet extremely hard game. You are placed in a circle and have to move clockwise or anti-clockwise to avoid balls being shot from a cannon. That’s it. It is as boring as it sounds. Do be warned though: It is extremely hard.

Just like the gameplay, the developer Medbe has taken the “simplistic” approach. The main screen is adorned by your highscore, the “Play” button and a volume on/off button. There is no settings button as, well, the game just doesn’t require it. You can link it to your Google Play Games which is a nice bonus. I was confused when I started playing as there was no tutorial. Yes, although it’s simple it will take a few tries to adjust to what you’re supposed to do.

Adverts are a pain but fortunately there were few pop-ups as compared to the banner ads.

Like I previously stated, you are placed in a circle and have to move clockwise or anti-clockwise to avoid balls being shot from a cannon. The cannon is always directly opposite you so it cannot provide shelter for you. Usually when I review an app, I’ll spend up to 2 hours on it. However I got so bored after 10 minutes of playing that I decided to wrap it up. There were also no missions, story modes or challenges to justify the boring, repetitive gameplay.  It states “There is not much things to say about Eboe” in the Play Store description, and they certainly weren’t lying. Perhaps the only challenge is beating your high score, which is determined by how many seconds you can stay alive.

Is it for you?

If you’re that person who wants a quick play with an extreme challenge, check it out. Otherwise, it’s certainly not gonna tickle your fancy in hardcore gaming.

To put it bluntly, it’s probably not worth your time downloading it. It’s like eating the same food for dinner every night. The game mechanics and replay value simply do not hold much against other games you could be playing.