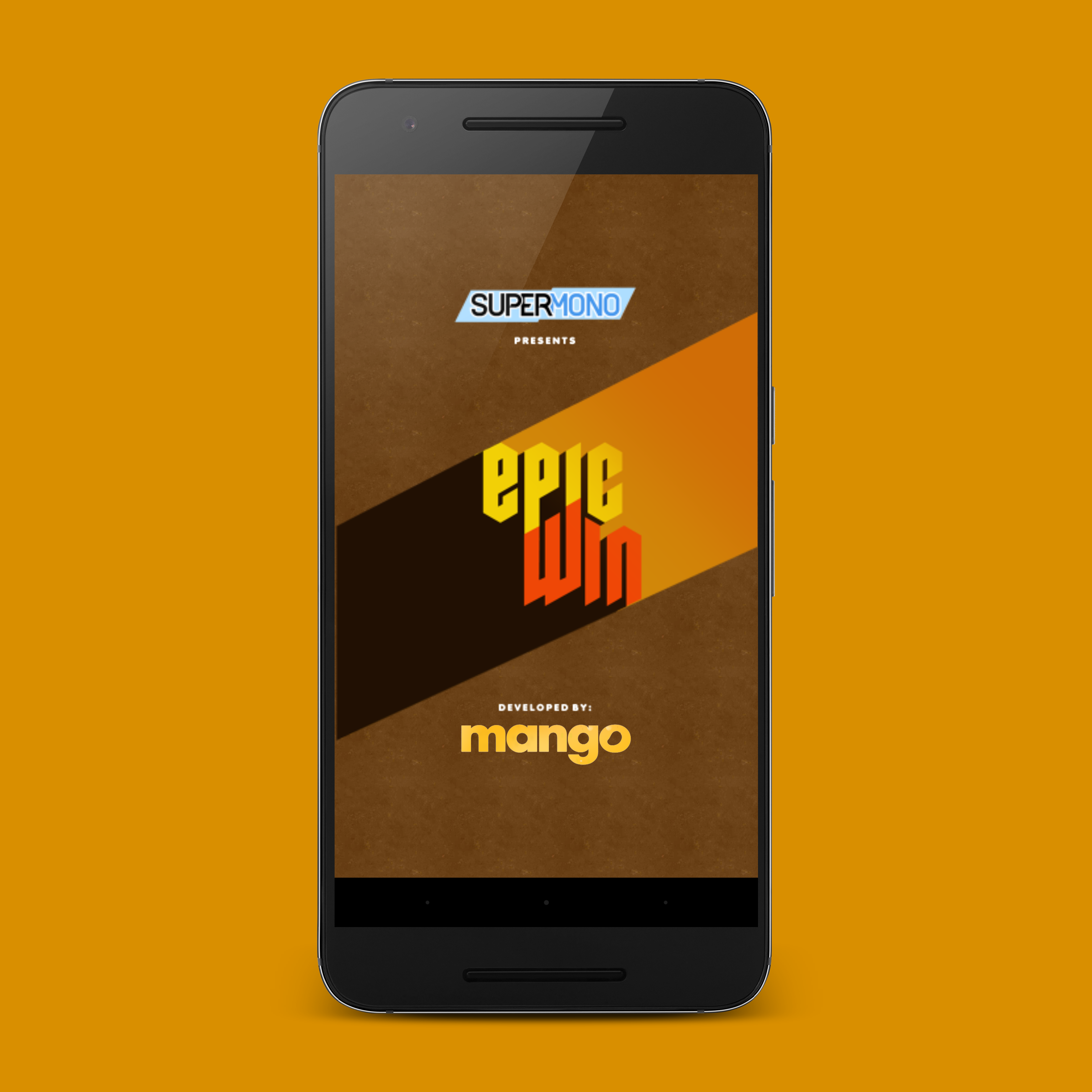 It’s always difficult to keep up with the things you need to do. Worst of all, to-do apps used to work only on one device, so whatever you did on your phone wouldn’t sync with your computer or tablet. Things have gotten better, and services like Todoist and Any.do have made everything easier. However, you can have everything setup and absolutely no motivation. EpicWin tries to get around this by introducing role-playing game (RPG) elements, such as experience, loot, and leveling up, to your traditional to-do list app. If you are not encouraged to do your tasks by using this app, then nothing will do.

You’ll start seeing the RPG elements right from the start. When launching the app, it will ask you to choose among five built-in characters: Dwarf, Warrior Priestess, Skelly, Warrior and Treeman Berzerker (seriously). There’s no way of making your own character, but at least you can name it however you like. I personally chose the Warrior Priestess and named it Lara (you know Lara Croft, right?).

After configuring your character, the app will show you its main screen populated with some default tasks. It’s a great way to get you started right away while showing how the app works and what you need to do.

Let’s remember that EpicWin was originally introduced on iOS, and, after a successful launch, it was ported to Android. This is reflected in EpicWin’s bottom tab bar. Even though iOS encourages developers to use this element, it really feels out of place in Android.

The top part of the screen is reserved for displaying your name and a button to create a new task. The rest of the screen shows a list of your tasks, sectioned by date. In case you have overdue tasks, they will all appear under the same category to make their completion easier.

To create a new task, tap the previously mentioned button at the top, or tap the + icon that appears beside the date. Here you will be able to choose the date of your task, the hour to remind you and the description.

To the right, you’ll find a circle with the legend Epicness. This can be used to rank the difficulty of your task. If your task is as easy as buying a pencil, you can safely lower this score to 50 by dragging inside the circle towards the center. If you want to increase the epicness of your task (up to 300), drag inside the circle towards the edges. This number will reflect on the score you get when completing said task.

Also, in this screen you’ll be able to categorize your task under five different categories: Strength, Stamina, Intellect, Social and Spirit. Finally, you can schedule a task to repeat itself. The app gives you the option to repeat a task in multiple intervals, ranging from daily to once a month.

When completing the task, you’ll need to hold the badge that shows you the difficulty level, and the game will show a nice little animation that simulates your character fighting the task until it falls defeated. Just like Digimon absorb their enemy’s data to improve its powers, your character absorbs the task and increases his/her stats depending on the category you chose. You’ll sometimes also get loot after completing your duties. It’s an entertaining mechanic and makes the whole concept a little more believable. 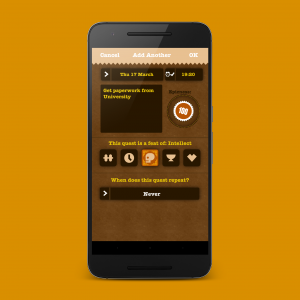 Want to skim through your completed deeds? There’s a tab for that, and it’s call Beaten. This section will display your completed tasks since the beginning of your quest, sorted by date. Also, when touching one, you’ll get an option at the top that says “Do it again,” which lets you create a new task based on the one you selected.

As in all RPGs, you have a profile page where you can check out your stats, your avatar and your current level. It will also show how many experience points you need to level up. There’s another tab called Loot, in which your character simulates some sort of travel across wastelands. Here you can check the items you’ve received throughout your journey. There’s dozens of items to be found in your voyages.

Finally, there’s an options tab where you can turn on or off special effects and background music, change your avatar name, delete all completed tasks, a manual, information about the developers, configure a weekday reminder, and data backups. They’re local, though, so don’t get your hopes up. There’s no integration with online services yet, and EpicWin doesn’t provide its own.

Graphics-wise, the game tries to maintain a rustic appearance, with different tones of brown used throughout the app. There’s no fancy elements, just to-the-point components. As previously said, the bottom bar is not in line with how interfaces are done in Android. The avatars look good, though, and the animation when completing a task is fun to watch. Likewise, background music and special sound effects are appropriate, but nothing to write home about.

EpicWin’s take on a to-do list app is interesting. By incorporating RPG elements to the formula, it hopes people will do more and have fun while at it. There’s no in-app purchases to make or pro versions to buy, which means you’ll find some ads while using it. Even though I feel like Habitica is more robust right now, it can be overwhelming for newcomers. If you have difficulties in completing certain tasks, and you like games (who doesn’t?), then this app may be for you.

Five of the best productivity apps for Android in 2019