Do you remember Mario? The awesome hero plumber that burst onto the game scene and took it by storm? Ever since the success of The Super Mario franchise there have been copycats trying to replicate Mario’s recipe for success. Hundreds of platform games have tried to emulate Mario although they have always been disappointing.

The Farting Pig may have broken that chain of disappointment. In the slide scrolling 2d platform adventure, The Farting Pig tasks you to play as a cute pink pig and save him from an angry mob of crazy farm animals. Run piggy run! The unnamed pig runs, jumps and farts his way through 3 different locations: Barnyard, Grand Canyon, and Cornfield.

As the piggy runs through each location, he has to head-butt haystacks to collect coins to unlock or buy new special items. Some of the haystacks once hit, give you a pink pig nose that gives you  an extra life, which you will need since you are basically a defenseless pig throughout the entirety of the game.

Some foes that you will encounter as you run for you little piggy life are: Boxing Rooster, an evil rooster who throws some mean combinations anytime you get to close that kill you instantly, Suie-the-Racoon, a suicidal bomber who tries to blow herself up anytime you get within 4 or 5 feet, you also have Porcupine and the Seed-Shooting duck,  who we will let you figure out what they are capable of doing. With so many foes, you are going to have to try to run and jump your way through their clever traps, avoid the electric zappy fence and not get horned by the mad bull! 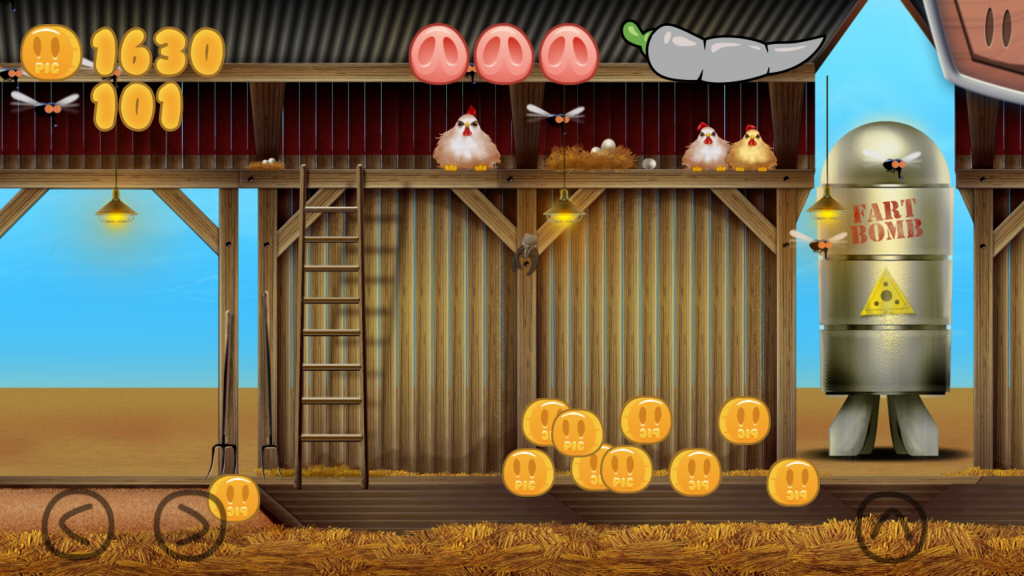 The Farting Pig immerses itself with colorful visuals and interesting characters. In many modern mobile games, you are able to fly effortlessly through levels, but in this game that is not the case.

The game starts off difficult with awkward controls – the placement is way too close for having you to press them at a moment’s reflex. Many times I observed myself pressing the wrong direction or just my device’s screen, instead of pressing the correct button to complete my killer combination of moves. Also, the pig is huge and is expected to jump and double jump to grab coins avoiding chickens, flying seeds, and bombs.

If the pig is punched, a seed hits him or a bomb explodes on him, and he dies instantly, which slows down the flow of the game. The pig dies way too easily and is very frustrating. While we all love difficult games, (I am talking about you Dark Souls), after a while you begin to lose your will to play.

After dying a couple of times, I closed out the game and came back to it the following morning. I felt the same non fulfillment as I had the day before, thinking, this pig is outnumbered, out manned and it is not worth continuing. I understand making a game difficult, but making it so difficult your audience is unfulfilled and unengaged is senseless.

With all that being said, as I was about  to close the game out again, I decided to play a little longer.  As I played more I lived longer and accrued more coins. Eventually I was able to collect enough coins and purchase cool weapons.  The arsenal consisted of  weapons such as  the Shrink Gun, Hoverboard, and Flower-Power to calm down the farm. Want to get all of those cool gadgets from the beginning, good luck. It took me countless times of dying before I was able to accrue enough coins to get them all. 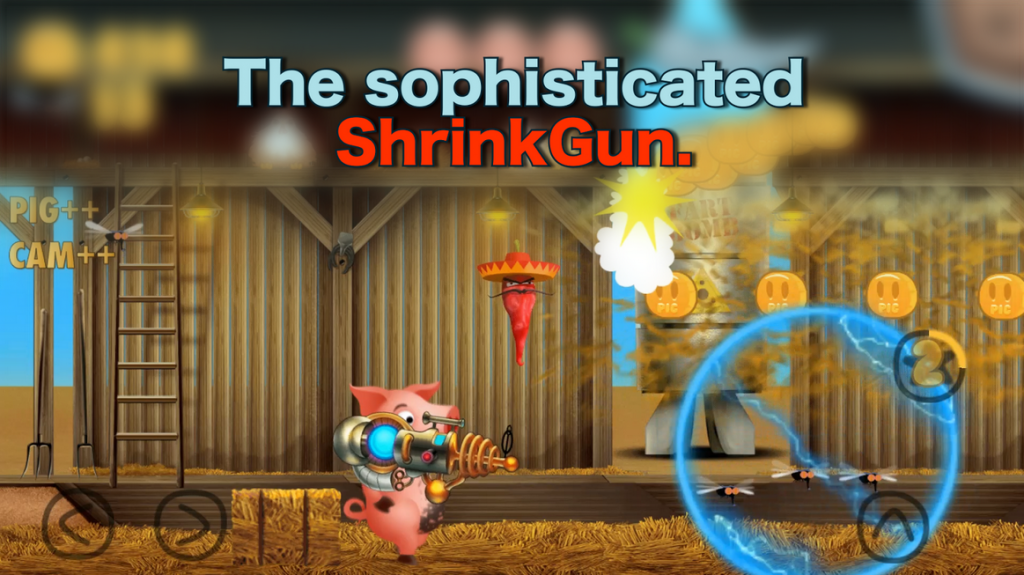 One thing that I noticed when playing the game was that The Farting Pig fails to inform you why this cute little pig is being attacked by a mob of angry farm animals in the first place. While a storyline is not needed to play this game, it still would have been nice to know the backstory behind all of this chaos.

The difficult gameplay is not for the casual gamer looking to pass time and to achieve rewards quickly. The Farting Pig is suited for hardcore gamers or those looking to laugh at a pig farting and flying through the air.

Have you played The Farting Pig? Tell us what you thought in the comments below!