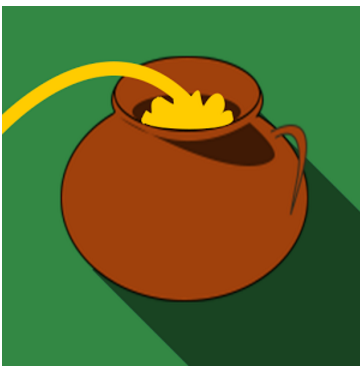 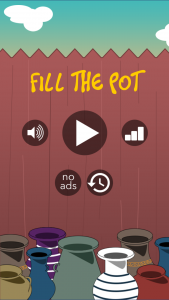 eeing in a bucket. That is the basis of this Android game. I’m not kidding. Fill the Pot by developer South Pacific Apps is a physics game where everything rides on your…um…aim. (I’m requesting official kudos from the AndroidGuys editorial team for my restraint from multiple bathroom metaphors in this review. It was not easy.)
You play the role of a homeowner in his backyard (apparently) who REALLY has to relieve himself. Yes, you play only males in this game, if you were really thinking about asking that question.

You start by downloading the game from Google Play, of course. The game does link you to your Google Play Games account, if you so choose. If you don’t link to your account, you won’t be able to access leaderboards or log your achievements. If that’s your thing.
After startup, you start with only a single avatar to use (more avatars are available as you 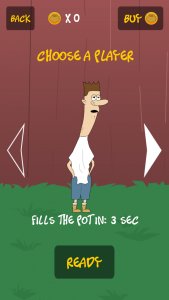 collect bonus coins in the game). This initial avatar can fill each pot in 3 seconds (more on that in a moment). The higher-level avatars can fill pots in shorter times, through both accuracy and flow.

When each pot appears, a countdown timer begins on-screen. Each timer is of varying time. You have to:

The controls are the weakest point of the game, in that they are just not discrete enough. The gyro (or tilting action) worked fine for me, but the up/down controls were simply too crude. I continually under – and over – shot my target; this is frustrating when you know you’re more accurate than that….male pride steps in here. 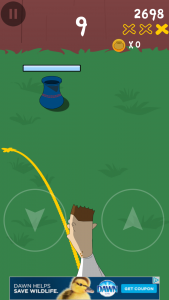 If you successfully fill the pot in time, that pot disappears and another magically appears in a different location, dictating you adjust your placement to start filling again. You continue this endlessly, until you can’t fill a pot in the allotted time. To quote the developer, “Don’t worry you never run out of pee.”

During this urinary steeplechase, random bags of coins (of varying value) appear. They are clearly a temptation: veer to the money and collect it for upgrading your avatar, but to do so you risk losing valuable filling time. Such choices in life. Count me in as a dedicated urinator (is that a word?). During my time with this game, I never could grab enough coin to upgrade my avatar, as I was solely focused on pot-filling.

The game actually hits high marks here. The graphics are simple but with bold primary colors that don’t grow tiresome. The sound effects are very realistic, from the standard ‘flow’, to bounding off the side of the targeted pot, to the oh-so-satisfying sound of proper fillage (you know what I mean, fellas). All the while the never-ending bing of the countdown timer reminds you that your life in this game is tenuous.

Honestly, the game is fun to play, and could be much more so if the controls were fine-tuned some more. Unfortunately, the game’s premise is bound to deter some folks from having this on their device, let along playing it in public. A similar setup with a more publicly-acceptable premise would certainly make it more public-friendly.