Welcome to the first of our planned series of Android software snapshot reviews.Â  Rather than going really in-depth with pros and cons for each title, we’re going to hit you with quick bursts of app recaps.Â  Starting today, we’re going to offer five instant reactions to some of the newest applications arriving in the Android Market as well as some other places.

The jist: We fell in love with this one right away.Â  The game is reminiscent to Simon, the handheld game from the 1980’s.Â  It has a clean look, simple layout, and quality feel to it.Â  We can’t wait to see what the full version holds.Â  According to the developer, the full release will have 100 levels to it.

The jist: Not the prettiest looking game in the world, but it can be addictive.Â  Based off of the Hanoi Towers game, the premise is to move all the bricks from left to right, stacking smaller bricks on top of larger ones.Â  With a maximum of 10 levels to play, it definitely gets hard quick.Â  If you want a quick challenge while you wait for the girlfriend to finish getting dressed to go out, try this one.

The jist: You know that game you play at Cracker Barrel when you are waiting for your food?Â  The one played with golf tees in a wodden triangle shaped board?Â  This is that one. While this current version has a couple of improvements over the initial release, it still misses a few vital elements.Â  The game does not tell you it’s over, indicate how well you did, or prompt you to start again.Â  Okay, I left two pieces on the board.Â  How well did I do?Â  At least with the Cracker Barrel version we’re told whether or not we’re “just plain dumb.”Â  In the future, we’d like to see color and sound options implemented too.

The jist: The classic game of memory comes to your Android phones.Â  Unfortunately, we were hoping for more options, but it’s a good start.Â  A couple of ideas we’d like to see implemented would be a full screen game, sounds, vibration, multiplayer (of course) and a lot more themes.Â  Instead of flowers and planets, let’s see some robots and androids!Â Â Â  Oh, and make the back of the cards prettier.Â  At first glance, the game looks like something out of the mid 80’s.Â  Like we said – good, not great.

The jist: A cross between tic-tac-toe and Connect Four, this could entertain for a while.Â  The one problem we found playing with the wife was that finger nails prevented her from being able to touch the square she wanted.Â  The game does work full screen so it’s probably a G1 screen issue more than an Android problem.Â  We had a nice chuckle when looking through the difficulty settings where the easy level is “My cat wants to play” and the hardest was “Smarter than Droids.” 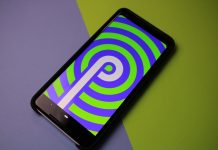 Android Pie Review: The reason why I gave up my iPhone X