Fracter has been described as a mash-up between Limbo and Monument Valley, two extremely popular and beautiful games. When your game is in the company of those two you’re off to a good start. With the use of a dark eerie geometric world, it is no surprise it has drawn comparisons to these two games. However, can Fracter live up to acclaim that both Limbo and Monument Valley have garnered? That’s what I set out to discover.

Fracter’s story revolves around a girl trapped in a world of darkness looking to reunite herself with the light within. It is filled with metaphors such as “The Maze is empty, the only monsters you find are the ones you bring”. It is lines like this which elevates the gameplay from just a puzzler to something more deep and meaningful. You aren’t just chasing after something or collecting items. Instead, you are trying to put yourself back together and root out the darkness that is within. 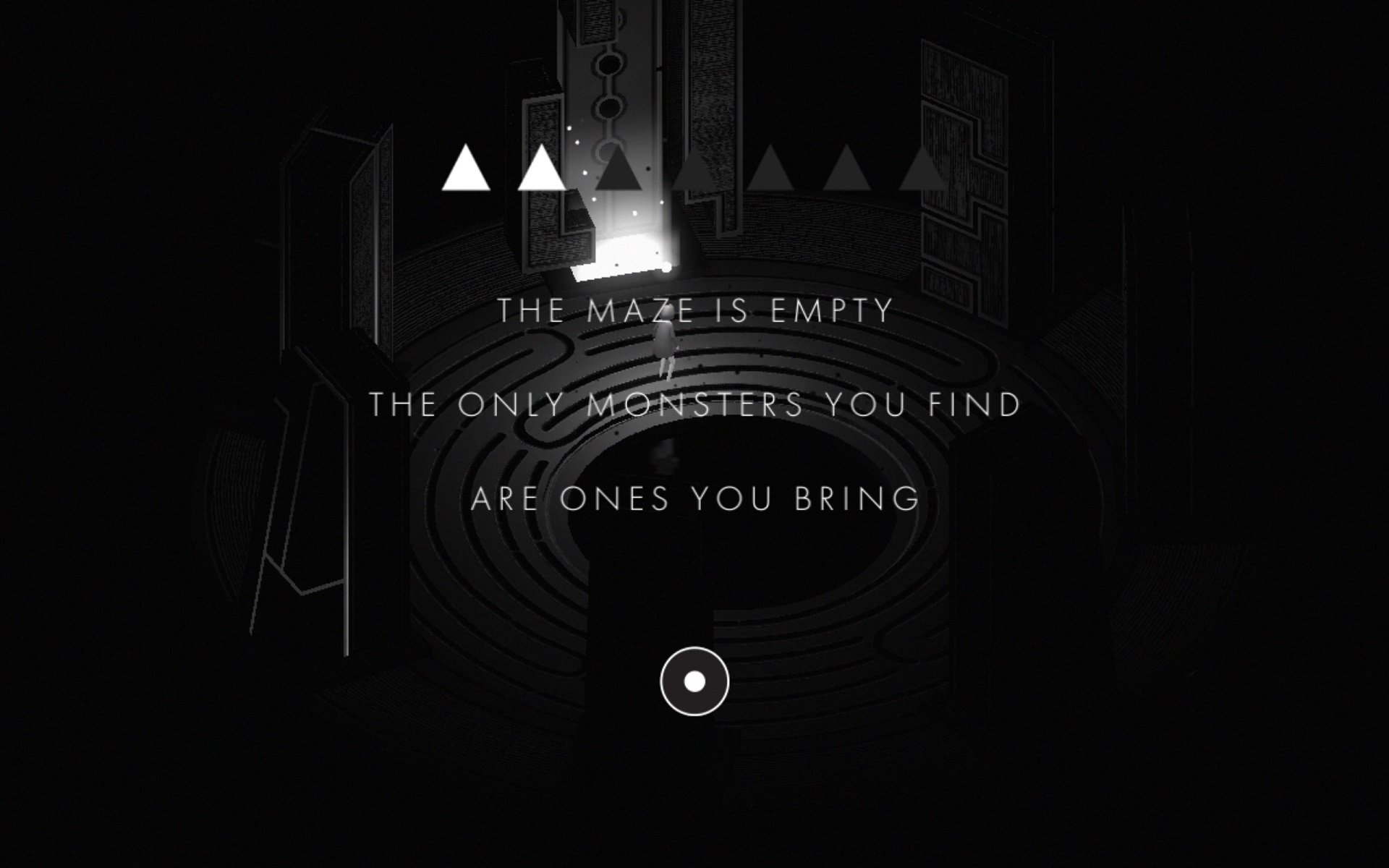 You begin Fracter as a girl exploring a dark room with a mirror. After looking at yourself, many light versions escape running off leaving you weak. The only way to regain your inner light is to enter the different doors and locate all of your missing pieces. 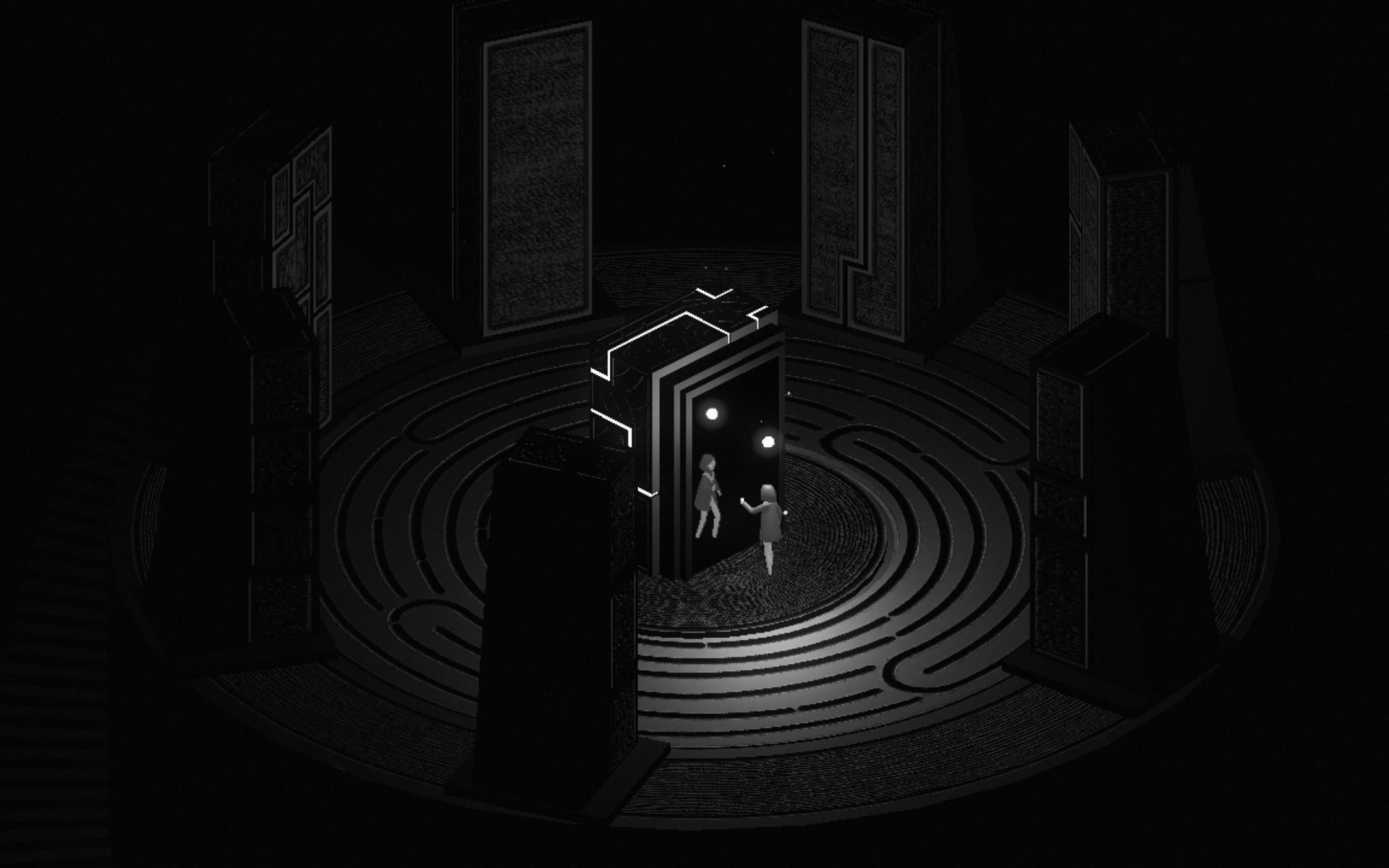 Behind every door is a pitch black maze filled with winding paths, puzzles, and shadowy beings that attack you on sight. It is your task to wander these mazes without detection solving puzzles to open new paths in order to reunite yourself with your light counterparts.

Similar to Monument Valley there are no special powers or jumping involved. You traverse the shadows alone with only an orb of light above your head to light the way. Not only does it light the way, but when it begins to pulse you can tap on it for a tip, usually about how to solve the current puzzle. 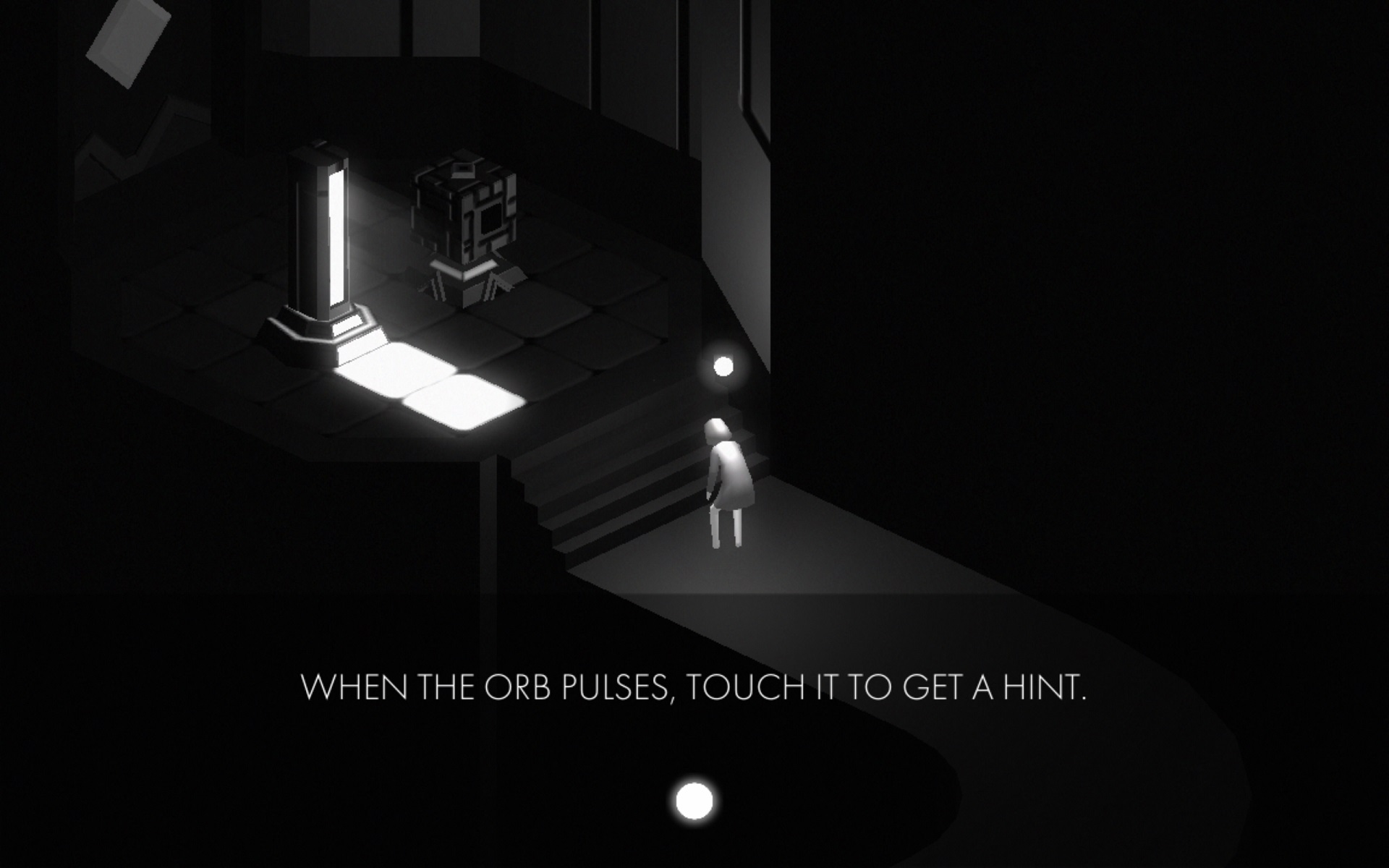 The puzzles consist mainly of towers of light that must be rotated or bent with mirrors to activate cubes, blocks that must be moved, and rotating platforms. These start out very simple in the beginning to teach you the mechanics and become more challenging later when they are combined together.

The puzzles themselves aren’t extremely difficult but become more challenging due to the darkness, your limited field of view, and dark beings lurking through the levels. You have no attacks or special abilities to kill these beings. Instead, your first option is to creep behind them or hide to escape being detected. Your other option is to use light as either a force field or to trigger it once they are in its path to kill them. 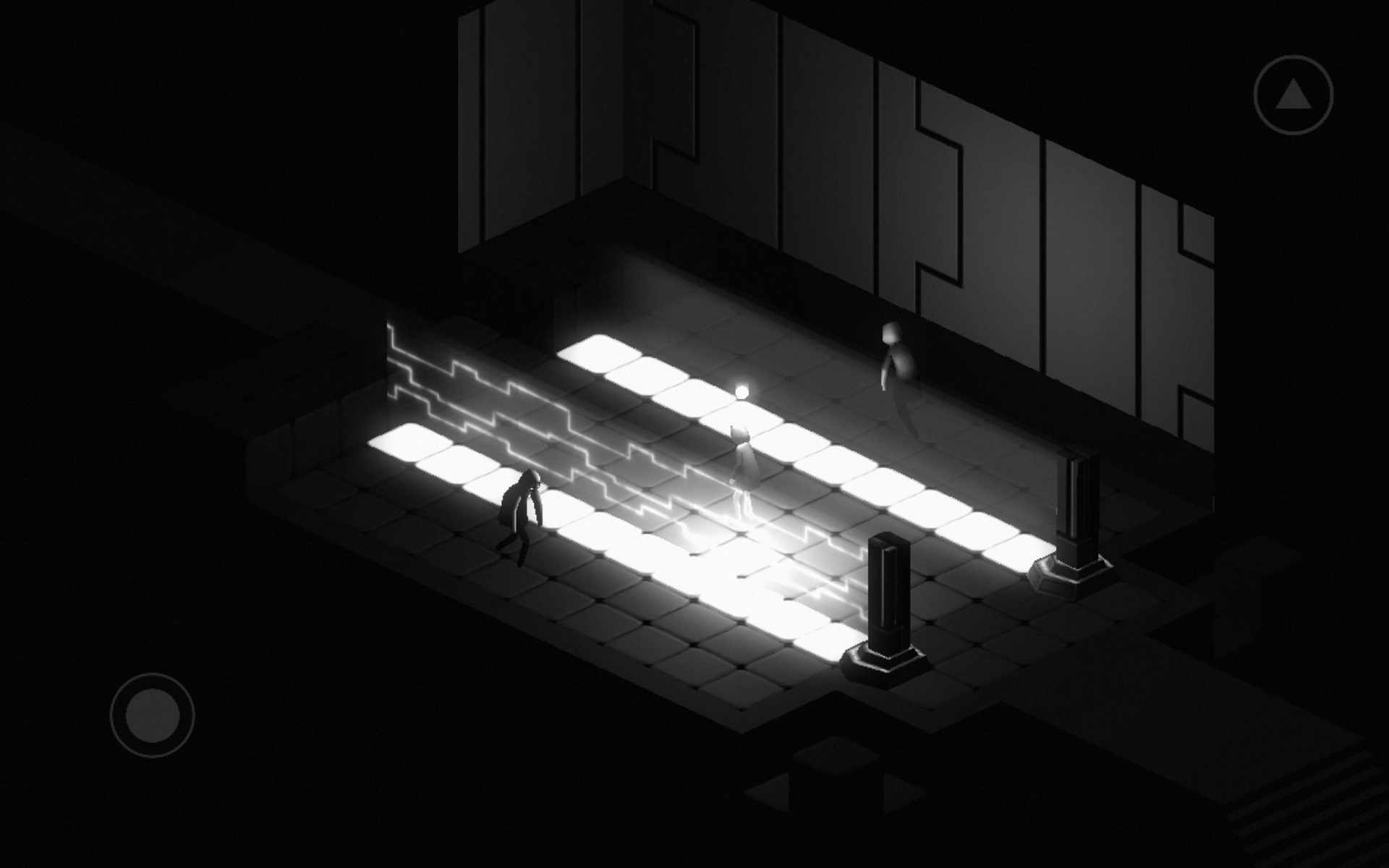 If you are unlucky enough to be discovered these dark beings pounce on you so quickly it is often impossible to avoid. Be careful to step lightly as you explore and to learn their patterns as they patrol to evade being noticed. However, if you are captured don’t worry because you won’t have start from the beginning or lose any of your fractured pieces. You’ll simply respawn somewhere nearby.

An important aspect which cannot be overlooked in games such as Fracter is the sound design. The ethereal soundtrack helps immerse you in this gloomy world they have created. Combined with the sound effects from your footsteps, moving pieces during puzzles, and warnings of shadowy beings closeby and sound becomes an important detail in this game.

Most games that make such extensive use of sound suggest wearing headphones while playing but Fracter does not. I highly recommend it though as it really amplifies the immersion in the game.

To guide your way through the maze and around obstacles Fracter makes use of a virtual joystick. You’re given the option of a static position in the bottom left corner, hold to move, or a floating joystick. 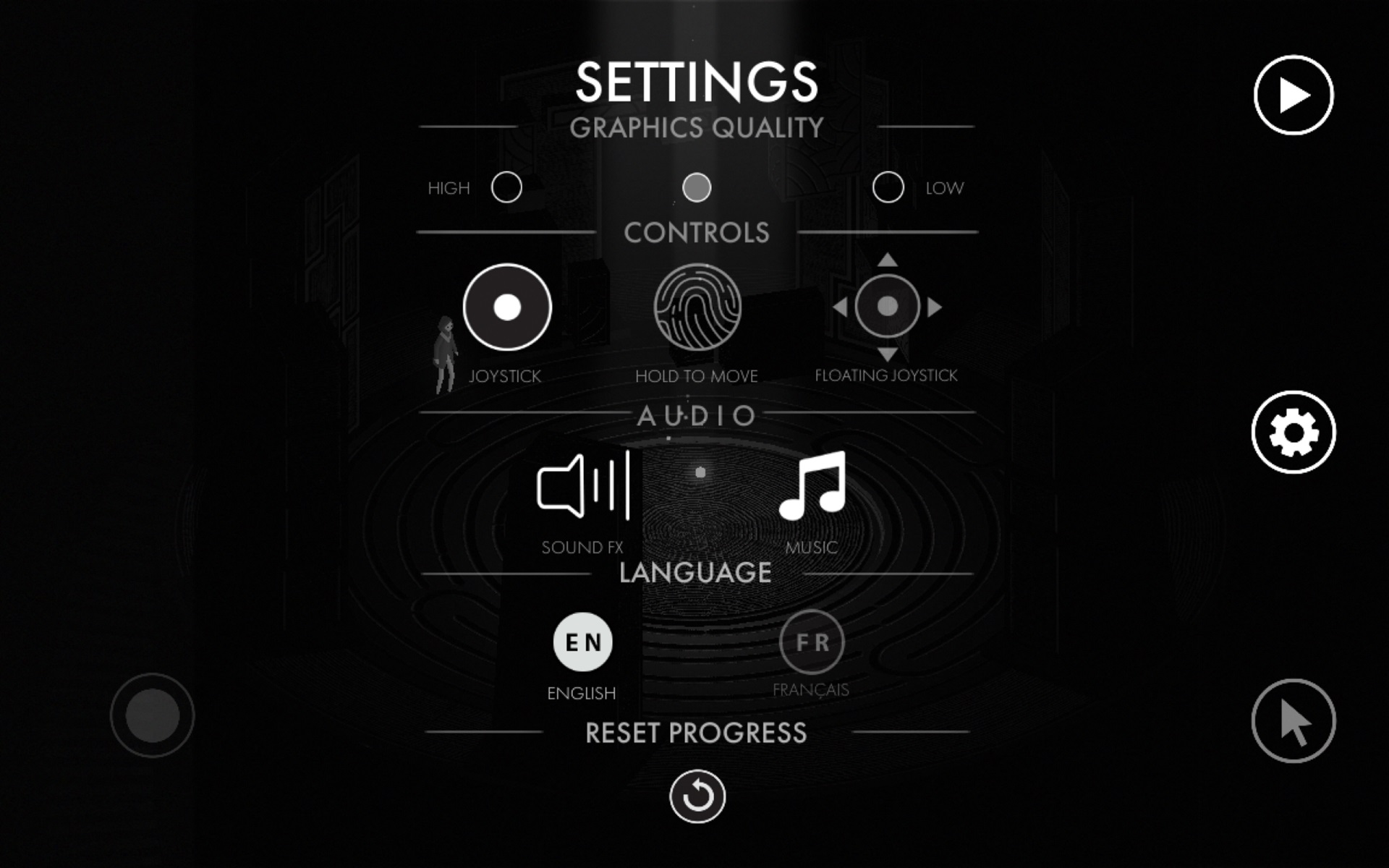 I preferred the static joystick to keep things consistent but the floating joystick that appears wherever you place your finger is a great option. Outside of the joystick, you’ll also find yourself tapping and turning columns of light to help solve puzzles as you go along.

Fracter has successfully combined the dark mysterious feel of Limbo with the geometric world design and puzzles of Monument Valley creating something unique in the process. The absence of light along with the limited view keeps you on your toes while exploring and makes the puzzles more challenging. Thanks to the wonderful sound design you feel immersed enough in the game to make your heartbeat race when you come across beings lurking throughout.

My only criticism would be that the levels get a little long in the tooth as you progress. This leads to you wandering around lost in darkness more when I’d rather be solving puzzles. However, this is part of the maze aspect of the game and I just happen to prefer solving puzzles over mazes.

Besides that, I really enjoyed the game and if you’d like to give Fracter a try as well it’ll set you back $3.99 in the Play Store. If you find that to be a little expensive, I’d suggest adding it to your wishlist and watching for a sale because it is certainly worth a playthrough.