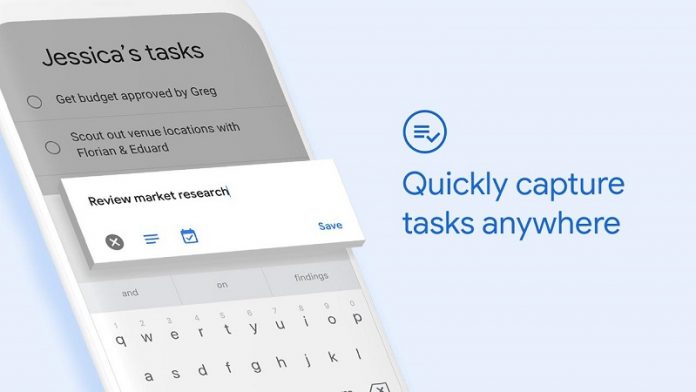 Google this past week, introduced a revamped Gmail interface, along with a dedicated Tasks app for Android and iOS.

Known for its scattered approach to messaging, Google fares no better when it comes to its to-do list apps. The search giant has been offering Google Keep for taking notes, Google Reminders, and Google Tasks, which was previously buried somewhere in Gmail’s messy interface.

In an attempt to declutter this confusing landscape, and give you a viable alternative to sort through your daily chores, Google has outed the Tasks app. One of the big barriers to adoption for Google Tasks in the past was the lack of a dedicated mobile app. Now this issue has been solved.

So what does the new app bring to the table?

You can download the Google Tasks app from the Google Play Store for free. Just install it and tap on the Tasks icon to launch it on your Android device.

Let’s get one thing clear from the start: Google Tasks is not a full-featured to-do list app. In fact, the app is extremely minimalist when it comes to both interface and function. It sticks to the basics in order to get the job done. Well, at least in part. Hey, at least it won’t distract you with any flashy elements, right? 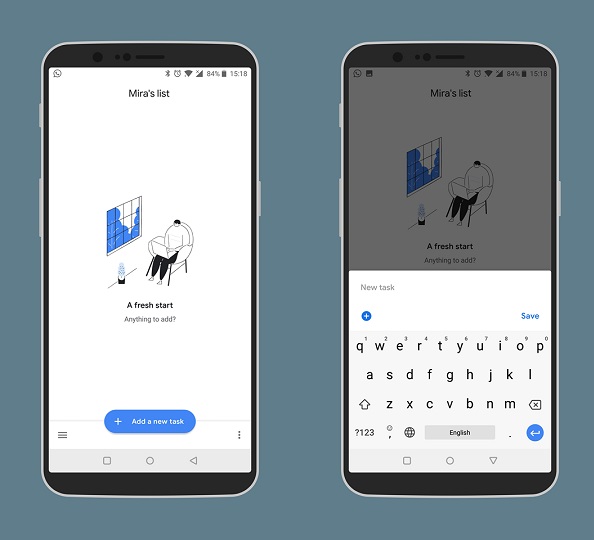 To start creating lists, simply access the app and tap the “Get started” button. Then tap on “Add a new task”. It’s quite easy.

Check the hamburger menu which expands into a little overlay if you want to:

The app lets you create as many lists as you want/need and create sub-tasks too. Simply tap the Add a new task blue button and type a relevant text. 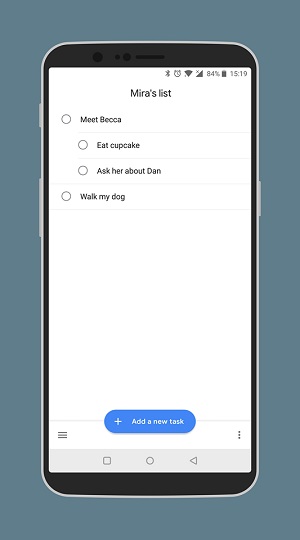 Tap on a particular task to add more info, such as:

Tasks can be reordered manually. Just tap on the three dots in the bottom left corner and tap on My order. Tap the checkmark next to each task to complete one or you can swipe them from left to right. There’s also the option to delete all completed tasks, otherwise they will show up in a sub-menu under Completed. 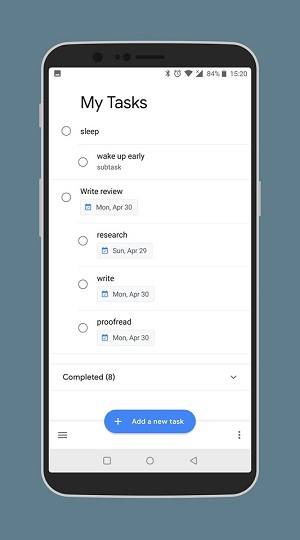 The app sends notifications to remind you a task is due. However, in my experience some notifications got lost and were never delivered.

Tasks are also accessible in the new Gmail interface. Tap the icon located on the vertical panel on the right and start adding tasks. You can also add emails as tasks in the web Gmail interface, just drag and drop them. Everything will be synced between the web and mobile version. 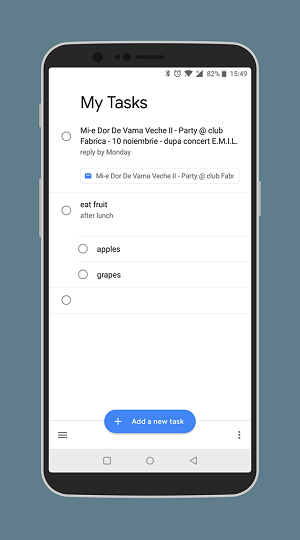 While its main drawing point is the Gmail integration, Tasks is a very limited service which can’t yet compete with the likes of Todoist.

But apparently, that’s exactly what Google was looking to offer – a “simple-to-use and straightforward tasks app.” Nothing more. Although, Tasks product manager Florian Goerisch revealed there are plans to bring additional features to the app.

We’ve seen what Tasks can do, but what can’t it do? Well many things. For example you won’t be able to set reminders or assign a certain time to a task, share lists with others, add tags or alarms. There’s also no integration with the Google Assistant.

Even though I fully appreciate Tasks’ simplicity, I can’t help feeling Google left out some essential features that would have really made the app a lot better. Like the ability to set a time deadline for your task. But hopefully, the app will get better over time, since there’s clearly plenty room for a lot of improvement.