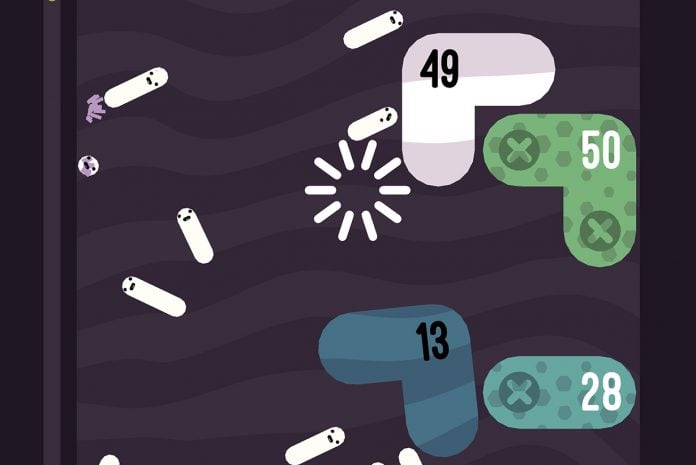 Holedown is part strategy, part embrace-the-chaos, and completely addicting. This brick breaking game turns the genre on its head and takes you to other worlds, literally. Holedown takes you into space to mine several different planetary bodies starting with an asteroid and going all the way up to the sun.

There isn’t a big back story to this puzzle shooter game. Basically, you’re here to chew bubble gum, break blocks, bust cores, and I’m all out of bubble gum. So, what are you waiting for?

In every level, two different styles of blocks and a core at the bottom stand in your way. Each block and the core has a number that represents how many times it must be hit before it is removed. One of the blocks is permanent and cannot be cleared unless you hit it enough times. While the other type of block can be removed by either hitting it enough times or eliminating the block supporting it. That makes it easier to clear several blocks at once.

While this all sounds fairly simple, what throws a wrench in the works are the rounded corners on the blocks. It makes predicting what the balls will do more difficult and sends them flying all over the screen. Making each shot more exciting because you know what you want to happen, but you’re never quite sure where the balls might go flying after a couple of bounces.

What makes this even more challenging, is you start each level with a limited amount of shots and number of balls that are fired with each shot. The good news is, there are upgrades. Each time you play a level you collect crystals which can be used to purchase upgrades.

Upgrades include extra balls, extra shots, extra levels, and more. Don’t worry, there are no in-app purchases, everyone has to earn their crystals and upgrades the honest way. You also have the ability to reverse your last purchase if you change your mind.

Each new level is a larger planetary body with a new theme and new soundtrack. As the planetary bodies get larger Holedown gets progressively harder. Nothing about the gameplay itself changes but the blocks take more hits to remove.

Not only that but the block layout is randomized each time you start. Sometimes you get lucky, while other times you crash and burn early. However, it’s always fun and you keep collecting crystals to upgrade making each attempt easier than the last.

After many hours with Holedown, I’ve learned some techniques that could be helpful for new players. Aim for the rounded edges to send your balls to the side or downwards. This adds a lot of momentum and the side bounce helps rack up more hits on the blocks. Also, try to aim down as low as possible. If you can set off a chain reaction at the bottom it’s possible to clear many blocks at once by taking away the bottom support block.

The gameplay in Holedown is simple yet satisfying. It is one of those easy to learn but hard to master type of games that I love. There is something so satisfying about watching 30 balls go crazy, bouncing all over the screen racking up hits and taking out blocks.

However, there are only six levels with the last one being an infinite hole with no core. For a $4 game, it would have been nice to see some more levels or challenges. Perhaps a star rating for breaching the core in the fewest amount of shots or something similar. It would have been a way to extend the challenge and keep you engaged.

Regardless, Holedown has been a blast to play and has been my obsession for the past week. I’m sure I’ll still rack up many more hours in the future when I’m looking to waste some time or relax.