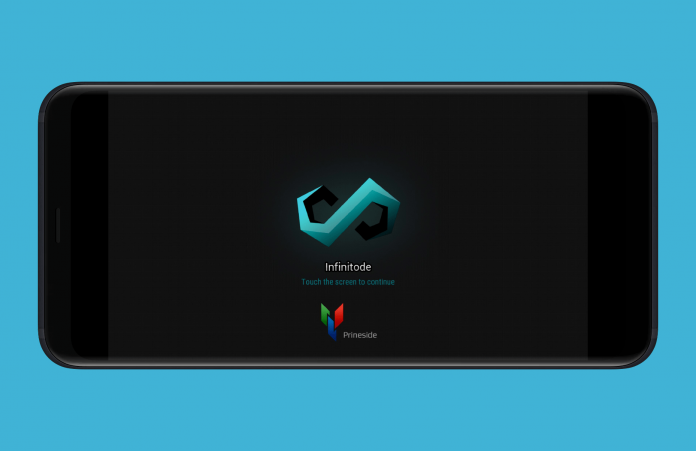 Browse the games section of the Play Store for a moment and you will get a feeling that entries are comprised of endless games, Clash Royale clones, or a combination of both. Although there are for sure a lot of gems in the store, a lot feel like a quick cash grab rather than a well-executed game with fun mechanics. That is why, when I read about Infinitode, I thought that it was just another generic endless game designed with microtransactions in mind. Boy, I was wrong.

Infinitode is a short way of saying Infinite Tower Defense. The best way of explaining this game is right there on the title. Infinitode combines the well-respected tower defense genre with a twist of never-ending action. Think of it as a Kingdom Rush that never ends. While in other tower defenses you have a set of waves you have to clear in order to finish a level, Infinitode just keeps generating waves forever until you die. Of course, there is much more than that. 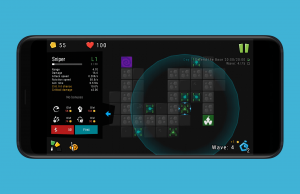 The game features a very long tutorial, in which almost every aspect of the game is explained thoroughly. I feel like a tutorial in which you actually get your hands dirty with the game would have been better than just reading all information at first, since you may forget some small details while reading. However, the information you get is all really valuable, so you don’t want to skip it. Also, if you feel like revisiting the tutorial, you can do so later.

In case you haven’t played a tower defense game before, it is very simple. Enemies spawn from a specific point and travel through a path that leads to your base. If your base is invaded or destroyed, then it is game over. To avoid this, you build towers that slow down and kill your enemies.

Infinitode does not deviate a single bit from this concept. You get enemies spawning from one block, and they walk through a path. There are several kinds of enemies with different attributes, such as flying ones, enemies that walk really fast, others that have a strong defense but are slow, some have a certain weakness, and similar. When killing them, you earn gold, which you use to build and upgrade towers. 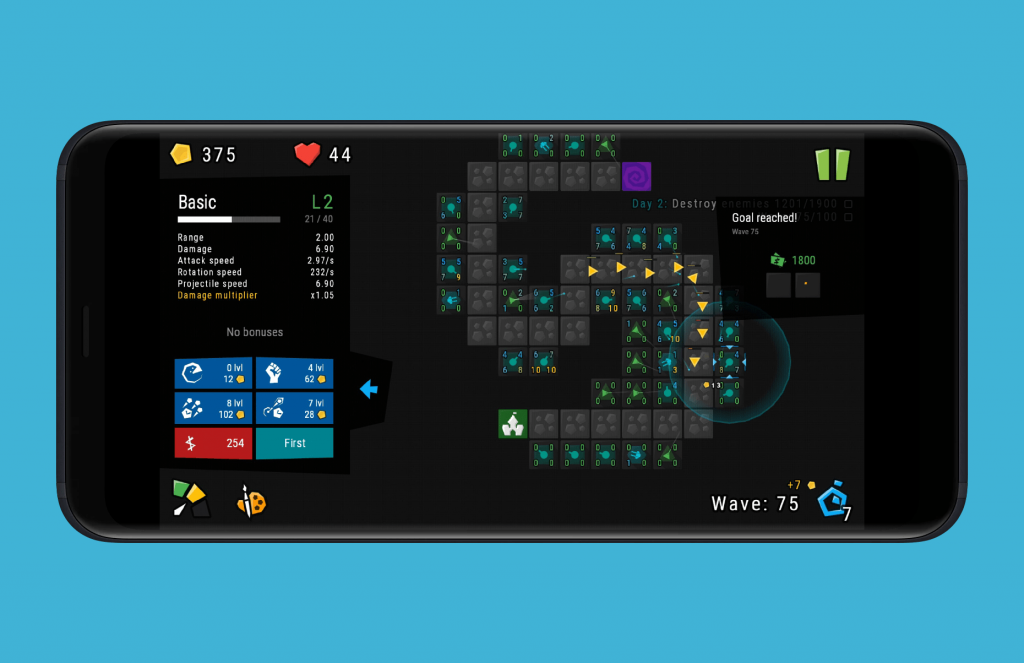 Just like your enemies, your weapons also have different attributes. You start with three: one that throws bombs quickly but doesn’t deal that much damage, a sniper that deals lots of damage but is slow, and one that targets only air units. However, you can get more afterwards. After building them, you can upgrade them in four different attributes: range, damage, attack speed, and rotation speed. The first three are self explanatory, but rotation speed is more uncommon. It deals with the speed at which your towers rotate after killing an enemy and targeting the next one.

As previously said, the biggest differentiating factor of Infinitode is the infinite part. The game keeps going until the HP of your base reaches zero. If that takes 200 waves to happen, then so be it. Knowing that this could get boring quickly, the developer added some tricks to make it better. For example, every now and then there are “boss waves,” which are waves that have a bunch of different types of enemies, making them particularly challenging. Also, there are daily goals, such as “kill 1900 enemies” or “clear 50 waves” that yield money.

When dying, even if you haven’t completed one of these goals, you also get money for your efforts. A game can easily last 20 minutes, so you better have some time to really invest in it. The progress can be saved mid-game though, so all is not lost in case you suddenly have a change of plans. 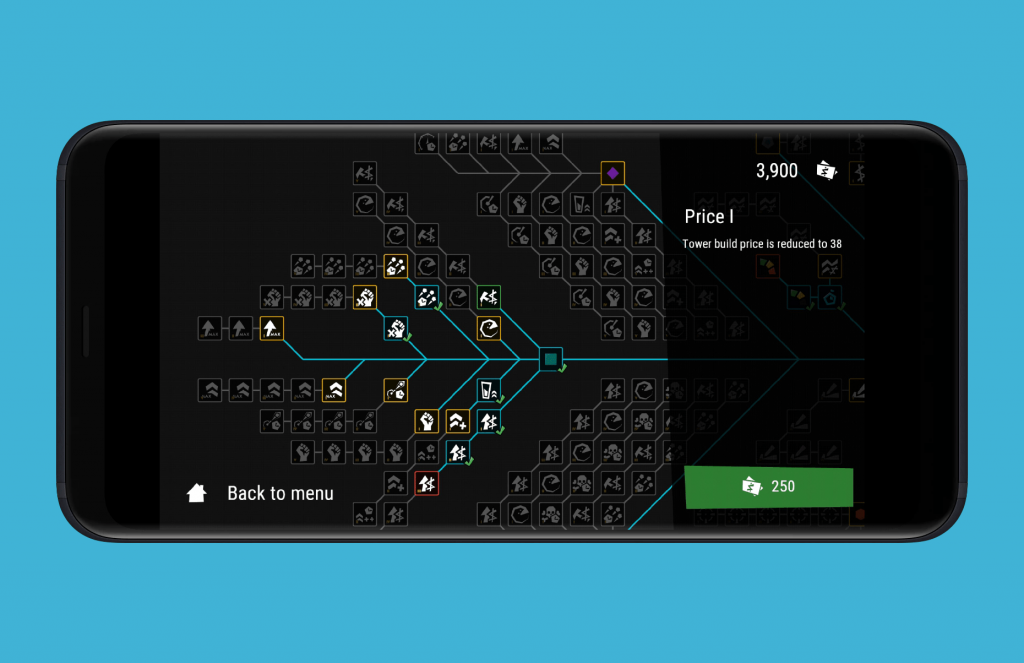 So, I mentioned that you could get more towers afterwards, and that clearing daily goals yield money. See the relation between them? If you go to the Upgrades option in the Main Menu, you get a HUGE progression tree, from which you can get new towers and make your game easier with the ones you already have. It is one of the biggest progression trees I have seen on a game. There are so many things to buy and upgrade that dramatically increase the replay value of this game.

In case you are lazy, you can also buy in-game money with off-game money (that is, your real money). There are only four different kinds of in app-purchases: three different amounts of money, and a double gain token that doubles the proceedings for each game you play. They are also price very competitively, so, since the game is free, you could easily buy one of these and actually get a decent amount of in-game currency while supporting the developers. 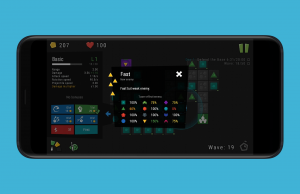 The fact that you can buy in-game currency does not mean that this game instantly becomes easier. You still have only one map available to you at first, and, apart from money, you need experience to open the 17 remaining levels. If that is not enough of a number to you, there is a map creator in which you can create your own maps in any way you like. It is pretty robust and adds a lot to the game, in case you are really into that kind of thing.

While other tower defense games focus on really flashy graphics, with over-the-top explosions, detailed towers, and complicated enemies, Infinitode has really simple graphics. That doesn’t mean that they are bad, though. Graphics are more than adequate for the game, and the developers do a really good job in making each asset very descriptive.

For example, the air enemy looks like helicopter blades seen from the top, the high-defense enemy is a red square, the icy enemy is a light blue ball, and the fast enemy is a yellow triangle. It’s not written anywhere that these colors and shapes are fast or heavy, but to me, they all make absolute sense.

Towers also follow the same philosophy. An air missile is light blue, a freezing tower is blue, a cannon tower is red, and a sniper has a triangle with a line at the top (kind of like a sniper looks when seen from above). In game, you can flip between showing the experience that your tower has, or the upgrades that you have done to it. 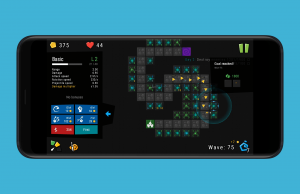 If there is one complain I have, is that sometimes the targets are very small to hit. I don’t have big hands, but I occasionally struggled with touching certain elements. You can zoom in and out of the battlefields, but menus and upgrade buttons are not zoomable, leaving a small target area to hit.

There is no music in-game, only sound effects. They get the job done without any bells and whistles. Almost everything you make has a sound effect, so at least you always have feedback on your actions, since visual feedback is not that prominent.

I did have some situations in which some sound effects didn’t play, especially when upgrading towers. However, most of the time they worked well enough.

Infinitode manages to add a lot of different elements into one game that works amazingly well. Solid tower defense gameplay, endless elements, huge progression tree, zero pesky ads or alerts to make you buy in-game currency, and sleek presentation make Infinitode a gem rarely seen on the Play Store. There’s enough content here to last your for hours, with all the different towers and maps you can unlock, and the upgrades you can buy afterwards. There are very few cons and a whole lot of pros in Infinitode, so make sure you give it a shot.

Download and install Infinitode from the Google Play Store.