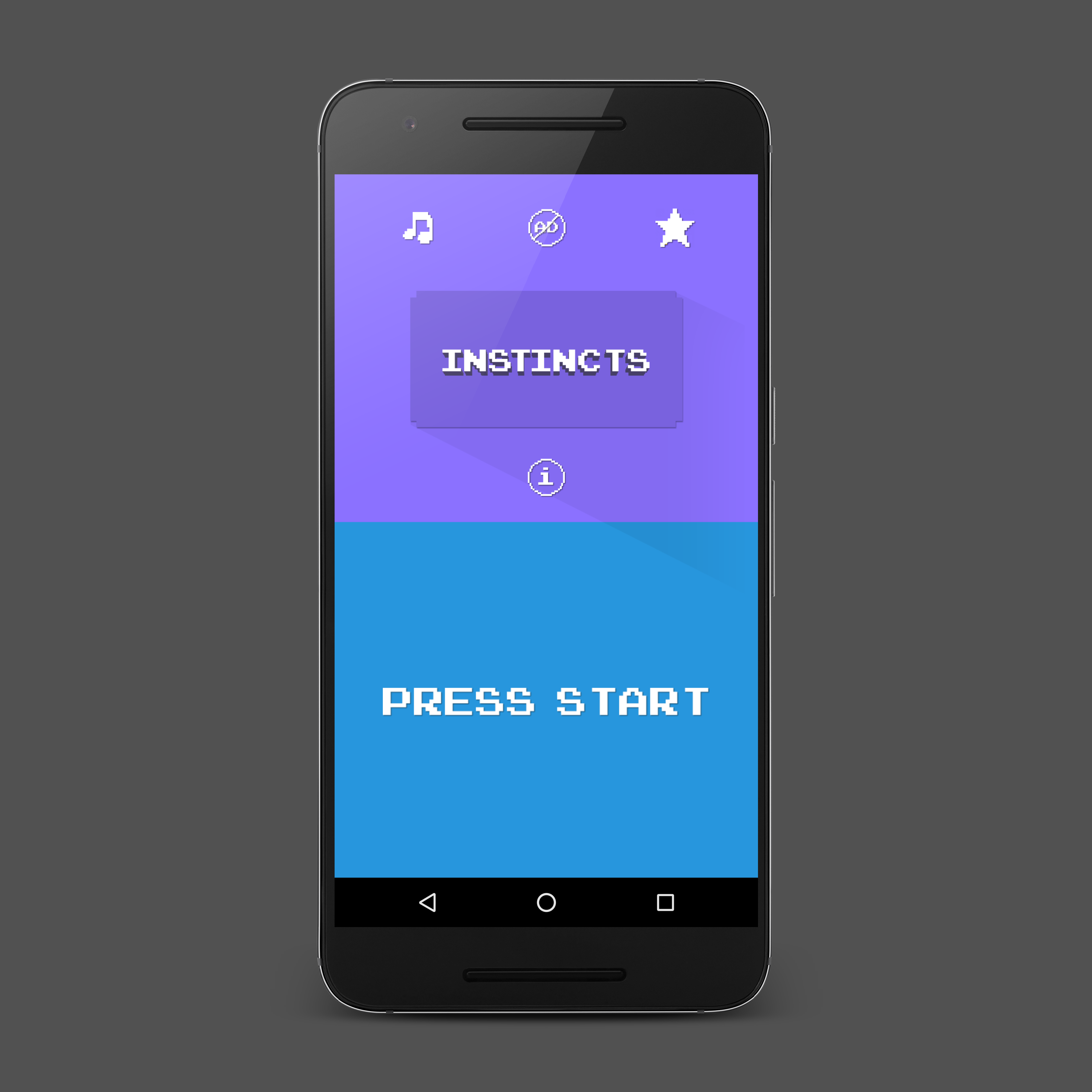 We’re always looking for things to tickle our nostalgia bone. Some of us use pictures, some of us pull out our old PS2 or NES system, and still others want something new that will pluck that heart string for them. Instincts is a cross between an endless runner and everyone’s favorite early video game, Space Invaders, and though it might not keep you coming back for more and more, it’s definitely something you’ll want to check out.

As with most games these days, there’s no setup necessary. Launch the game, it will ask you for Google Play Games access, and you’re good to go. Sticking to its retro theme, the game features a big “Press Start” message on its home screen. The gameplay mechanics are so simple that the game provides almost no tutorial. “Touch & drag to move your ship” are the only instructions you will receive. Ever.

The main objective of this game is to score as many points as you can while navigating your ship across several obstacles and walls. The method of scoring is rather peculiar because you have to smash barriers in order to increase it. These are clearly marked by a chequered flag pattern. The game will always make you choose between two (or more) paths: some will have obstacles and moving elements, and others will have the barriers previously mentioned. Also, barriers will appear in between these sections. It’s strange that the game never tells you how far have you travelled, but these barriers give the game another element of depth, instead of only depending on distance to measure score.

The negative aspect of this system is that you can have really good but short runs and bad runs in which you travel for a long distance. Since, before choosing the aisle, you can’t see anything of it, you are heavily reliant on luck in order to score. The game tries to mitigate this by interrupting the wall separating tracks with chequered barriers, so you can change between them while scoring points. Even with its flaws, it’s an interesting system that adds to the gameplay instead of hindering it.

Scenarios in Instincts feature clever layouts, with moving elements and colorful environments that change all the time. A big problem of these “endless” kind of games is the constant repetition of scenarios and puzzles. Instincts tries to keep these instances to a minimum, although I’ve been greeted sometimes with repeated puzzles in the same game. Nevertheless, the game makes up for it with its intricate and random gameplay.

Sometimes the walls start to compress around you, leaving your ship inside a very narrow tunnel which requires ultimate precision to navigate through; other times, the path ahead will directly close in front of you, leaving you no choice but to carefully change to another aisle. Sometimes elements will morph in some elaborate ways, forcing you to react quickly in order to avoid them. These components make the game harder without ever feeling cheap. Every time you crash your ship, you know it’s completely on you.

Do you remember how in old games, there was a section called “Unlockables,” which companies now greedily called DLC? When you crash your ship, Instincts will give you points according to the number of barriers you have smashed. These can be used to unlock new ships. From what I’ve seen, however, these ships do not affect the core gameplay; they are purely cosmetical. They all look cool, however, and they contribute to increasing the game’s replay value.

Graphics, as previously said, follow a retro look at all times. Sometimes, these games with retro-inspired graphics disrupt their own theme by showing some non-pixelated elements. However, all of the assets I’ve seen in Instincts feature pixelated borders, retro looks, and colorful backgrounds. Even the pause screen has legacy elements in mind, since it only shows a “Continue” button without other elements, just like games of yesteryear. Still, it’s impossible to turn a blind eye to that ad banner at the bottom of the screen. Also, after some games, Instincts will show you a full-screen ad. There’s a $1.99 in-app purchase to remove all ads if you wish.

The only option the game gives you is a toggle to turn the sound on or off. Background music in this game is a very relaxing tone that does not disturb gameplay. While sound effects are kept to a minimum, when they are actually used, they do a good job in adding to the experience. On a side note, even though there’s not much going on graphics or sound-wise, I’ve suffered from some slowdowns while playing the game. These happen rarely and go away after some seconds, but there are definitely some performance issues that need to be ironed out.

Instincts offers a simple, no-nonsense gameplay mechanic and does a good job in teleporting you to those glorious days of pixelated graphics and 8-bit soundtrack. The weakest point in this game is undoubtedly the replay value, since, apart from buying new starships and leaderboards, there’s not much else to do. Also, ads can be a bit annoying but, with a $1.99 in-app purchase, you can enjoy an ad-free experience. Nonetheless, it’s a fun, solid game for those times where you need to burn some minutes, all while paying tribute to the golden era of gaming.

Not all endless games are shallow: Alto’s Odyssey proves it (Review)

Rider: Get ready for some flipping, hard-to-control action (Review)